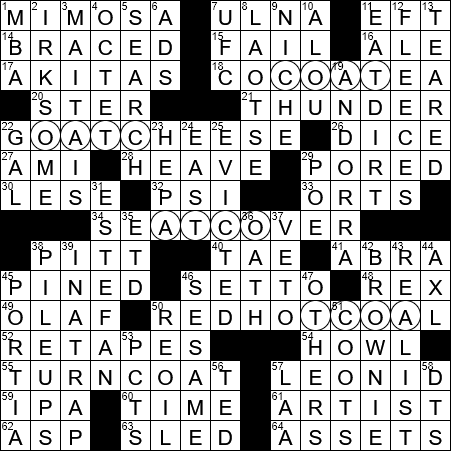 Each of today’s themed answers contain the letter string COAT. That string gets turned about, reordered, as we progress down the grid:

Feta is a Greek cheese made from sheep’s milk, or a mixture of sheep’s and goat’s milk. The cheese is salted and cured in a brine solution for several months before it is eaten.

Psi is the 23rd letter in the Greek alphabet, and the one that looks a bit like a trident or a pitchfork.

55. Traitor, and a literal hint to this puzzle’s circles : TURNCOAT

Leonid Brezhnev was the Soviet leader from 1964 until his death in 1982. Under Brezhnev, Soviet spending on the military grew to about 12.5% of the nation’s Gross National Product. This level of spending, without effective economic reform, led to the USSR’s “Era of Stagnation” that started in the mid-seventies. His large major political decision was to invade Afghanistan, a move that placed further strain on the fragile Soviet economy.

The Ultimate Fighting Championship (UFC) is a largest promoter in the world of mixed martial arts competitions. I think the idea is that competitors fight each other in various disciplines to see who is the “best of the best” …

Moises Alou played Major League Baseball, as did his father Felipe and his uncles Matty and Jesús.

19. Republic between Spain and France : ANDORRA

Air filters can be specified as HEPA, with the acronym standing for “high-efficiency particulate absorption”. To be given the name “HEPA”, the filter must remove 99.7% of particles with a size of 0.3 microns or larger.

29. Poet for whom the Edgar Awards are named : POE

45. “The Merchant of Venice” heiress : PORTIA

Geezer, codger and coot are all not-so-nice terms for an old man.

The actor Ted Danson is noted for in particular for three successful roles that he has played on television. He played Sam Malone on the sitcom “Cheers”, and the title role on the sitcom “Becker”. Danson is currently leading the cast on the drama series “CSI: Crime Scene Investigation”. Danson has been married to the lovely actress Mary Steenburgen since 1995.