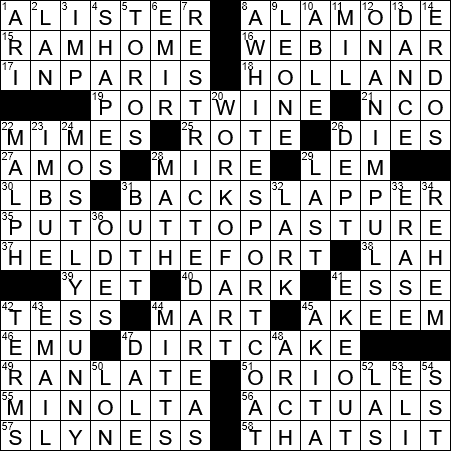 17 Visiting the Louvre, say : IN PARIS

Hollandaise sauce is a mixture of egg yolk and melted butter that is then seasoned, usually with lemon juice, salt and pepper. Hollandaise has an exalted position in French cuisine. Although the origin is debated, some say that the recipe was invented in the Netherlands and taken to France by the Huguenots, hence the name “Hollandaise”, meaning “of Holland”.

“Dark web” is the name given to content on the World Wide Web that requires specific software and/or authorization for access. The dark web is a subset of the “deep deb”, the collection of content on the Web that isn’t indexed by search engines. Dark web users refer to the regular Web that you and I access as “Clearnet”.

Hakeem Olajuwon is a retired Nigerian American basketball player. Hakeem was born in Lagos in Nigeria, and came to the US to play for the University of Houston. He was drafted by the Houston Rockets in 1984, ahead of the likes of Charles Barkley and Michael Jordan.

47 Dessert made with Oreos : DIRT CAKE

The Baltimore Orioles (also, the O’s, the Birds”) are one of the eight charter teams of MLB’s American League, so the franchise dates back to 1901. Prior to 1901, the team had roots in the Minor League Milwaukee Brewers, and indeed entered the American League as the Brewers. In 1902 the Brewers moved to St. Louis and became the Browns. The team didn’t fare well in St. Louis, so when it finally relocated to Baltimore in the early fifties the team changed its name completely, to the Baltimore Orioles. The owners so badly wanted a fresh start that they traded 17 old Browns players with the New York Yankees. The trade didn’t help the team’s performance on the field in those early days, but it did help distance the new team from its past.

Ari Fleischer was White House Press Secretary for President George W. Bush. Fleischer now runs his own media consulting firm that specializes in representing sports players and organizations. Fleischer helped Mark McGwire handle the media when he had to admit to the use of steroids, and was briefly hired by Tiger Woods as he planned his return to the PGA after dropping out of the spotlight to handle the problems in his personal life.

“A White Sport Coat” is a 1957 country song written and recorded by Marty Robbins. According to Robbins, he passed a high school while being driven to a venue in Ohio and passed some students dressed for their prom. He wrote the song in 20 minutes, before the car ride had finished.

Marty Robbins was a country singer-songwriter from a suburb of Phoenix, Arizona. Off the stage, Robbins was an avid fan of NASCAR and participated in quite a few races, with six finishes in the top ten.

The thickness unit known as a “mil” here in the US is usually referred to as a “thou” on the other side of the Atlantic. A “mil” is actually one thousandth of an inch. So, I vote for “thou” …

Paul Erdős was a famous Hungarian mathematician, and a very prolific writer. Erdős published more papers than any other mathematician in history.

On the sitcom “Happy Days”, the character Ralph Malph is played by Donny Most. Ralph and Potsie are Richie Cunningham’s good friends.

To imbue is to pervade, to soak in. “Imbue” has the same etymological roots as our word “imbibe”.

Skull and Bones is a secret society at Yale University, founded in 1832. The society is well-funded, and even owns a 40-acre island in Upstate New York that members and alumni use as a retreat. Noted members of Skull and Bones included William F. Buckley, Jr., President Bush (both father and son) and Senator John Kerry. And President William Howard Taft was the son of one of the society’s founders. “Bones” was a male-only society right up until 1991, when alumni voted to accept female members.