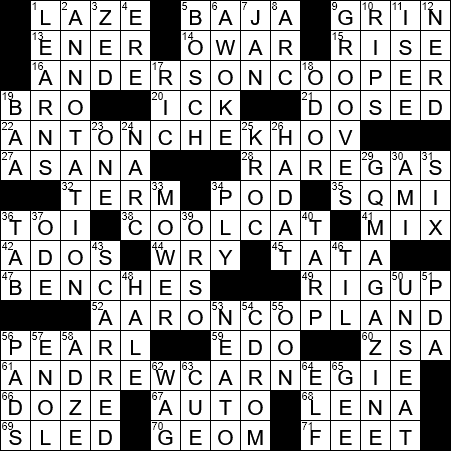 Themed answers are famous people with the initials “AC”. Given that AC is an abbreviation for “air conditioning”, then those people might be described as “cool” cats:

13. Cabinet dept. with an oil derrick on its seal : ENER

Anderson Cooper is a respected news personality on CNN and on various shows around the dial. My favorite appearances of his, although he would call them trivial I am sure, was as host of a great reality game show called “The Mole” that aired in 2001.

Anton Chekhov’s play “Uncle Vanya” was published in 1897. It is not really an “original” work, in the sense that it is a reworking of a play he wrote and published a decade earlier called “The Wood Demon”.

The rare gases are better known as the noble gases, but neither term is really very accurate. Noble gas might be a better choice though, as they are all relatively unreactive. But rare they are not. Argon, for example, is a major constituent (1%) of the air that we breathe.

Krypton was discovered in 1898 by two British chemists Sir William Ramsay and Morris Travers. They chilled a sample of air, turning it into a liquid, and then warmed the liquid and separated out the gases that boiled off. Along with nitrogen, oxygen and argon (already known), the pair of scientists discovered two new gases. The first they called “krypton” and the second “neon”. “Krypton” is Greek for “the hidden one” and “neon” is Greek for “new”.

Xenon was the first of the noble gases to be made into a compound, which was somewhat remarkable in that the noble gases were thought by many to be completely inert, unreactive.

Talk show host and comedian David Letterman has been appearing on late night television since 1982. Letterman had the longest late-night hosting career on US television, even longer than the iconic Johnny Carson.

Zsa Zsa Gabor was a Hungarian American actress, born in Budapest as Sári Gábor (the older sister of the actress Eva). Zsa Zsa Gabor was married a whopping nine times, including a 5-year stint with Conrad Hilton and another 5 years with the actor George Sanders. One of Gabor’s famous quips was that she was always a good housekeeper, as after every divorce she kept the house!

Our word “geometry” comes from Greek. The Greek “geometria” translates as “geometry, measurement of earth or land”. Hence, there is a link between terms like “geography” and “geology”, and the mathematical word “geometry”.

Actor Titus Welliver is probably best known for recurring appearances in TV shows. Perhaps most notably, he played the “Man in Black” in the show “Lost”, and the title character in the excellent Amazon web TV show “Bosch”.

Ric Ocasek is an American musician of Czech heritage. He was the lead vocalist of the rock band known as the Cars.

A buffoon is a clown or jester, although the term “buffoon” tends to be used more figuratively to describe someone foolish and ridiculous. The term comes from the Italian “buffa” meaning “joke”.