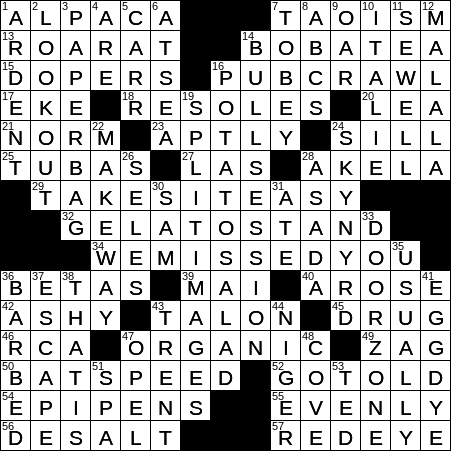 Alpacas are like small llamas, but unlike llamas were never beasts of burden. Alpacas were bred specifically for the fleece. Alpaca wool is similar to that of a sheep, but it is much smoother and lacks lanolin, which makes it relatively hypoallergenic. There are no known wild alpacas these days, even in their native Peru.

Bubble tea, sometimes called boba tea, is a tea-based drink from Taiwan. The “bubbles” are chewy tapioca balls that are usually added to the drink.

Akela is the wolf in the “Jungle Book” by Rudyard Kipling. He gave his name to a cubmaster in the scouting movement, now known as “Akela”.

Melotone Records was a record label in the 1930s. It specialized in supplying budget-priced 78 rpm discs, and so became quite popular during the Depression Era. Three Melotone records sold for a dollar in 1932.

EpiPen is a brand name of epinephrine auto-injector. An EpiPen delivers a measured dose of epinephrine, which is a common treatment for an extreme allergic reaction.

2018s Carr Fire was, at the time, the sixth-most destructive fire in the history of California. It destroyed over 1,600 homes and other structures in the northwest of the state. The fire started accidentally when a tire on a towed trailer blew out causing the steel rim to scrape along the road surface. The sparks that were generated set fire to dry vegetation along the edge of the highway.

“Italie” is the French word for “Italy”.

Ballet is a type of dance that originated in Italy during the Renaissance. The term “ballet” ultimately derives from the Greek “ballizo” meaning “to dance”.

English novelist Anna Sewell only wrote one book in her life, which was the immensely popular “Black Beauty” first published in 1877. The book was written at the tail end of Sewell’s life, over a period of six years while her health was declining. “Black Beauty” was an immediate success, and is supposedly the sixth best selling title in the English language. Sewell died just five months after the book was published, but she did get to see its immediate success.

“I Am Malala: The Story of the Girl Who Stood Up for Education and Was Shot by the Taliban” is a memoir co-written by Malala Yousafzai and British journalist Christina Lamb. The title tells the essence of Malala’s story. She started a blog when she was 11 or 12 that outlined her life in northwest Pakistan under occupation by the Taliban. As the Pakistani military regained control of the area, Malala’s story was related in a documentary and she gave frequent interviews. One day a gunman came looking for her, and found her on a school bus. He shot Malala three times, with one bullet going into her forehead. She survived, and was taken to England to recuperate. She was a co-recipient of the Nobel Peace Prize in 2014 at the age of 17, making her the youngest ever Nobel laureate.

The phrase “bull session” was popularized by American college students in the 1920s. The term refers to a discussion, particularly between male friends.

19. Elmore Leonard novel whose title overlaps itself on some covers : SPLIT IMAGES

“Split Images” is a 1981 crime novel by Elmore Leonard. It’s about a Florida playboy who gets a kick out of murdering people.

Elmore Leonard used to write a lot of westerns in the fifties and moved onto crime and suspense novels later in his career. A lot of his books have made it to the big screen, including “Get Shorty” and “Mr Majestyk”.

Lynyrd Skynyrd is a southern rock band that formed in 1964 in Jacksonville, Florida as My Backyard. The name was changed to “Leonard Skinnerd” in 1969, and then to “Lynyrd Skynyrd” a few months later. The chosen name was a wry tribute to the member’s phys-ed teacher at high school, one Leonard Skinner. Lynyrd Skynyrd were most successful in the 1970s, when they recorded their two biggest hits: “Sweet Home Alabama” and “Free Bird”. Sadly, three of the original band members were killed in a plane crash in 1977.

The famous “I want YOU for the US Army” poster dates back to 1917. It depicts Uncle Sam pointing to the viewer, encouraging young men to report to the nearest recruiting station. The poster was designed by J. M. Flagg and is based on the similar British poster showing Lord Kitchener that was first issued three years earlier.

“Pen” is a slang term for “penitentiary”. Back in the early 1400s, a penitentiary was a place to do “penance”, a place of punishment for offences against the church.