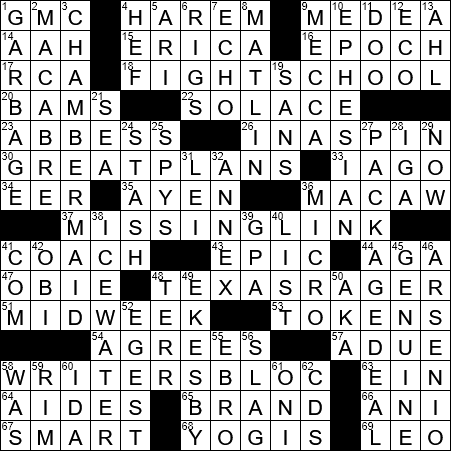 Themed answers are common phrases that are MISSING the letters LINK, in order as we descend the grid:

The GMC Yukon is basically the same vehicle as the Chevrolet Tahoe.

Harem pants are an item of female clothing that originated in the Arabian Peninsula. They are loose fitting pants that gather at the ankle. The pants worn by belly dancers would be called harem pants.

In Greek mythology, Medea was the wife of Jason, the heroic leader of the Argonauts. Medea was a sorceress who pledged to help Jason in his search for the Golden Fleece, on condition that he take her as his wife. According to some accounts, Jason left Medea and took up with Glauce, the daughter of the king of Corinth. Medea got her own back by sending Glauce a golden coronet and a dress that were covered with poison. The poison killed Glauce, and her father the king. To further her revenge on Jason, Medea killed two of her own children that were fathered by him.

The original pamphlet was a unbound treatise back in the late 1500s. The term “pamphlet” came from “Pamphilus, seu de Amore” (“Pamphilus, or about Love”), which was a Latin love poem that was very popular and widely copied in the Middle Ages. The term “pamphilus” comes from the Greek for “loved by all”.

A sword-and-sandal genre of film comprises Italian-made biblical costume dramas that were produced by the Italian movie industry in the late fifties and early sixties. Unlike Hollywood epics of the time like “Spartacus” and “The Ten Commandments”, the Italian versions were dubbed. The italian film industry turned away from sword-and-sandal movies fairly decisively to spaghetti westerns.

The Texas Rangers are a law enforcement agency that has been around since 1835, although an unofficial force existed since 1823.

The phrase “hump day” is very North American. It refers to Wednesday, which is the middle day (the hump) of a typical work week.

57. Musical collaboration instruction : A DUE

Aachen is a city in the very west of Germany, right on the border with Belgium and the Netherlands. In English, we quite often refer to this city by its French name, Aix-la-Chapelle.

Léo Delibes was a French composer, famous for the ballets “Coppélia” and “Sylvia”, as well as the operas “Le roi l’a dit” and “Lakmé”. Even non-fans of ballet or even classical music will recognize Delibes’ “Divertissement – Pizzicato from ‘Sylvia’”.

Edgar Allan Poe (EAP) lived a life of many firsts. Poe is considered to be the inventor of the detective-fiction genre. He was also the first notable American author to make his living through his writing, something that didn’t really go too well for him as he was always financially strapped. In 1849 he was found on the streets of Baltimore, delirious and in dire need of medical help. Poe died a few days later in hospital at 39 years of age.

Paulette Goddard was a Hollywood actress, one most famous on the screen as the leading lady in the Charlie Chaplin movies “Modern Times” and “The Great Dictator”. Goddard and Chaplin lived as husband and wife for several years and apparently married in secret in Canton, China in 1936. The couple were granted a Mexican divorce in 1942.

“The Diary of a Chambermaid” is a 1946 film that is based on a 1900 novel of the same name by Octave Mirbeau. The title role is played by Paulette Goddard. She is a chambermaid who attracts the attention of two characters played by Burgess Meredith and Hurd Hatfield. Spoiler alert: Hatfield’s character wins out in the end.

Hugh Hefner (often called “Hef”) was from Chicago. His first publishing job was in the military, where he worked as a writer for a US Army newspaper from 1944-46. He went to college after his military service and then worked as a copywriter for “Esquire” magazine. He left “Esquire” to found his own publication that he called “Playboy”, which first hit the newsstands in 1953. “Playboy” has been around ever since.

8. Only deaf performer to win an Oscar : MATLIN

Marlee Matlin won her well-deserved Oscar for the role she played in “Children of a Lesser God”. Matlin played opposite William Hurt in the movie, and won her Academy Award in in 1986 when she was just 21 years old. My favorite performance of hers though, was the recurring role she had in “The West Wing”.

It seems that the Epistle of Paul to the Ephesians (Eph.) is now regarded by scholars as written “in the style of Paul” by someone who was influenced by Paul’s thought.

The American Hockey League (AHL) is the so-called development circuit for the National Hockey League (NHL), the equivalent of the minors in professional baseball. The AHL’s playoff trophy is called the Calder Cup, which is named for Frank Calder who was the first president of the NHL.

“Richard III” is one of the more famous of William Shakespeare’s historical plays. A well-known 1955 version of the play was made for the big screen with Laurence Olivier playing the title role. The most oft-quoted words from “Richard III” are probably the opening lines “Now is the winter of our discontent/Made glorious summer by this sun of York”, and Richard’s plea at the climax of battle “A horse, a horse, my kingdom for a horse!”

The Office of Naval Intelligence (ONI) is the oldest of the US intelligence services. The ONI was set up in 1882 to determine the state of advancement of foreign naval forces.