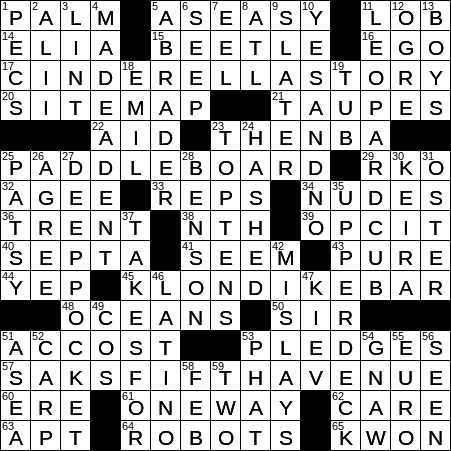 The evidence seems to suggest that the phrase “as easy as pie” is a reference to the ease of eating a pie, rather than baking a pie.

The folk tale about “Cinderella” was first published by French author Charles Perrault in 1697, although it was later included by the Brothers Grimm in their famous 1812 collection. The storyline of the tale may date back as far as the days of Ancient Greece. A common alternative title to the story is “The Little Glass Slipper”.

A site map is a hierarchical list of pages on a web site. A well-designed site map can be useful to site visitors, but is more commonly used by search engines to get a complete and accurate picture of a site so that it is correctly represented in search results.

The delicious treat made from an ice cream square covered with chocolate is actually called a “Klondike”, and not the oft-cited “Klondike Bar”. The Klondike “bar” was introduced in the early 1920s and takes its name from the Klondike River of Yukon, Canada.

Charles Atlas’s real name was Angelo Siciliano, an Italian who moved to America in his teens. The story he told, and turned into a great advertising campaign, was that as a 97-pound weakling he once had sand kicked into his face by a bully. He went on a bodybuilding regime, developed his muscles, and then marketed the concept across America. He took the name “Charles Atlas” after he was told that his new-found body looked like that of a statue of the Greek god Atlas sitting on top of a hotel in Coney Island.

Christian Slater is an actor from New York City. My favorite roles that he has played are in “Broken Arrow” with John Travolta, and on the TV series “The West Wing”.

13. First and last word of a common four-word saw : BOYS

Boys will be boys …

Emil Skoda, M.D. is a character who has turned up on several crime shows on television: “Law & Order”, “Law & Order: Special Victims Unit”, “Law & Order: Criminal Intent” and “New York Undercover”. Skoda is a psychiatrist who works with NYPD, and is portrayed by actor J. K. Simmons (the guy in the Farmers Insurance TV ads).

Sir Oliver “Daddy” Warbucks is a principal character in the comic strip “Little Orphan Annie” that was created by Harold Gray. Warbucks made “ten zillion dollars” as an industrialist after WWII, and became a father figure for Annie after she was taken in by his wife. IN the 1982 musical film “Annie”, Warbucks was portrayed by Albert Finney.

Ezra Taft Benson was the thirteenth president of the Church of Jesus Christ of Latter Day Saints, serving from 1985 until 1994. Benson was also the US Secretary of Agriculture in the Eisenhower administration.

The English actress Keira Knightley had her big break in movies when she co-starred in 2002’s “Bend It Like Beckham”. Knightley played one of my favorite movie roles, Elizabeth Bennett in 2005’s “Pride and Prejudice”. Knightley won a Golden Globe for that performance, although that 2005 film isn’t the best adaptation of Austen’s novel in my humble opinion …

“Bodega” is the Spanish term describing a winery, or these days a grocery store.

“Fortune” is a tri-weekly business magazine that was founded by Henry Luce in 1930, just four months after the 1929 Wall Street Crash. “Fortune” is noted for its annual ranking of companies by revenue, especially the Fortune 500.

In French, one might deposit one’s euros in “la banque” (the bank).