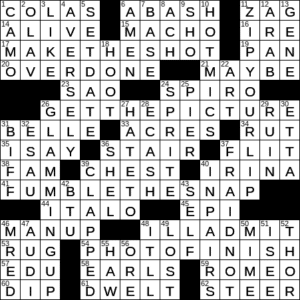 Themed answers each FINISH with a synonym of “PHOTO”:

A macho man is one showing pride in his masculinity. “Macho” is a Spanish word for “male animal”.

Olga, Masha and Irina are the “Three Sisters” in the play by Anton Chekhov. The three title characters were inspired by the three Brontë sisters, the English authors.

41 Mess up a football hike : FUMBLE THE SNAP

45 Prefix with center or dermal : EPI-

Sprite is Coca-Cola’s answer to the very successful soft drink 7UP. Sprite was introduced in 1961, and Coca-Cola used its muscle to topple 7UP from its dominant position in the market. Sprite has been the number-one selling lemon soda since 1978.

Biff Tannen is the bully character in the “Back to Future” trilogy. He is played by Thomas F. Wilson.

In the fun 1985 movie “Back to the Future”, Marty McFly finds himself back in 1955, and is trying to get back to HIS future, 1985. But on the other hand, 1985 is really Marty’s present, before he went back in time. Why does time travel have to be so complicated …?

Author Shel Silverstein had a varied career and did a lot more than write books. Silverstein was a poet, composer, cartoonist and screenwriter among other things. One of his successful children’s books is “A Light in the Attic”, a collection of poems that was first published in 1981. Some parents have tried to get the book banned from libraries. The collection includes the poem “How Not to Have to Dry the Dishes”, which encourages disobedience and making a mess. Scandalous …

40 How ark creatures boarded : IN PAIRS

46 TV horse who “will never speak unless he has something to say” : MR ED

52 Superhero with a hammer : THOR