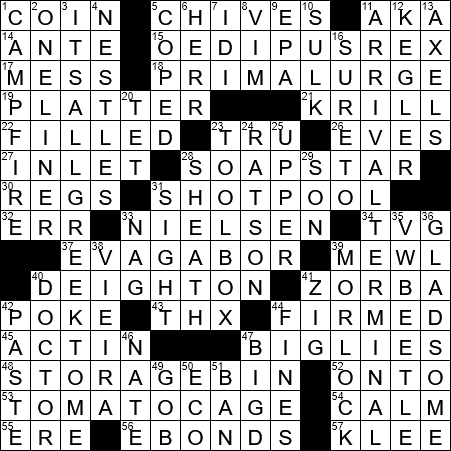 I’m guessing that the notorious Wild West outlaw Billy the Kid was of Irish stock as his family name was McCarty. Although he usually used the alias William H. Bonney, another indication of an Irish connection is that he also went by William Antrim, Henry Antrim and Kid Antrim, as Antrim is one of the six counties in the north of Ireland.

“Oedipus Rex” (also “Oedipus the King”) is a tragedy penned by the Ancient Greek playwright Sophocles. The play tells the story of Oedipus, a man who becomes king of Thebes. Famously, Oedipus was destined from birth to murder his father and marry his mother.

An oedipal relationship is one in which a child exhibits sexual desire for the parent of the opposite sex. A child exhibiting such behavior is said to have an Oedipus complex, named for the play “Oedipus Rex” by Sophocles.

According to Freudian psychology, we have an instinctive sexual appetite that develops in five phases, named for the erogenous zones that are the source of the drive in each phase. They are:

“Tru” was written by Jay Presson Allen and is a one-man play about Truman Capote that premiered in 1989. There is a classic anachronism in the piece. It is set in Capote’s New York City apartment at Christmas 1975. At one point the Capote character talks about suicide, saying that he has enough pills to stage his own Jonestown Massacre. The Jonestown Massacre didn’t happen until three years later, in 1978.

That would be a billiard parlor.

37 Actress who voiced Duchess in “The Aristocats” : EVA GABOR

The film “Zorba the Greek” and the musical “Zorba” are adaptations of the 1952 novel “Zorba the Greek” by Nikos Kazantzakis. The 1964 film version stars Anthony Quinn in the title role, and Alan Bates. The movie is set and was filmed on location on the island of Crete, the home of author Kazantzakis.

In 1622, Pope Gregory XV established a committee of cardinals charged with “propagating the faith”, with responsibility for missions aimed at growing the Roman Catholic Church. The committee was called “Congregation de Propaganda Fide”, using the Latin word “propaganda”, the feminine gerund of the verb “propagare” meaning “to propagate”. In the 18th century, the word “propaganda” from the committee’s name came to describe dissemination of a doctrine in general. During WWII, the term developed a negative connotation, which exists to this day.

“I kissed thee ere I killed thee, no way but this, Killing myself, to die upon a kiss.” is a line from Shakespeare’s “Othello”. The words are spoken by Othello as he kisses his wife Desdemona, whom he has just strangled, and then takes his own life in repentance.

Artist Paul Klee was born in Switzerland, but studied art in Munich in Germany. You can see many of Klee’s works in the San Francisco Museum of Modern Art. If you get to Bern in Switzerland, even more of them can be seen at the Zentrum Paul Klee that was opened in 2005. Klee’s most celebrated work is his pointillist painting from 1932 called “Ad Parnassum”, which is owned by the Kunstmuseum, also located in Bern.

The phrase “it’s all Greek to me” is used to describe something that is difficult to understand. It’s possible that idiom’s use in English comes from an old Latin phrase “Graecum est; non legitur” (It is Greek; it cannot be read). The first use recorded in English dates back to 1599 when it appears in William Shakespeare’s play “Julius Caesar” in lines spoken by Casca:

Nay, an I tell you that, I’ll ne’er look you i’ the face again: but those that understood him smiled at one another and shook their heads; but, for mine own part, it was Greek to me.

12 Seeker of turkeys in alleys? : KEGLER

A kegler is a person who plays ten-pin bowling. “Kegel” is a German word meaning “bowling pin”.

There is a suggestion that the use of the term “turkey” to describe three strikes in a row in bowling arose in the late 1700s. Playing conditions back them made it very difficult to bowl one strike, never mind three. Also, prizes awarded were often items of food. A values prize, particularly around Thanksgiving, was a turkey, and it was awarded for bowling three strikes in a row.

“Punch buggy” is a game played by kids riding in a car. The idea is that players punch each in the arm when they spot a Volkswagen Beetle on the road.

“25 Words or Less” is a game show that is based on the board game of the same name. Hosted by Meredith Vieira, the show first aired in 2018.

The iconic science-fiction television show “Doctor Who” first aired in 1963 on the BBC, and relaunched in 2005. The relaunched series is produced in-house by the BBC in Cardiff in Wales, the location that is the setting of the successful “Doctor Who” spin-off called “Torchwood”. The new show is about the Cardiff branch of the Torchwood Institute which investigates incidents involving extraterrestrials. Why “Torchwood”? Well, “Torchwood” is an anagram of “Doctor Who”.

46 Archibald of the NBA : NATE

Nate Archibald is a retired basketball player who played mainly for the Kansas City Kings and the Boston Celtics. Archibald could get the ball in the basket, but was also willing to pass to a teammate when advantageous. He is the only player to lead the league in assists and scoring in the same season.

The Dallas Cowboys play in the National Football Conference (NFC) of the NFL. The Cowboys are famous for a lengthy streak of 20 consecutive winning seasons, from 1966 to 1985. They are the highest-valued sports franchise in the country. The only team in the world that’s worth more money is the UK’s Manchester United soccer team.