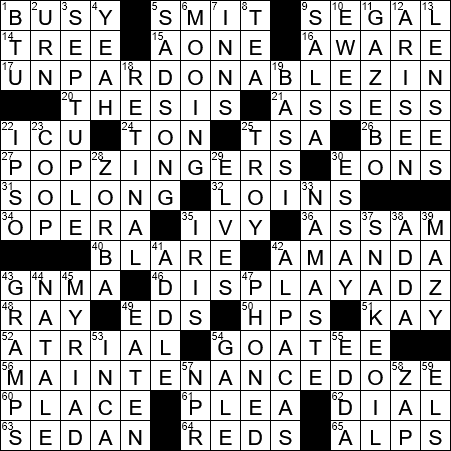 Today’s Theme (according to Bill): S to Z

Themed answers are common phrases with a letter S changed to a letter Z:

“Smitten” is a past participle of “smite” meaning “to inflict a heavy blow”. We tend to use “smitten” to mean “affected by love, love-struck”.

Actor George Segal was one of my favorite Hollywood stars when I was growing up. I most remember him from the dramatic role he played in 1966’s “Who’s Afraid of Virginia Woolf?” alongside Richard Burton and Elizabeth Taylor, and the comedic role he played in 1973’s “A Touch of Class” opposite Glenda Jackson. Segal has made a successful transition to television in recent years, playing lead roles on the sitcoms “Just Shoot Me!” and “The Goldbergs”.

“The Goldbergs” is a very entertaining sitcom that started airing in 2013. The show was created by Adam F. Goldberg and is based on Goldberg’s own childhood and family. My favorite part of the show comes at the end of each episode, when a clip from Goldberg’s real home movies is shown, which clip relates back to that episode’s storyline.

The Transportation Security Administration operates its a precheck program known as “TSA Pre✓” or “TSA PreCheck”). Members of the program receive expedited screening at airports at most airports. In order to become a member, a traveler must apply online, appear in person at a designated office for a background check and fingerprinting, and pay a fee for a 5-year membership.

“Fidelio” is Ludwig van Beethoven’s one and only opera, and a work that he really struggled with. “Fidelio” tells of a woman named Leonore who disguises herself as a prison guard in order to get her condemned husband out of prison.

“Scarecrow and Mrs. King” is a TV show that originally aired in the mid-eighties starring Brice Boxleitner and Kate Jackson in the title roles. Jackson is the actress who played Sabrina Duncan in the seventies show “Charlie’s Angels”.

“Ginnie Mae” is the familiar nickname for the Government National Mortgage Association (GNMA), a government-owned corporation created in 1968 with the objective of promoting home ownership. The “Ginnie Mae” nickname is derived from the GNMA abbreviation.

The Department of Housing and Urban Development (HUD) has its roots in the “Great Society” program of President Lyndon Johnson. HUD’s mission is to address the housing needs of the citizenry at the national level. HUD can provide mortgage insurance to help people become homeowners and also provide rental subsidies to lower-income families. HUD also is responsible for enforcement of Federal Fair Housing laws.

“Kay” and “Kitty” are common nicknames for “Catherine”.

52 Pertaining to a heart chamber : ATRIAL

A goatee is a beard formed by hair on a man’s chin. The name probably comes from the tuft of hair seen on an adult goat.

“Teen Angel” is a popular song written by Jean Dinning and released by her husband Mark Dinning in 1959. The story told in the song is tragic in the extreme, involving a girl who gets run over by a train.

“Leader of the Pack” was a number-one hit for the Shangri-Las in 1964. It is a classic example of a teenage tragedy song, a genre that was popular in the late fifties and early sixties. Betty loves Jimmy, who is the leader of a motorcycle gang. Betty has to dump Jimmy because her parents don’t want her to date someone from “the wrong side of town”. A tearful Jimmy speeds away, crashes his motorcycle and dies. Tragic …

A gazebo is a roofed structure, often octagonal in shape, that is found mainly in public spaces. Gazebos can be quite small, or can be large enough to perhaps serve as a bandstand. The actual etymology of the term “gazebo” seems to be a bit of a mystery, and there are some misconceptions out there.

An iris scan is a method of biometric identification. It relies on the fact that the complex patterns in the irises are unique to an individual. Not that an iris scan differs from a retinal scan. The latter uses technology that scans the unique pattern of blood vessels in an individual’s retina.

Michel de Montaigne was a prominent writer of the French Renaissance. He is noted for making popular the essay (“essai” in French) as a legitimate genre of literature.

In the Hindu tradition, “namaste” is a respectful greeting meaning “I bow to the divine in you”. The greeting usually includes a slight bow made with the palms of the hand pressed together, pointing upwards in front of the body.

In Greek mythology, the goddess Iris was viewed as the link between the gods and humanity, a messenger. She was also the goddess of the rainbow. In Virgil’s “Aeneid”, Iris takes the form of a Trojan woman and incites other Trojan mothers to set fire to Aeneas’ ships, preventing them from leaving Sicily.

A gale is a very strong wind, a wind that is defined by the Beaufort wind scale as a wind with speeds from 50 to just over 100 kilometers per hour.

The Poetic Edda and Prose Edda are two ancient works that are the source for much of Norse mythology. Both Eddas were written in the 13th century in Iceland.

The leading letters in the phrase “Little League” are letters L (els).