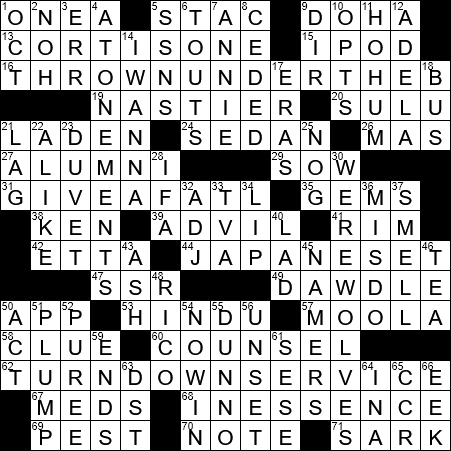 Themed answers each end with a kind of SERVICE. That SERVICE TURNS DOWN from the across-direction in the grid to the down-direction:

Cortisone is a type of steroid that is used to reduce inflammation, which can reduce pain caused by some medical conditions. It is usually administered using a syringe, as a shot.

A sedan chair was a litter that was used in England. Being a litter, it had no wheels and was powered by humans. Most sedan chairs were built for one passenger, with two men providing the “lift”. Henry VIII had a sedan chair, but towards the end of his opulent life he needed four strong men to carry it.

In Spanish, one might request “uno mas” (one more) in a “cantina” (canteen, café).

7 Musical in which FDR is a character : ANNIE

The Broadway musical “Annie” is based on the Harold Gray comic strip “Little Orphan Annie”. There have been two film adaptations of the musical. Both were really quite successful, including one released in 1982, directed by John Huston of all people. It was his only ever musical.

“A Passage to India” is a wonderful 1924 novel by E. M. Forster set in the days of the British Raj. There are two excellent adaptations for the screen that I would recommend. There’s a BBC television version from 1965 starring a wonderful cast including Virginia McKenna and Cyril Cusack. There is also an Oscar-winning movie version from 1984 with Alec Guinness and Peggy Ashcroft. Forster had first-hand knowledge of life during the Raj, having worked in India during the twenties.

A busboy is a person who assists a waiter, mainly by clearing tables. The verb “to bus” arose in the early 1900s and is probably a reference to the wheeled cart that was used to carry dishes.

A duvet is a large flat bag that is filled with down, feathers or a synthetic substitute that is used as a top cover for a bed. Although a duvet is similar to what is called a “comforter” in the US, there is a difference. A duvet is often has an easily removed cover that is usually laundered at the same time as the bottom sheet and pillowcases. We use them a lot in Europe, and generally without a top sheet due to the ease of laundering.

30 Subjects of European trials during the Renaissance : WEREWOLVES

The prefix “were-” as in “werewolf” derives from an old word “wer” meaning “man”. Hence a werewolf is a “man-wolf”.

The persecution of women labeled as witches in the Late Middle Ages and Early Modern Period was relatively widespread. “Witch trials” took place right across Europe as well as in the New World. A parallel labelling of some men as werewolves emerged from the persecution of females. “Werewolf trials” started in the early 15th century in what is now Switzerland, and spread across Europe, lasting until the late 17th and early 18th centuries.

The Social Security Administration (SSA) publishes a list of the 1,000 most common baby names for the prior year annually, just before Mother’s Day. The list is compiled using applications for Social Security cards.