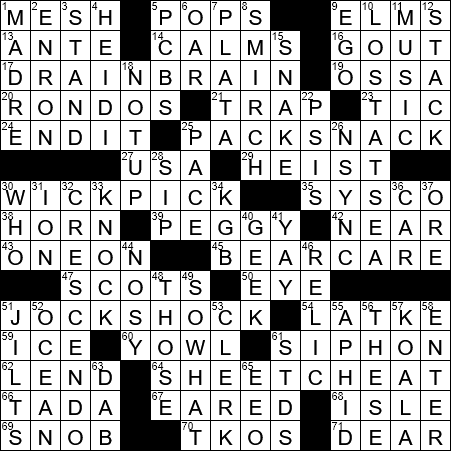 Today’s Theme (according to Bill): The First Shall Be Last

Themed answers are common two-word phrases with the order of those words flipped:

Gout is caused by an elevation of the levels of uric acid in the blood. As a result of the high concentrations, the uric acid can crystallize out in tissue causing extreme discomfort. What we tend to call gout occurs when the crystals are deposited in the big toe. Gout is sometimes referred to as “the disease of kings” or “the rich man’s disease”, as it is associated with a traditionally opulent diet.

The term “brain drain” arose in Europe after WWII when it was used to describe the emigration of scientists and technologists to North America. The corresponding positive effect, experienced by the receiving locale, is “brain gain”.

Mount Ossa is the highest mountain in the Australian island state of Tasmania. The peak was named for Mount Ossa in Greece.

A rondo was often chosen by composers in the classical period for the last movement of a sonata (or symphony or concerto, for that matter). In rondo form there is a principal theme that alternates with a contrasting theme(s). So, the original theme anchors the whole piece in between secondary digressions.

At first glance, “Peggy” appears to be an unlikely nickname for “Margaret”. “Peg” and “Peggy” actually come from “Meggy”, which is a diminutive form of “Margaret”.

“Near beer” is a slang term describing a malt liquor that doesn’t contain enough alcohol to be labelled as “beer”. An example would be “O’Doul’s”, a beverage that I tend to consume in a glass full of ice when I am the designated driver.

43 Two-run homer situation : ONE ON

The Care Bears franchise includes a line of toys as well as TV shows and movies. The original Care Bears were characters created for greeting cards marketed by American Greetings starting in 1981.

Scots is a variant of English that is commonly spoken in Lowland Scotland. Scots is very different from Scottish Gaelic, a variant of the Celtic language that is more likely to be encountered in the Scottish Highlands. Much of the work of poet Robert Burns was written in Scots.

A private eye is a private investigator, a PI.

A shock jock is a radio personality who uses humor that is likely to offend much of the audience, and/or who expresses exaggerated opinions designed to generate a heated reaction. The list of broadcasters who have been labelled “shock jocks” includes Howard Stern, Opie and Anthony, and Don Imus. Not a fan …

The thread count of a textile is the number of threads counted along two perpendicular sides of a square inch of material. The lower the thread count, the more coarse is the fabric. Experts tell us that thread counts greater that about 400 are really a marketing ploy to get us to pay more for our bed linens.

2 Company whose failure brought down an accounting firm : ENRON

“Heidi” is a children’s book written by Swiss author Johanna Spyri and published in two parts. The first is “Heidi’s years of learning and travel”, and the second “Heidi makes use of what she has learned”. The books tells the story of a young girl in the care of her grandfather in the Swiss Alps. The most famous film adaptation of the story is the 1937 movie of the same name starring Shirley Temple in the title role.

In a boat, a thole is a wooden peg or pin that acts as a fulcrum for an oar that it is used in rowing. The thole is inserted into a hole in the gunwale, the top edge of the side of the boat.

Crescendo (cresc.) is an Italian word meaning “gradually becoming louder”, and is often seen on a musical score. The term with the opposite meaning is “diminuendo” (dim.).

Eucalyptus is a genus of flowering trees and shrubs that is particularly widespread in Australia. The species known as mountain ash or swamp gum is the tallest flowering plant in the world, with the tallest example located in Tasmania and standing at over 325 feet tall.