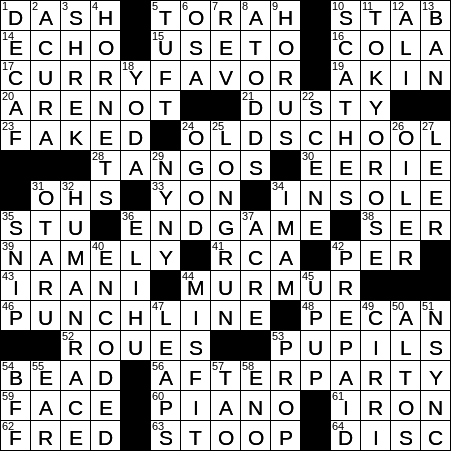 Themed answers each comprise two words, the second of which is often seen AFTER PARTY:

To curry is to seek, at least when it is used in the phrase “to curry favor”.

William Shakespeare’s “Romeo and Juliet” doesn’t end well for the title characters. Juliet takes a potion as a ruse to fool her parents, to trick them into thinking she is dead. The potion puts her in a death-like coma for 24 hours, after which Juliet plans to awaken and run off with Romeo. Juliet’s sends a message to Romeo apprising him of the plan, but the message fails to arrive. Romeo hears of Juliet’s “death”, and grief-stricken he takes his own life by drinking poison. Juliet awakens from the coma, only to find her lover dead beside her. She picks up a dagger and commits suicide. And nobody lives happily ever after …

“Roue” is a lovely word, I think, but one used to describe a less than lovely man, someone of loose morals. “Roue” comes from the French word “rouer” meaning “to break on a wheel”. This describes the ancient form of capital punishment where a poor soul was lashed to a wheel and then beaten to death with cudgels and bars. I guess the suggestion is that a roue, with his loose morals, deserves such a punishment.

1 Brew for an early night : DECAF

The Hornets are the NBA team based in Charlotte, North Carolina. The Hornets were established as an expansion team in Charlotte in 1988, but moved and became the New Orleans Hornets in 2002. The NBA returned to North Carolina in 2004 with the establishment of the Charlotte Bobcats. The New Orleans franchise rebranded itself in 2013, becoming the Pelicans. As a result, the Charlotte Bobcats were able to change their name to the Hornets in 2014.

“Tokyo Rose” was the nickname given to several English-speaking female propaganda broadcasters who supported the Japanese cause during WWII. The person most associated with “Tokyo Rose” was Iva Toguri D’Aquino, an American citizen from Los Angeles who earned a degree in zoology from the University of California. Toguri travelled to Japan in mid-1941, and got stranded there after the attack on Pearl Harbor. She responded to pressure from coerced Allied service members to help them with their propaganda broadcasts, providing a female voice. According to many accounts, Toguri did her work unwillingly and did what she could to provide support to the prisoners-of-war. After the war she was arrested and spent a year in jail before being released due to lack of evidence of wrongdoing. She was then transported to the US, where she stood trial on eight counts of treason. After a long and expensive trial she was found guilty on one count and served over six years in prison. In 1977, President Gerald Ford granted her a full and unconditional pardon.

Park Avenue in New York City used to be known as Fourth Avenue, and for much of its length carried the tracks of the New York and Harlem Railroad. When the line was built, some of it was constructed by cutting through the length of the street and then forming underground tunnels by covering over the line with grates and greenery. This greenery formed a parkland between 34th and 40th Streets, and in 1860 the grassy section of Fourth Avenue was renamed Park Avenue, a name that was eventually used for the whole thoroughfare.

The Japanese city and port of Otaru is just a 25-minute drive northwest from Sapporo. Just like Sapporo, Otaru has a famous beer that shares the city’s name.

“This I Promise You” was a hit for boy band NSYNC in 2000. The group recorded a version of the song in Spanish at the same time, “Yo te Voy a Amar”, and released it in Spanish-speaking countries all over the world.

In the world of IMs (instant messages), a BFF (best friend forever) is a VIP (very important person).