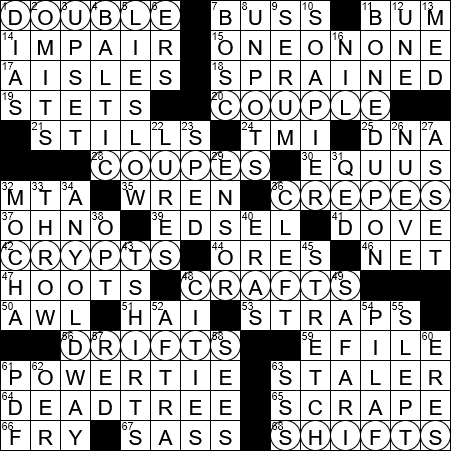 Themed answers form a word ladder from DOUBLE to SHIFTS. This particular word ladder uses a DOUBLE SHIFT of letters, changes two letters at a time:

“Equus” is a play written in 1973 by Peter Shaffer. Shaffer wrote the play after he heard about a real-life crime in which a 17-year-old youth blinded six horses. The play tells of a psychiatrist treating a young man who has an unhealthy fascination with horses.

41 Personal care brand with a bird in its logo : DOVE

Much of an owl’s diet consists of small mammals. As a result, humans have used owls for centuries to control rodent populations, usually by placing a nest box for owls on a property. Despite the the fact that owls and humans live together in relative harmony, owls have been known to attack humans from time to time. Celebrated English bird photographer Eric Hosking lost an eye when attacked by a tawny owl that he was trying to photograph. Hosking wrote an 1970 autobiography with the wry title “An Eye for a Bird”.

The word “yes” translates in to “oui” in French, “ja” in German, and into “hai” in Japanese.

64 Like the print version of an e-book, say : DEAD-TREE

The hard-copy version of say a book is sometimes referred to the “dead-tree” version.

68 Work assignments … and, preceded by 1-Across, the key to creating the word ladder (and part 8 of it) : SHIFTS

In a three-shift working system, the shifts are known by various names:

Antivenom (also “antivenin”) is made by extracting venom from say a snake (so called “milking”) and then diluting it and injecting it into a host animal (like a cat, horse or sheep). The animal undergoes an immune response and produces antibodies to neutralize the poison. The antibodies are harvested from the animal’s blood and are stored for use with victims who are bitten by the same snake, or by some other creature that injects the same or a similar venom. I guess antivenom might also be called antiserum …

11 Took a refresher course in : BONED UP ON

In Spanish, there are “nueve” (nine) players on a “béisbol” (baseball) team.

James Ensor was a Belgian painter active in the first half of the twentieth century. He lived in Ostend for almost all of his life. In fact, he only made three brief trips abroad, to Paris, London and Holland.

Mocha is a port city in Yemen on the Red Sea and was once the principal port for the capital city of Sana’a. Mocha was the major marketplace in the world for coffee until the 1600s, and gave its name to the Mocha coffee bean, which in turn gave its name to the mocha brown color, and to the flavor of coffee infused with chocolate.

Chicago, Illinois is the US’s third most populous city, after New York and Los Angeles. It is also home to O’Hare airport, the busiest airport in the whole world (in terms of takeoffs and landings). Chicago takes its name from the Chicago River, which in turn takes its name from the Native American word “shikaakwa” that translates as “wild onion” or “wild garlic”. Early French explorers chose this name as they found dense growths of wild garlic along the banks of the river.

“Green Hills of Africa” is a nonfiction book by Ernest Hemingway. In the book, Hemingway recounts his travels with his wife on a month-long safari in East Africa.