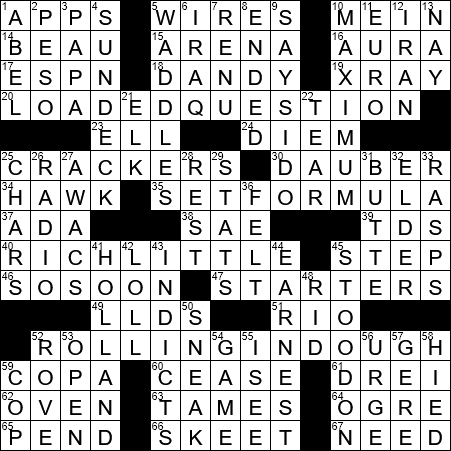 Themed answers start with a synonym of “ROLLING IN DOUGH”:

5. Array around a surge protector : WIRES

A surge protector is an appliance that protects electrical devices from damaging voltage spikes. Surge protectors often take the form of power strips.

The actor Beau Bridges is the son of actor Lloyd Bridges, and brother of actor Jeff Bridges. Beau’s best-known role is perhaps one of “The Fabulous Bakker Boys” alongside brother Jeff.

Mud daubers are types of wasps that build their nests from mud. Mud daubers are relatively nonaggressive and rarely use their stings. However, they have been linked to several aircraft crashes. Mud daubers are suspected to have built nests within the pitot tubes of the doomed airplanes. Blocked pitot tubes cause a plane’s airspeed to be measured incorrectly.

“Fluctuate” is another favorite word of mine. Meaning “to shift back and forth”, the verb comes from “fluctus”, the Latin word for “wave”. In turn, “fluctus” comes from the Latin verb “fluere” meaning “to flow”.

American Dental Association (ADA)
Dental floss has been around a long time, with the term “dental floss” being introduced in the early 1800s. Anyone fond of the writings of James Joyce (that wouldn’t be me!) might recall a character using dental floss in his famous novel “Ulysses” that was published between 1918 and 1920.

An SAE is a “stamped, addressed envelope”. An SASE is a “self-addressed, stamped envelope”.
The term “free lance” was coined by Sir Walter Scott in his 1820 novel “Ivanhoe”, when he used it to describe a medieval mercenary warrior. Forty years later, a “freelancer” was a journalist who did work for more than one publication without a long-term commitment.

40. Impressionist once labeled “The Man of a Thousand Voices” : RICH LITTLE

Rich Little is a Canadian-born impersonator known as “The Man of a Thousand Voices”. Little lives in Las Vegas, and there was sworn in as a US citizen just a few years ago, in 2010. I saw Little perform in Vegas not that long ago, and really enjoyed the experience. I felt a little sorry for the younger folks in the audience though, who were scratching their heads at impersonations of Jimmy Stewart, George Burns, Jack Benny, James Mason and the likes.

Ipanema is a beach community in the south of Rio de Janeiro in Brazil. The name Ipanema is a local word meaning “bad water”, signifying that the shore is bad for fishing. The beach became famous on release of the song “The Girl from Ipanema” written in 1965.

Her name was Lola, she was a showgirl
With yellow feathers in her hair and a dress cut down to there
She would merengue and do the cha-cha
And while she tried to be a star
Tony always tended bar
Across the crowded floor, they worked from 8 ‘til 4
They were young and they had each other
Who could ask for more?

Cuba is the only country in the world that has two official currencies. The Cuban peso (CUP) is referred to as the “national currency”. Government workers are paid in CUPs, and CUPs can be used to pay for government-provided services and price-controlled items such as fruit and vegetables. There is also the Cuban convertible peso (CUC) that was introduced in 1994, when its value was pegged to the US dollar. Most products available in stores are imported, and have to be purchased with CUCs. Cubans with access to CUCs, like hotel workers interfacing with tourists, they tend to have better lifestyles than government workers in general.

Euro coins are issued by all the participating European states. The reverse side is a common design used by all countries, whereas the obverse is a design specific to each nation. For example, the one euro coin issued by Malta features the Maltese Cross. That Maltese euro is legal tender right across the eurozone. The Irish euro features a harp.
The island state of Malta is relatively small (122 square miles), but its large number of inhabitants makes it one of the most densely populated countries in Europe. Malta’s strategic location has made it a prized possession for the conquering empires of the world. Most recently it was part of the British Empire and was an important fleet headquarters. Malta played a crucial role for the Allies during WWII as it was located very close to the Axis shipping lanes in the Mediterranean. The Siege of Malta lasted from 1940 to 1942, a prolonged attack by the Italians and Germans on the RAF and Royal Navy, and the people of Malta. When the siege was lifted, King George VI awarded the George Cross to the people of Malta collectively in recognition of their heroism and devotion to the Allied cause. The George Cross can still be seen on the Maltese flag, even though Britain granted Malta independence in 1964.

The Benevolent and Protective Order of Elks (BPOE) was founded in 1868, and is a social club that has about a million members today. It started out as a group of men getting together in a “club” in order to get around the legal opening hours of taverns in New York City. The club took on a new role as it started to look out for poor families of members who passed away. The club now accepts African Americans as members (since the seventies) and women (since the nineties), but atheists still aren’t welcome.

When the British developed radar in WWII, they also came up with an airborne system that they actually deployed during the war. In 1944 the US Navy commissioned a similar system, and so launched the first American Airborne Early Warning (AEW) system, also before the war was over. The more modern term for the technology is Airborne Warning and Control System, or AWACS for short.

That would be baseball: earned run average (ERA), and run batted in (RBI)

“Stetson” is a brand name of hat, manufactured by the John B. Stetson Company of St. Joseph, Missouri. The so called “cowboy hat” that Stetson pioneered was such a success that the company became the largest hat maker in the world, producing over 3.3 million hats per year.

Some Dutch people can get a little annoyed if one refers to their country as “Holland”, as the correct name is “the Netherlands”. North and South Holland are two of the country’s twelve provinces. The use of “Holland” instead of “the Netherlands” is analogous to the former Soviet Union being referred to as “Russia” and the United Kingdom being called “England”. That said, sometimes even the Dutch people themselves refer to the country as Holland, especially at a soccer match!