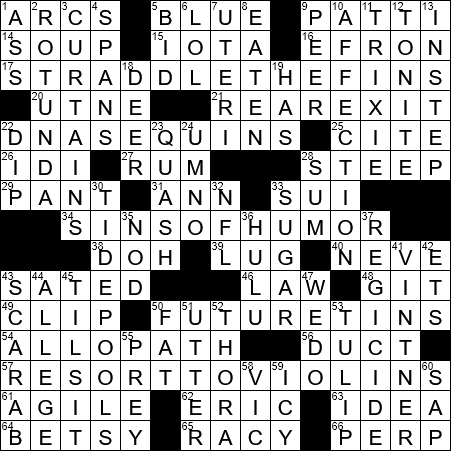 Themed answers sound like common phrases. An “ense” sound has been changed to the similar-sounding “-ins” sound:

We use the term “compass” to describe both a drawing tool/mathematical instrument, and a mariner’s directional tool. The name was applied first to the drawing tool, back in the 1300s. The usage extended to the navigational tool a century later. That extension of usage is probably because a directional compass is circular and has a needle or point, and so resembles the mathematical instrument.

“Rhapsody in Blue” is one of the most popular works by the great George Gershwin. The piece has a famous clarinet glissando at its opening, but is a work for solo piano and orchestra. Gershwin himself played the piano at its premiere in 1924. We can’t be certain how that original “Rhapsody” sounded as Gershwin improvised some of what he was playing, and didn’t write out the piano part until after the first performance.

Patti Davis nee Reagan is the daughter of President Ronald Reagan and his second wife Nancy Davis Reagan. Patti opted to use her mother’s name in order to develop her career, independent of her father’s political success. Indeed, Patti caused some conflict within her family by very publicly adopting political positions that differed from her father’s. She caused further conflict when she posed nude for “Playboy” in 1994.

Zac Efron is an actor from San Luis Obispo, California. Apparently Efron is a heartthrob to “tweenyboppers”. His big break was in the Disney hit movie “High School Musical”.

“Baywatch” is a 2017 comedy film that is based on the TV series of the same name that famously starred David Hasselhoff. The movie stars Dwayne “the Rock” Johnson.

17. Instruction for dolphin riders? : STRADDLE THE FINS (sounds like “straddle the fence”)

Nucleobases are molecules that form the backbone of DNA and RNA chains. It is the sequence of these bases in the DNA chain that makes up the so-called “genetic code”. In DNA, the four bases are adenine (A), guanine (G), thymine (T) and cytosine (C). The same bases are found in RNA, except that thymine is replaced by uracil (U). In DNA, the nucleobases exist in “base pairs”.

A lug nut is a nut on which one side is tapered. Lug nuts are used to secure wheels to a vehicle.

Neve Campbell is a Canadian actress whose big break in movies came with the “Scream” horror film series, in which she had a leading role. I don’t do horror films, so I haven’t seen any of the “Scream” movies. Nor have I seen the TV series “Party of Five” which launched the acting careers of both Campbell and Jennifer Love Hewitt in the nineties.

Some proponents of alternative medicine use the word “allopathy” to refer to traditional medicine. The term was probably absorbed from German, in which language “allopathisch” was coined by homeopath Samuel Hahnemann in 1810. The prefix “allo-” usually translates as “other”, from the Greek “allos” meaning ‘different, other”.

64. Pioneer of song who “crossed the wide mountains with her lover Ike” : BETSY

“Sweet Betsy from Pike” is an American ballad that dates back to the California Gold Rush. It tells of “Sweet Betsy” and her lover “Ike” who move from Pike County (probably in Missouri) to California. It has been suggested that early versions of the song actually refer to Ike’s rifle, as “Betsy” was a nickname for a rifle back then.

In architecture, “rotunda” is a name given to a building with a circular ground plan. Often the building has a dome, but that isn’t a strict requirement for a “rotunda”. The term can also refer to a round room within a building. The most famous example in this country is the Rotunda in the US Capitol building in Washington, D.C.

Apparently, the text-speak “LOLZ” is the plural form of LOL (laugh out loud).

Marsupials are mammals that carry their young in a pouch. Better-known marsupials are kangaroos, koalas, wombats and Tasmanian devils. As you can perhaps tell from this list, most marsupials are native to the Southern Hemisphere.

Hulu is a video on demand service. Although competing directly with Netflix and Amazon Prime, Hulu’s primary focus is the streaming of television shows rather than movies.

Regicide is the crime of assassinating a monarch. The term comes from the Latin “rex” (genitive “regis”) meaning “king”.

A vintner is a person selling or making wine. The term comes from “vinum”, which is Latin for “wine”.

43. Many a hieroglyphic insect : SCARAB

Tilsit cheese was created in the mid-1800s by Prussian-Swiss settlers around the town of Tilsit in former East Prussia. Tilsit is now the city of Sovetsk in Russia.

The Crown Victoria is full-sized sedan car that was manufactured by Ford from 1991 to 2011. One of the most famous versions of the Crown Vic is the Police Interceptor that Ford introduced in 1998.

“Sap” is slang for a fool, someone easily scammed. The term arose in the early 1800s in Britain, when it was short for in “saphead” and “sapskull”.