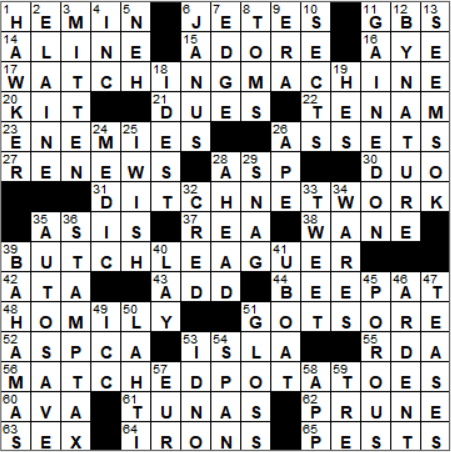 Today’s Theme (according to Bill): Catch Prize for Solving?

George Bernard Shaw (GBS) was a very successful Irish playwright. Shaw is the only person to have been awarded both a Nobel Prize for Literature, and an Oscar. He won his Oscar for adapting his own play “Pygmalion” for the 1938 film of the same name starring Leslie Howard and Wendy Hiller. Most people are more likely to have seen the musical adaptation of “Pygmalion” that goes by the title “My Fair Lady”.

“Major Barbara” is a 1905 play by Irish author George Bernard Shaw. The title character is Barbara Undershaft, a major in the Salvation Army who spends a great deal of her time helping the poor. Barbara takes offense when her father donates money to the Salvation Army, money that he earned selling munitions.

“Us Weekly” is a celebrity gossip magazine that was first published in 1977 as “Us”. Originally issued every two weeks, “Us” became a monthly magazine in 1991, and moved to a weekly format in 2000.

Dish Network was the brand name used by is a satellite communication company EchoStar for it consumer-oriented service. EchoStar spun off Dish Network as a separate entity in 2008, although the two independent companies continue to work closely together.

The Old West train and bank robber Robert Parker was better known by the name Butch Cassidy. His partner in crime Harry Longabaugh was known as the Sundance Kid. Famously, the exploits of Butch and Sundance were reenacted in the marvelous 1969 film “Butch Cassidy and the Sundance Kid”.

William Shakespeare features a character named “Portia” in two of his plays. The most famous is Portia, the heroine of “The Merchant of Venice”. The lesser known is Portia, the wife of Brutus in “Julius Caesar”.

Here are some lines spoken by Portia to her husband Brutus, in William Shakespeare’s play “Julius Caesar”:

“Caddie” is a Scottish word, as one might expect given the history of the game of golf. “Caddie” is a local word derived from the French “cadet”, meaning a younger son or brother, and also a student officer in the military.

Elaine May is a film director, screenwriter and comedian who is best known for the comedy double act she had in the late fifties with Mike Nichols. Nichols and May routines were hilarious sketches or skits, sometimes with substantial amounts of improvisation. The comedy team split up after only four years in 1961, when they were at the pinnacle of their fame. May went into film directing, with mixed success. May wrote and directed “Ishtar” in 1987 starring Warren Beatty and Dustin Hoffman. “Ishtar” is often cited as the epitome of a box office failure. May never directed another film, but continued writing. She wrote the script adaptation for the wonderful 1996 film “The Birdcage”.

“Primary Colors” is a 1998 film that is based on then Governor Bill Clinton’s first presidential campaign. The movie is based on a book by Joe Klein, a journalist who covered the Clinton campaign for the magazine “Newsweek”. The Bill Clinton-like character is named Governor Jack Stanton, and is played by John Travolta. Emma Thompson plays Jack Stanton’s wife Susan. I haven’t seen this one, but I think I’d like to …

In the Hebrew Bible, the Book of Ezra was originally combined with the Book of Nehemiah, with the two being separated in the early days of the Christian Era.

Janus was a Roman god usually depicted with two heads, one looking to the past and the other to the future. As such, as a god Janus is often associated with time. The Romans named the month of Ianuarius (our “January”) after Janus.

Dian Fossey carried out her famous study of gorilla populations in the mountain forests of Rwanda. Sadly, Fossey was found dead in her cabin in Rwanda in 1986, murdered in her bedroom, her skull split open by a machete. The crime was never solved.

Autosave: a setting that I definitely use when writing up these posts …

A “stamp act” is a law requiring that taxes be paid when certain documents are “stamped” to make them legal. Such taxes are known as “stamp duty”. The infamous Stamp Act of 1765 was a tax imposed by Britain on the American colonies. The colonies famously rejected the Act declaring “No Taxation without Representation”, and the disagreement became a significant factor in the decision to declare independence.

The Bahamas is a group of islands in the Atlantic Ocean, lying in the same island chain as Cuba and Hispaniola. The Bahamas was a British colony for many years but became independent in 1973, although it retains membership in the British Commonwealth.

Lay’s potato chips were introduced in 1938 by Herman W. Lay. Lay started selling his chips out the trunk of his car, travelling all over the US. In those days the chips were pretty much handmade, but Lay put an end to that in 1942. He invented the first continuous potato processor in 1948, and chips started to take over the world!

In the sport of cricket, the two sets of stumps at either end of the pitch are known as wickets. Bowlers try to bowl the ball into the wicket, which the batsmens defend.

Christine Lahti is an actress probably best known for playing Dr. Kate Austen on the TV medical drama “Chicago Hope”. If you read “The Huffington Post” you might run across her as well, as Lahti is a contributing blogger.

“Chicago Hope” is a medical drama TV show that originally ran from 1994 to 2000. The title refers to a fictional private charity hospital in the Windy City, where the show is set.

The Old English term “scrift” was used to describe confession to a priest followed by penance and absolution. The term “short shrift” developed from “scrift”, and was a brief period given to a condemned criminal to confess his sins before execution. We now use “short shrift” to mean “little or no consideration”.

The North Atlantic Treaty Organization (NATO) is an international military alliance that was established in 1949. NATO headquarters was initially set up in London, moved to Paris and in 1952, and then to Brussels 1967.