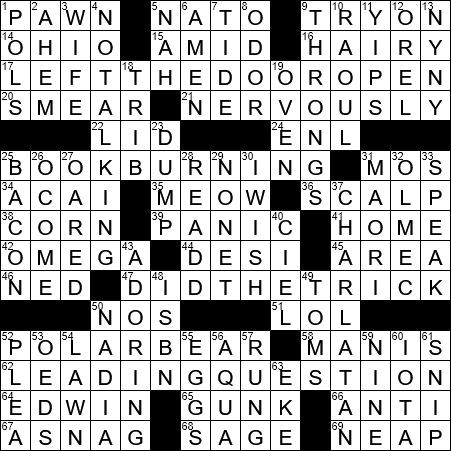 Themed answers end with a word that is often seen LEADING the word QUESTION:

“Fahrenheit 451” is a 1953 novel by Ray Bradbury that tells the story of a future American society that discourages reading of books. The main character’s job is that of a “fireman”, someone responsible for burning books. The title was chosen to supposedly represent the temperature at which book paper will burn, although whether that temperature is accurate or not seems to be up for debate.

Scalping of tickets, selling them above retail price for an excessive profit, originated in the mid-1800s with scalpers making money off theater tickets. There was also quite a bit of money made by people scalping railway tickets. Railroads gave discounts on tickets for longer journeys, so someone trying to get from San Francisco to Chicago say, might buy a ticket to New York. Once in Chicago the passenger would scalp the remainder of his/her ticket to someone wanting to get to New York, and make his or her invested money back with a bonus. The exact etymology of the term “scalper” seems unclear.

To find this website’s home page, just click on the LAXCrossword.com title at the top of each page.

“Gunk” is a thick greasy substance. The original “Gunk” was a brand of thick liquid soap that was patented in 1932.

6. Confirmation from the congregation : AMEN

8. Reason for a diaper change : ODOR

In Gaston Leroux’s novel “The Phantom of the Opera”, the young Christine Daaé is obsessively admired by Erik, the “phantom” who lives below the Paris Opera House. Christine is also pursued by her childhood friend Raoul, Viscount de Chagny.

The Olmec were an ancient civilization that lived in the lowlands of south-central Mexico from about 1500 BC to about 400 BC.

A charlatan is someone who makes false claims of skill or knowledge. “Charlatan” is a word we imported from French, although the original derivation is the Italian “ciarlatano”, the term for “a quack”.

The Oxford English Dictionary (OED) is a great source for a synonym (syn.) or an etymology (etym.) of any particular word.