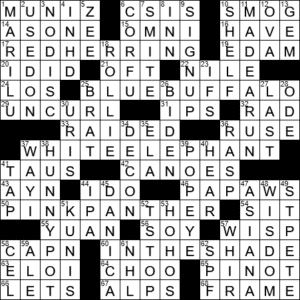 Today’s Reveal Answer: In the Shade

1 Frankie who played Malcolm in “Malcolm in the Middle” : MUNIZ

I’ve never actually sat down and watched the TV comedy “Malcolm in the Middle”. It ran on Fox from 2000 to 2006. Malcolm was played by Frankie Muniz, who gave up acting to pursue a career in motor racing.

The “CSI” franchise of TV shows has been tremendously successful, but has finally wound down. “CSI: Miami” (the “worst” of the franchise, I think) was cancelled in 2012 after ten seasons. “CSI: NY” (the “best” of the franchise) was cancelled in 2013 after nine seasons. The original “CSI: Crime Scene Investigation” was set in Las Vegas, and hung in there until 2015 when it ended with a two-hour TV movie. The youngest show in the series was “CSI: Cyber”. It lasted for two seasons, before being canceled in 2016.

The exact origin of the term “red herring”, meaning “something that misleads”, isn’t known. The most common explanation for the use of the phrase is that kippers (strong-smelling smoked herrings) were used by fugitives to distract bloodhounds who were on their trail. Kippers become red-colored during the smoking process, and are no longer “white herrings”.

Blue Buffalo is a company that makes cat and dog food. Founder Bill Bishop named the company for his pet Airedale Terrier “Blue”.

An Internet Protocol (IP) address is a numerical label assigned to every device on a computer network. The device that you’re using to read this blog post on has been assigned a unique IP address, as has the computer that I’m using to make this post …

We use the idiomatic term “white elephant” to describe an object or venture that costs more to maintain than can be gained by disposing of it. The term comes from the tradition of presenting a white, albino elephant to a Southeast Asian monarch. Such a beast was a blessing, in that it was viewed as sacred and a sign of great power. It was also a curse, in that the animal was of no practical use and was expensive to maintain. The derivative phrase “white elephant gift exchange” refers to a party game in which impractical gag gifts are exchanged, usually at Christmas.

“We the Living” is the first novel by the author Ayn Rand, and was published in 1936. According to the author, the storyline is somewhat autobiographical, and reflects Rand’s early life in post-revolutionary Russia.

As an actress, Marilu Henner’s most celebrated role was as Elaine O’Connor Nardo on “Taxi”. Henner has a condition called a Superior Autobiographical Memory. This means that she can recall information and events that took place on every day of her life, starting from a very early age.

“Taxi” is a sitcom that aired in the late seventies and early eighties. “Taxi” was the big break for a host of great comic actors including Judd Hirsch, Jeff Conaway, Danny DeVito, Marilu Henner, Tony Danza, Christopher Lloyd and Andy Kaufman.

The Ionian Sea is that part of the Mediterranean lying between Greece and the southern part of Italy (under the sole of the “boot”). The Ionian Sea is one of the most seismically active regions on the planet.

Rollie Fingers is a former MLB relief pitcher, only the second relief pitcher to be elected to the National Baseball Hall of Fame. Fingers is noted for his waxed handlebar moustache. He originally grew it along with other players to get a bonus payment while playing for the Oakland Athletics, but he still sports it to this day.

“Trinity” is a 1976 novel by American author Leon Uris. The story is set in Ireland, with a storyline that runs from the Great Famine of the 1840s through the Easter Rising of 1916.

38 Pooh’s pride, as Pooh would spell it : HUNNY POT

Danica Patrick is a very successful, retired auto racing driver. She won the 2008 Indy Japan 300, making her the only woman to win an IndyCar Series race. Patrick also finished third in the 2009 Indy 500, the highest finish for a woman in that race.

Asiana is the second-largest airline in South Korea, behind Korean Air. It was founded in 1988, and as a result ended the monopoly that had been enjoyed by Korean Air.

Ho Hos snack cakes were first produced in San Francisco in 1967. The “Happy Ho Ho” mascot was created for the brand in the 1970s, and was a cartoon character in a Robin Hood outfit. Ho Hos weren’t the best thing to come out of the sixties I’d say …

61 Org. with Sharks and Predators : NHL

The Predators are the National Hockey League team based in Nashville, Tennessee.