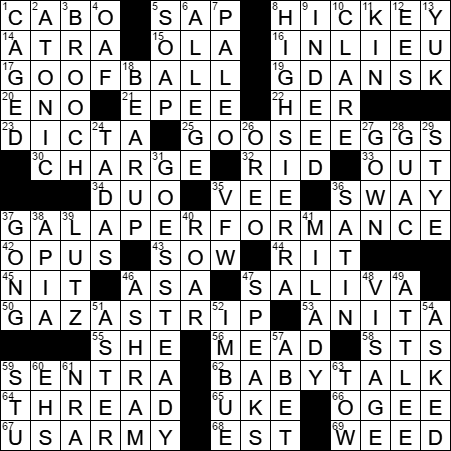 By taking the first syllable from each of today’s themed answers we come up the “infantile vocalization” GOO GOO GA GA:

The slang term “hickey” is used for a red mark left on the skin after a passionate kiss.

The term “necking” applies to kissing and caressing. I like what Groucho Marx had to say on the subject: “Whoever named it necking was a poor judge of anatomy.”

Fortunately for crossword constructors, the Atra razor was introduced by Gillette in 1977. The Atra was sold as the Contour in some markets and its derivative products are still around today.

“Payola” is the illegal practice of paying radio stations or disk jockeys to repeatedly play a particular piece of music.

Gdańsk is a port city on the Baltic coast of Poland and is the country’s biggest seaport. Gdańsk was where the European Solidarity movement was born, with Lech Wałęsa in the leadership position. Wałęsa was an electrician working in the Gdańsk shipyards.

“Hannah and Her Sisters” is a 1986 comedy-drama film that was written and directed by Woody Allen. Hannah is played by Mia Farrow, and Hannah’s two sisters are played by Barbara Hershey and Dianne Wiest.

The Judds were a country music singing duo made up of Naomi Judd and her daughter Wynonna.

Apparently, geese fly in a V-formation for a couple of reasons. One is that it makes for efficient flight and conserves energy. The leading bird gets no advantage, but every following bird gets to “slipstream” a little. It has been noted that the lead bird drops to the back of the formation when he/she gets fatigued. It’s also thought that the flock can stick together more easily when in formation, so it is more difficult to lose someone along the way.

Rit. (or sometimes ritard.) is the abbreviation for ritardando, a musical direction to slow down the tempo.

A “spitball” is an illegal pitch in baseball in which saliva, petroleum jelly or some other material has been applied to one side of the ball. The foreign substance makes a subtle change to the wind resistance and weight of that side of the ball, causing it to move atypically during a pitch.

After the 1948 Arab-Israeli War, the boundaries of the strip of land on the Mediterranean around Gaza were fixed in the Israel-Egypt Armistice Agreement. The boundaries were specifically defined but were not to be recognized as an international border. From 1948, the Gaza Strip was occupied and administered by Egypt, until 1967 when Israel took over occupation following the Six-Day War. In 1993, Israel and the PLO signed the Oslo Accords which handed over administration to the Palestinian Authority, but with Israel retaining control of the Gaza Strip’s airspace, some land borders and its territorial waters. The intent was to further this agreement, but discussions between the parties broke down. Israel withdrew from Gaza in 2005.

No one seems to be very certain of the origin of the phrase “that’s all she wrote”. One popular story though is that it stems from the unfortunate “Dear John” letters that some soldiers received during WWII.

Mead is a lovely drink, made from fermented honey and water.

Fort Bragg in North Carolina is a very large Army installation that covers over 250 square miles. The base is named for General Braxton Bragg, the native North Carolinian who commanded the Confederate Army forces during the Civil War.

The name “dandelion” comes from the French “dent de lion” meaning “lion’s tooth”. The name is a reference to the coarse, tooth-like edges of a dandelion’s leaves.

High Sierra is a 1941 movie based on a novel by W.R. Burnett. It’s a gangster piece, starring Humphrey Bogart as “Mad Dog” Roy Earle, a bad guy with a heart. Bogie’s love interest is played by the very talented Ida Lupino.

One of my favorite counties in Ireland is Clare, home of the Burren, a beautiful, desolate landscape, as well as the world-famous Cliffs of Moher that greet the Atlantic Ocean.

The Veterans of Foreign Wars organization (VFW) is the largest association in the country of US combat veterans.

Apia is the capital city, and in fact the only city, of the Pacific island-nation of Samoa. The harbor of Apia is famous for a very foolish incident in 1889 involving seven naval vessels from Germany, the US and Britain. A typhoon was approaching so the safest thing to do was to head for open water away from land, but no nation would move its ships for fear of losing face in front of the others. Six of the ships were lost in the typhoon as a result and 200 American and German sailors perished. The British cruiser HMS Calliope barely managed to escape from the harbor and rode out the storm safely. Apia is also known as the home of writer Robert Louis Stevenson, for the last four years of his life.

“Ashram” is a Hindu term that traditionally describes a place of spiritual retreat, one that is typically located in a remote location conducive to spiritual instruction and meditation.

Stu Erwin played the title role of Joe Palooka in the 1934 movie “Palooka”, but the film’s star was the great Jimmy Durante. In fact, the movie was released in the UK as “The Great Schnozzle”.

2. Not accented, as syllables : ATONIC

41. Address for a noblewoman : MILADY