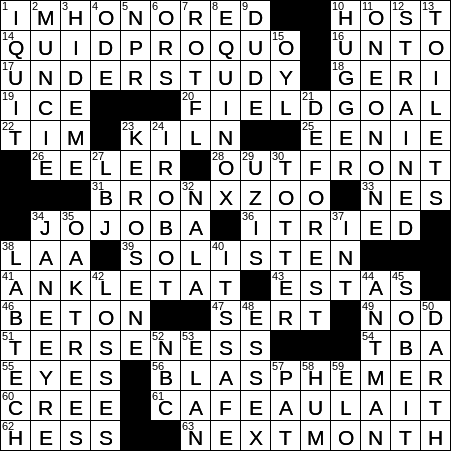 14. Literally, “something for something” : QUID PRO QUO

Shakespeare’s play “Henry V” is more correctly called “The Life of Henry the Fifth”. The story mainly focuses on his life before and immediately after the king’s celebrated victory over the French at the Battle of Agincourt. “Henry V” includes one of Shakespeare’s most celebrated speeches, an address by the king to his troops at the siege of Harfleur, with the opening lines:

Tim Kaine took office as US Senator for Virginia in 2013, having served as the state’s governor from 2006 to 2010. He was also chairman of the Democratic National Committee from 2009 until 2011. Famously, Senator Kaine ran as vice presidential running mate in Hillary Clinton’s unsuccessful bid for the presidency in 2016.

“Eenie Meenie” is a 2010 song by Sean Kingston and Justin Bieber. Nope, never heard it …

“Sean Kingston” is the stage name of Jamaican-American singer Kisean Anderson. He was born in Miami, Florida, but spend his first years in Kingston, Jamaica (hence the stage name).

“Duck Hunt” is a video game. Not for me though …

34. Southwestern plant whose oil is used in cosmetics : JOJOBA

Jojoba oil is produced from the seed of the jojoba plant. The oil is used in the cosmetic industry as a replacement for the now banned whale oil. Jojoba oil is also a natural fungicide and is used to control mildew.

The Seattle Mariners (SEA) are one of only two Major League teams never to have appeared in a World Series. The other is the Washington Nationals. The Mariners are owned by the Nintendo Corporation of America, making them one of three Major League teams owned by businesses. The other two are the Atlanta Braves (owned by Liberty Media) and the Toronto Blue Jays (owned by Rogers Communications).

José Maria Sert was a painter of murals from Catalan. He was a good friend of fellow-artist Salvador Dali.

51. Coolidge is famous for it : TERSENESS

President Calvin Coolidge, the only US President to have been born on July 4th, was known as a man of few words. It was while he was serving as Vice-President to in the administration of Warren G. Harding, that Coolidge earned the nickname “Silent Cal”. There is a famous story told about Coolidge’s reticence that I would love to think is true, attributed to the poet Dorothy Parker. Sitting beside him at dinner, she remarked to him, “Mr. Coolidge, I’ve made a bet against a fellow who said it was impossible to get more than two words out of you.” His famous reply: “You lose.”

“Café au lait” (coffee with milk) is usually strong drip coffee to which one adds steamed milk. Well, that’s the way we tend to make in this country.

In the 1920s, two sociologists conducted a study in a “typical Middle-American community” that they dubbed “Middletown, USA”. It turned out that the actual community in the study was Muncie, Indiana.

Ball State University is located in Muncie, Indiana. The school took on the name “Ball” in recognition of the generosity of the Ball Brothers, local industrialists who saved the institution from collapse in 1917 by intervening financially.

“Ask Me Another” is a National Public Radio (NPR) show that features word games, puzzles and trivia. The show is recorded live in front of an audience In New York City, and is hosted by comedian Ophira Eisenberg.

An equinox is a phenomenon dictated by the tilt of the earth’s axis. Twice every year, that tilt “evens out” and the sun is equidistant from points at the same latitude both north and south of the equator. It is as if the earth has no tilt relative to the sun. The term “equinox” comes from the Latin for “equal night”, inferring that night and day are equally long, as the effect of the earth’s “tilt” is nullified. Equinoxes occur each year around March 21st (the vernal equinox) and September 23rd (the autumnal equinox).

Our word “toilet” comes into our vocabulary via a tortuous route from the Middle French “toile” meaning “cloth, net”. The French “toilette” is a diminutive of “toile”, and described a cloth or bag for clothes. From this usage, the English word “toilet” came to mean “fine cloth cover over a dressing table”, and the “the articles used in dressing”. From there, “toilet” described the act of dressing, and then a dressing room. By the early 1800s, a toilet was a dressing room that had a lavatory attached, and eventually the lavatory itself.

Kerosene is a mixture of hydrocarbons that is used mainly as a fuel. Kerosene is volatile, but is less flammable than gasoline. Over in the UK and Ireland, we call the same fuel “paraffin”.

24. 1950 story collection including “The Evitable Conflict” : I, ROBOT

The Voting Rights Act of 1965 was designed to enforce the voting rights guaranteed by the Fourteenth and Fifteenth Amendments of the Constitution. Action was deemed necessary to counter widespread racial discrimination, which was a focus of the Civil Rights movement of the day.

32. One of the original singers of “Can You Feel the Love Tonight” : NALA

“Can You Feel the Love Tonight” is a hit song from the 1994 movie “The Lion King” that was composed by Elton John with lyrics by Tim Rice. The song was performed by voice actors during the film, and Elton John reprised it during the movie credits.

The first work that any of the three Brontë sisters had in print was an 1846 collection of poetry that they published jointly. This first work was titled “Poems by Currer, Ellis, and Acton Bell”, each using a male pen name. Charlotte Brontë published her novel “Jane Eyre” under the name Currer Bell. Emily Brontë followed soon after with “Wuthering Heights” published under the name Ellis Bell. The youngest sister, Anne Brontë, published “Agnes Grey” using the name Acton Bell.

Palpatine is the Dark Lord of the Sith in the “Star Wars” universe. He is also known as “Darth Sidious” and “the Emperor”. In most of the films in the series, Palpatine is played by Scottish actor Ian McDiarmid. In “The Empire Strikes Back”, he was actually played by a woman, the wife of special makeup effects artist Rick Baker, and voiced by New Zealand actor Clive Revill.

“Superstore” is a sitcom that started airing in 2015. It’s all about employees working at a fictional big-box store in St. Louis called Cloud 9.

Pat Summitt was a retired college basketball head coach. She coached the Tennessee Lady Vols team for 38 years starting in 1974. Sadly, Summitt stepped down in 2012 following a diagnosis of early-onset Alzheimer’s disease, and passed away in 2016.