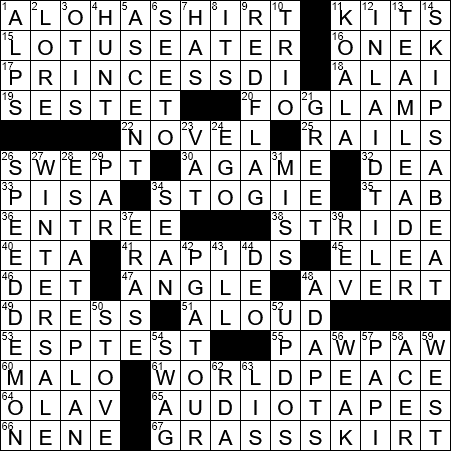 Charles, Prince of Wales married Lady Diana Spencer in 1981 at St. Paul’s Cathedral in London. The wedding was a huge television event, with about 750 million people tuning in worldwide. Although the event was billed as a fairytale wedding, the couple separated in 1992 and divorced in 1996. Famously, Lady Diana died in a car crash in Paris the following year.

A sestet is a group of six lines of poetry. It is similar to a quatrain, a group of four lines.

36 Item on many a diner check : ENTREE

Stride is a jazz piano style that features an “oom-pah” action with the left hand, alternating between a bass note and a chord.

“Columbo” is a police drama that aired from 1971-78, with some more episodes made as recently as 2003. Columbo was played by Peter Falk, although the character of Columbo was first played by Bert Freed in 1960 in an episode of “The Chevy Mystery Show”. That first appearance was so successful that the episode was adapted for the stage in 1962, with Thomas Mitchell taking on the role. Then, the same episode was stretched into a TV movie in 1968, with Peter Falk playing Lt. Columbo for the first time.

Zener cards were developed in the early thirties by psychologist Karl Zener for use in experiments related to extrasensory perception (ESP) that he conducted with his colleague J. B. Rhine. These five simple and distinctive cards replaced the standard deck of cards that had been used in trials up to that point. The five symbols used on the cards are a circle, a cross, three wavy lines, a square and a star.

60 Opposite of bueno : MALO

In Spanish, something might be “bueno” (good) or bad “malo”).

The United Nations was established right after the end of WWII, and was a replacement for the ineffective League of Nations that had been formed after the end of WWI. The US was at the forefront of the founding of the United Nations, led by President Franklin Roosevelt just prior to the start of WWII. The UN’s headquarters is in international territory in New York. There are three regional UN headquarters, also located in international territory, in Geneva, Vienna and Nairobi.

3 Name you might see while listening to Muzak : OTIS

The Beaux Arts Trio was a classical piano trio that was active from 1955 until 2008. Leading the group was Israeli-American pianist Menaheim Pressier.

Chamber music is a style of classical musical that is written for a small group of instruments, as opposed to a full orchestra. That number of players should be able to stage a performance in a “chamber”, traditionally a large room in a palace or other grand residence.

Narcissus was a proud and vain hunter in Greek mythology. He earned himself a fatal punishment, being made fall in love with his own reflection in a pool. So, take was he by his own image, that he could not leave it and wasted away and died by the pool. Narcissus gives us our term “narcissism” meaning “excessive love of oneself”.

26 One flying without a plane? : SPEED DEMON

A speed demon is someone who likes to drive at high speeds, likes to floor it, put the pedal to the metal.

Sean Bean is an English actor who is perhaps best known in North America for playing Boromir in the “Lord of the Rings” trilogy, and Ned Stark in the fantasy TV show “Game of Thrones”. James Bond fans will remember him as the bad guy in “GoldenEye”, the character called Alec Trevelyan.

The FedEx Cup is a championship trophy on the PGA Tour that was first awarded in 2007 (to Tiger Woods). Points are awarded to players throughout the season, and then the top players participate in a series of three playoff events.

That distinctive beehive hairstyle is also called a B-52, because the round, beehive-shape also resembles the bulbous nose of a B-52 bomber! The style originated in 1958, and is credited to Margaret Vinci Heldt, the owner of a hair salon in downtown Chicago. I’m not a fan of the beehive, but I do have to say that Audrey Hepburn carried it off in “Breakfast at Tiffany’s”, as did Dusty Springfield in her heyday.