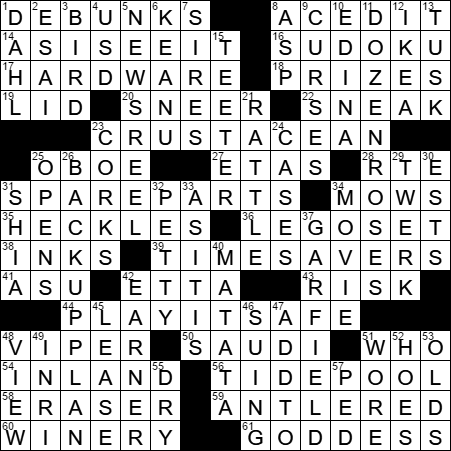 A Latin square is a square-shaped array of symbols in which there is exactly one occurrence of each symbol in each row and in each column. The name “Latin square” comes from the work of Swiss mathematician Leonhard Euler, who authored papers in which he used Latin symbols in the squares.

The motherboard is the main printed circuit board in devices such as portable computers and smartphones. Usually included on the motherboard are essential components such as the central processing unit (CPU, memory chips, and connectors used by peripherals.

Without say looking in a mirror, one can’t see one’s eyeshadow, the makeup used to color the eyelids.

Crustaceans are a subphylum of animals that are quite closely related to insects. Crustaceans all have exoskeletons, and most live in aquatic environments.

27. They get checked at airports, briefly : ETAS

US Route 1 runs from Fort Kent in Maine right down to Key West in Florida.

Originally, the verb “to heckle” meant to question severely, and for many years was associated with the public questioning of parliamentary candidates in Scotland. In more recent times, the meaning has evolved into questioning that is less polite and that is directed at standup comics.

Yakutsk is the capital city of the Sakha Republic in Russia. Yakutsk sits on the Lena River, just south of the Arctic Circle.

The Dodge Viper is an American sports car with a V10 engine. The Viper was introduced in 1991, and is still in production today.

I grew up with the HB method of grading pencils, from “hardness” to “blackness”. Here in the US we sometimes use a numerical grading system, with #2 being the equivalent of HB. The numerical system was introduced in the US by one John Thoreau, father of famed author and hero of mine, Henry David Thoreau.

Venus was the Roman goddess of love and, according to Roman myth, was the mother of the Roman people. Her Greek counterpart was Aphrodite.

“George’s Marvelous Medicine” is a 1981 children’s book by Welsh author Roald Dahl. In the story, 8-year-old George makes magic medicines out of ingredients he finds around his home, including horseradish sauce, gin, anti-freeze and brown paint. Understandably, there is a disclaimer at the beginning of the narrative that states “Warning to Readers: Do not try to make George’s Marvellous Medicine yourselves at home. It could be dangerous.”

11. One or two may arrive on Valentine’s Day : DOZEN ROSES

Mastodons were large mammals that were related to the modern elephant. Mastodons roamed the forest of North and Central America until they became extinct about 10,000 to 11,000 years ago. Their extinction is believed to have come about due to a rapid change in climate.

Twerking is a dancing move in which a woman (usually) shakes her hips up and down causing a lot of “wobbling”. It’s possible that “twerk” is a portmanteau of “twist” and “jerk”. The term may have been coined back in the early 2000s with the song “Whistle While You Twurk” released by the Ying Yang Twins. Twerking became a real phenomenon in 2013 when Miley Cyrus posted a video of herself twerking in a unicorn suit to the 2011 song “Wop” by J. Dash. That video went viral on YouTube, amassing over 4 million views in no time at all.

William Fox founded the Fox Film Corporation in 1915 to produce motion pictures. Fox lost control of his company soon after the Wall Street Crash of 1929. The new owners of Fox merged the company with Twentieth Century Pictures in 1935, forming 20th Century Fox.

“Hakuna Matata” is a Swahili phrase, with a literal translation of “there are no worries”, or more colloquially perhaps, “no problem”. It is a hit song from the musical “The Lion King”.

Back in the day, a wealthy man would “bring home the bacon”, and sit around with guests “chewing the fat”.

8. More than just passed : ACED IT

27. They get checked at airports, briefly : ETAS

7. Parts of some stable relationships : SIRES

11. One or two may arrive on Valentine’s Day : DOZEN ROSES