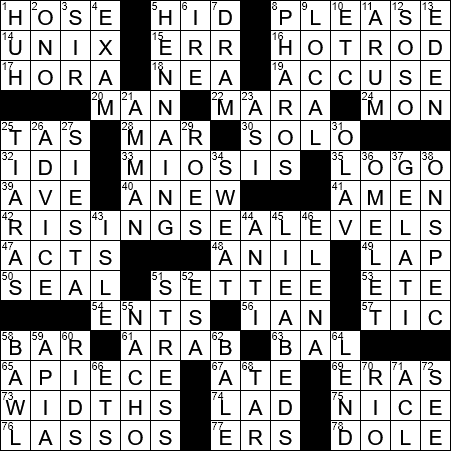 Themed answers are across-answers that come in pairs that spell out the name of a sea. The second element of the pair “RISES” above the LEVEL of the first element, is seen in the grid in the row above the first:

Unix is a computer operating system that was developed at Bell Labs in 1969. The initial name for the project was Uniplexed Information and Computing Service (Unics), and this evolved over time into “Unix”.

The Solomon Sea lies within the Pacific Ocean, between Papua New Guinea and the Solomon Islands. One of the sad facts about the Solomon Sea is that it was the site of many major battles during WWII.

33. Constriction of the eye’s pupil : MIOSIS

An unnatural constriction of the pupil of an eye is called miosis. Unnatural dilation is known as mydriasis.

The logo of Apple, the computer company, is a silhouette of an apple with a bite taken out of it. The company’s original logo featured a picture of Sir Isaac Newton sitting under an apple tree.

“Settee” is another word for “couch”. The term come from the Old English “setl”, which was a long bench with a high back and arms.

In his native Dutch, the explorer William Barents was known as “Willem Barentsz”. Barents made three main voyages of exploration in his lifetime, all of them searching for the Northeast Passage, the route from the Atlantic into the Pacific along the Arctic coast. Barents was not successful in finding the route, but made notable discoveries including Bear Island and Spitsbergen. What is now called the Barents Sea is part of the Arctic Ocean north of Norway and Russia.

The Arabian Sea is an arm of the Indian Ocean that lies off the south coasts of Oman, Yemen, Pakistan and Iran, and is bounded in the west by Somalia, and in the east by India.

The Baltic is a sea in northern Europe that is much less saline than the oceans. The lower amount of salt in the Baltic partially explains why almost half of the sea freezes over during the winter. In fact, the Baltic has been known to completely freeze over several times over the past few centuries.

Those would be shoe widths.

“Woman” is a lovely song written by John Lennon that was recorded in 1980. The song was released in 1981, just a month or so after Lennon was murdered outside his New York apartment building. Lennon wrote the song as an ode to his wife Yoko Ono, and to women in general. He also stated that “Woman” was a grown-up version of “Girl”, a song that he wrote for the Beatles in 1965.

Henna has been used for centuries as a dye, for leather and wool as wells as hair and skin. In modern days, henna is often used for temporary tattoos.

The Lighthouse of Alexandria was one of the Seven Wonders of the Ancient World. Built in the 3rd century BCE, the structure survived for centuries, until finally succumbing to an earthquake in 1323. The lighthouse was built on small island in the Nile Delta called Pharos, and so the lighthouse is sometimes referred to as “Pharos of Alexandria”. It was about 400-450 feet in height, and the light was produced by a furnace at the top of the tower.

The full list of the Seven Wonders of the Ancient World is:

Jack-in-the-pulpit is a perennial plant native to eastern North America. It’s a nasty plant though and contains oxalic acid, a compound that can be very painful if ingested and that can even cause death if taken in sufficient quantities.

38. With no guarantee of payment : ON SPEC

Something that is created on spec is a done so without having a specific buyer or consumer in mind. Many crosswords are constructed on spec, and then submitted to the likes of the “New York Times” or “Los Angeles Times” in the hope of publication.

The dish known as “nachos” was supposedly created by the maître d’ at a restaurant called the Victory Club in the city of Piedras Negras, Coahuila, Mexico. The maître d’’s name was Ignacio “Nacho” Anaya.

Apia is the capital city, and in fact the only city, of the Pacific island-nation of Samoa. The harbor of Apia is famous for a very foolish incident in 1889 involving seven naval vessels from Germany, the US and Britain. A typhoon was approaching so the safest thing to do was to head for open water away from land, but no nation would move its ships for fear of losing face in front of the others. Six of the ships were lost in the typhoon as a result and 200 American and German sailors perished. The British cruiser HMS Calliope barely managed to escape from the harbor and rode out the storm safely. Apia is also known as the home of writer Robert Louis Stevenson, for the last four years of his life.