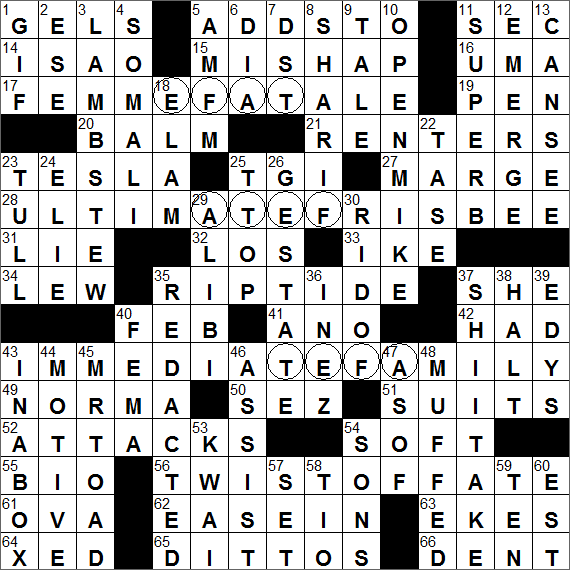 Our themed answers today each contain a string of letters that are circled in the grid. Those letters are FATE, but have been TWISTED about, jumbled up:

Robert Thurman was the first westerner to be ordained a Tibetan Buddhist monk. Robert raised his children in the Tibetan Buddhist tradition and called his daughter “Uma” as it is a phonetic spelling of the Buddhist name “Dbuma”. Uma’s big break in movies came with her starring role in Quentin Tarantino’s 1994 hit “Pulp Fiction”. My favorite Uma Thurman film is the wonderful 1996 romantic comedy “The Truth About Cats and Dogs”.

“Kill Bill” is a 3-part Quentin Tarantino movie (so I haven’t seen it!). “Kill Bill” started off as one film, but as the running time was over four hours, it was split into two “volumes”, released several months apart in 2003 and 2004. There has been a lot of talk about making “Kill Bill: Volume 3”.

Marge Simpson is the matriarch of the family in “The Simpsons” animated sitcom. Marge is voiced by actress Julie Kavner, who is also well known for playing Brenda Morgenstern in the TV show “Rhoda” in the seventies.

Ultimate is a team sport, similar to football or rugby in that the goal is to get a flying disc into an endzone or goal area. The sport used to be called “Ultimate Frisbee”, but the “Frisbee” was dropped as it is a registered trademark.

Mission San Gabriel Arcángel was founded by Spanish Franciscans led by Friar Junipero Serra in 1771. The mission, that continues running to this day, is located about 10 miles from today’s downtown LA. Forty-four settlers left Mission San Gabriel Arcángel in 1781 to found the pueblo named “El Pueblo de Nuestra Señora la Reina de los Ángeles del Río de Porciúncula” (The Town of Our Lady the Queen of the Angels of the Porciúncula River”). It was this pueblo that grew into the city of Los Angeles.

51…Execs, or outfits hanging in their closets..SUITS

In the world of business, “suit” is a slang term describing an executive or manager, often one who is a faceless decision maker.

Mogadishu is a major port city on the west coast of Africa, and is the capital of Somalia. The city is known locally as Xamar.

7…Hrs. that begin when we “spring forward”..DST

Doctor Zhivago is an epic novel by Boris Pasternak, first published in 1957. I haven’t tried to read it the book, but the 1965 film version is a must-see, directed by David Lean and starring Omar Sharif in the title role. The story centers on Yuri Zhivago, a doctor and poet, and how he is affected by the Russian Revolution and the Russian Civil War.

Jack Elam was a movie actor noted for playing the bad guy in Westerns. When Elam was a boy scout, he was accidentally stabbed in the eye with a pencil. The incident left him blind in that eye, and the iris remained skewed to the outside of his face. This gave him a crazed, wide-eyed look that helped add a sense of menace to the characters Elam played.

Jethro Tull is a rock band from the UK, formed in 1967 and still going strong today. The band uses the name of a 18th-century, English agriculturist.

Elie Wiesel was a holocaust survivor, best known for his book “Night” that tells of his experiences in Auschwitz and Buchenwald. Wiesel was awarded the Nobel Peace Prize in 1986.

Our word “redact”, meaning to revise or edit, comes from the past participle of the Latin “redigere” meaning “to reduce”.

Inez and Charlie Foxx were a sister-and-brother R&B duo from Greensboro, North Carolina. The act broke up in the seventies, and Charlie passed away in 1998. The duo’s most famous recording is the song “Mockingbird”, released in 1963.

37…Asian mushroom with an odd spelling..SHIITAKE

Shiitake mushrooms are native to Japan, China and Korea. They are very popular as a food, and shiitake now make up about 25% of the total world’s production of mushrooms. The name is Japanese in origin, and basically means “mushroom that grows on the shii (Castanopsis) tree”.

45…”The Wind in the Willows” croaker..MR TOAD

The Wind in the Willows is a classic children’s novel first published in 1908. Featured in the story are characters such as Mole, Ratty, Mr. Toad and Mr. Badger. The story’s author was Kenneth Grahame, a man who held the exalted position of Secretary of the Bank of England.

The river referred to in the movie (and novel) “The Bridge on the River Kwai” is actually called the Khwae Yai River, and is in western Thailand. The original novel by Pierre Boulle was published in French in 1952, and the wonderful movie released in 1957. Both tell the story of construction of part of the Burma Railway and a bridge over the river, using prisoners of war as laborers. The film stars William Holden, Alec Guinness and Jack Hawkins.

5…Extends, as a building..ADDS TO

51…Execs, or outfits hanging in their closets..SUITS

56…Ironic change in destiny … and, literally, what happens in this puzzle’s circles..TWIST OF FATE

7…Hrs. that begin when we “spring forward”..DST

29…”I was with my girlfriend all night,” say..ALIBI

30…No longer encumbered by..RID OF

37…Asian mushroom with an odd spelling..SHIITAKE

43…Packed up for shipping..IN A BOX

45…”The Wind in the Willows” croaker..MR TOAD

57…Part of a tennis match..SET