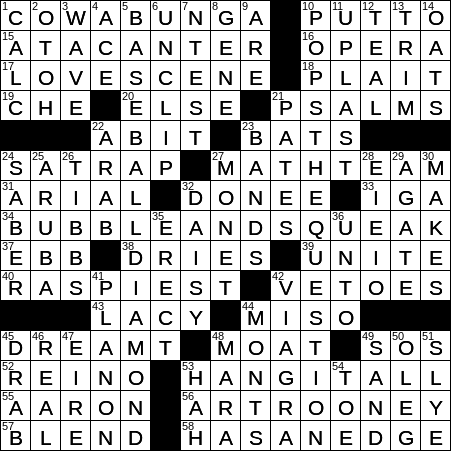 “Cowabunga” is an exclamation adopted by surfers in the sixties. The original use of “cowabunga” was on television, a catchphrase of Chief Thunderthud in “The Howdy Doody Show” in the fifties. The term got even more exposure in the nineties when it was adopted by the “Teenage Mutant Ninja Turtles”.

“Evita” was the follow-up musical to “Jesus Christ Superstar” for Andrew Lloyd Webber and Tim Rice. Both of these works were originally released as album musicals, and very successful ones at that (I remember buying them when they first came out). “Evita” was made into a film in 1996, with Madonna playing the title role and Welsh actor Jonathan Pryce playing her husband Juan Perón.

Antonio Banderas is an actor from Málaga in Andalusia on the southern coast of Spain. Banderas’s breakthrough role in Hollywood was the gay lover of the Tom Hanks character in 1993’s “Philadelphia”. He was married for 20 years to actress Melanie Griffith, whom he met in 1995 while filming “Two Much”.

“Chichester Psalms” is a choral work by Leonard Bernstein that uses extracts from the Hebrew Book of Psalms as the libretto. The piece was commissioned for a choir festival held at Chichester Cathedral in England in 1965, hence the name.

“Satrap” is an old Persian name for a provincial governor. In modern English usage, a satrap is a world leader who is heavily influenced by a superior power.

34 British breakfast dish with an onomatopoeic name : BUBBLE AND SQUEAK

Bubble and squeak is a dish that originated in the UK. The basic dish is made from leftover mashed potato and cabbage, which are mixed together and pan-fried. The dish is so named because the cabbage can make bubbling and squeaking noises as it cooks. We have a similar dish in Ireland called colcannon. I love colcannon, absolutely love it …

Onomatopoeia is the naming of something by vocally imitating the sound associated with it. Examples of onomatopoeia are chirp, clash, click and hiccups.

Aaron Burr was the third vice-president of the US from 1801 to 1805, and served under Thomas Jefferson. In the final year of his term in office, Burr fought an illegal duel and killed his political rival Alexander Hamilton. Burr was charged with several crimes as a result, but those charges were eventually dropped. The Democratic-Republican Party had already decided not to nominate Burr as candidate for vice president to run alongside Jefferson in the 1804 election, largely because the relationship between Vice President Burr and President Jefferson was so poor. The subsequent fallout resulting from the killing of Alexander Hamilton effectively ended Burr’s political career.

Art Rooney was the son of Irish immigrants who left the country during the Potato Famine. Rooney founded the Pittsburgh Pirates football team in 1933, a team that was to become the Pittsburgh Steelers in 1940.

In the world of calculus, the integration function calculates the area between a curve and the x-axis or y-axis.

The verb “were” becomes “are” in the present tense.

Maroon 5 is a rock band from LA. Most of the band members met in high school where they formed a garage band called Kara’s Flowers in 1995. The band reformed as Maroon 5 in 2001 and were a big hit almost straight away. Personally, I haven’t heard of them outside of crosswords …

Ben Folds Five was a rock group for Chapel Hill, North Carolina that was active, on and off, from 1993 until 2003. Ben Folds formed the group, and despite the name, it comprised just three members.

Queen Beatrix International Airport serves Oranjestad, the capital of Aruba in the Caribbean Sea. The airport was named in 1955 for Princess Beatrix of the Netherlands. The name was “upgraded” in 1980 after Princess Beatrix ascended to the Dutch throne.

26 “In the Heat of the Night” detective : TIBBS

From 1899 to 1901, French artist Claude Money made several visits to London, England. During that time, Money four series of paintings of landmarks in the city. Included in this portfolio of work is a series of 19 painting of the Houses of Parliament, all of which share the same viewpoint.

“Love & Other Drugs” is a 2010 movie inspired by the book “Hard Sell: The Evolution of a Viagra Salesman” by Jamie Reidy. Stars of the film are Jake Gylenhall and Anne Hathaway.

In French, the “Alpes” (Alps) is a large range of “monts” (mountains).

Kate Mara is the actress who plays a lead character in the US TV series “House of Cards”. Kate is the sister of fellow actress Rooney Mara, who played the lead in the American version of the film “The Girl with the Dragon Tattoo”.

French-born, American fashion designer Oleg Cassini had two big names particularly associated with his designs. In the sixties he produced the state wardrobe for First Lady Jacqueline Kennedy, and he was also the exclusive designer for Hollywood’s Gene Tierney, who was Cassini’s second wife.