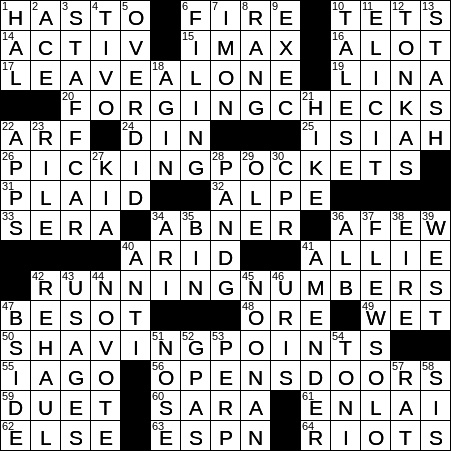 Themed answers are crimes, and are clued with reference to an occupation:

14. When Rosencrantz and Guildenstern are last seen in “Hamlet” : ACT IV

Lina Wertmüller was an Italian movie director of Swiss descent. Wertmüller was the first woman ever to receive an Academy Award nomination for directing. She won for her 1975 film “Seven Beauties”.

20. The blacksmith was busted for __ : FORGING CHECKS

Isiah Thomas played his whole professional career with the Detroit Pistons, and he is now the head coach with the Florida International University Golden Panthers. When you’re out shopping for popcorn, keep an eye out for the Dale & Thomas brand, as it’s co-owned by Isiah Thomas.

31. Pattern for some school uniforms : PLAID

The cartoonist Al Capp set his classic comic strip “Li’l Abner” in the fictional community of “Dogpatch”. According to one of the “Li’l Abner” strips, Dogpatch is located somewhere in the state of Kentucky.

Comedian and actress Jane Curtin was an original cast member of “Saturday Night Live”. She also had leading roles in the hit comedy series “Kate & Allie” and “3rd Rock from the Sun”, as well as the 1993 movie “Coneheads”.

Point shaving is a way to fix the result of a game in a player or players ensure that their team’s win (or sometimes loss) is by a margin small enough to favor someone who has placed a large bet.

The Boca Raton Bowl is an NCAA football bowl game that has been played annually since 2014.

Journalist Gay Talese wrote a 2016 article in the “The New Yorker” revealing that the owner of the Manor House Hotel in Aurora, Colorado was routinely spying on hotel guests through grilles that he had installed in the ceilings of the rooms. Hotel owner Gerald Foos plied his trade as a voyeur for about 30 years. Netflix produced a documentary titled “Voyeur” that explores Foos’ life, and his relationship with Talese.

Pampers is a Procter & Gamble brand of disposable diaper for babies and toddlers that was introduced in 1961.

Regular readers will know that I am unashamedly supportive of my native Irish culture, but I have to tell you that I can’t stand many of the works of James Joyce. I have spent many a fine day traipsing around Ireland learning about him, but I find myself more absorbed by Joyce’s life than by his writing. Having said that, “Ulysses” is an interesting novel in that it chronicles just one ordinary day in the life of a Dubliner named Leopold Bloom. There’s a huge celebration of “Ulysses” in Dublin every year on June 16th, called Bloomsday. The festivities vary from readings and performances of the storyline, to good old pub crawls. “Ulysses” was made into a film of the same name in 1967 starring Milo O’Shea.

53. Blacksmith, miner, marathoner or barber, in this puzzle : PERP

The writer Toni Morrison won the Nobel Prize for Literature in 1993. Amongst other things, Morrison is noted for coining the phrase “our first black President”, a reference to President Bill Clinton.

“Beloved” is a 1998 movie based on the Pulitzer-winning novel by Toni Morrison. Oprah, who produced the film, stars opposite Danny Glover.