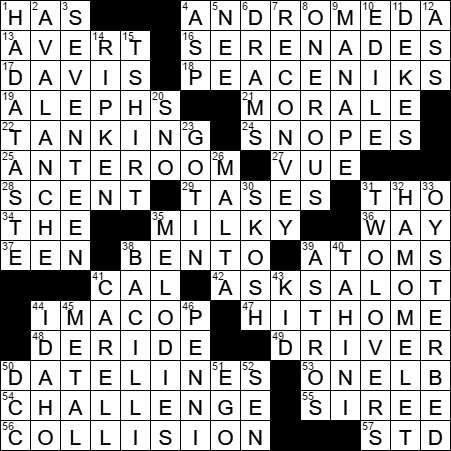 We have a mini-sized theme today, about a maxi-sized event. There are three answers that are interconnected:

Our galaxy is the Milky Way, and the nearest “spiral galaxy” to ours is the Andromeda Galaxy. Andromeda is not the nearest galaxy, as that honor belongs to the Canis Major Dwarf Galaxy.

In terms of astronomy, the Local Group is a group of galaxies including our Milky Way. The Local group comprises over fifty galaxies, with the largest being the Andromeda Galaxy, the Milky Way and the Triangulum Galaxy.

16. Strains at the balcony : SERENADES

The jazz musician Miles Davis was born into a relatively affluent family, so he had plenty of music lessons as a child. After high school, Davis studied at the Juilliard School of Music in New York but he dropped out before finishing his studies. He stated later that the Juilliard classes focused too much on European and “white” music, but he acknowledged that the school gave him a foundation in music theory that helped him in later life.

“Aleph” is the first letter of the Hebrew alphabet, and “beth” the second.

The Talmud is a collection of writings by thousands of rabbis and is a central text in Rabbinic Judaism, second only to the Torah.

Snopes.com is the place to go if you want to check the validity or history of an urban legend or Internet rumor. The site was launched in 1995 by a couple in California, Barbara and David Mikkelson.

The VUE is a compact SUV made by General Motors under the Saturn brand from 2001 to 2009. The VUE was the best-selling of all Saturn models.

The Milky Way is the name given to our own galaxy, the home to the Solar System. In fact, the word “galaxy” comes from the Greek “galaxias” meaning “milky”.

Twilight is the light experienced when the sun is below the horizon, both in the morning and the evening. The prefix “twi-” seems to come from the sense of “half”, and in “half light”. There appears to be no connection to the word “twice”, despite twilight occurring twice each day.

A bento is a single-person meal that is commonly eaten in Japan. A bento can be purchased as a take-out meal, or it may be packed at home. A bento is usually sold as a “bento box”.

“To deride” is to treat with contemptuous mirth. The term comes into English via Old French from the Latin “deridere” meaning “to ridicule”. In turn, “deridere” comes from the prefix “de-” (down) and “”ridere” (to laugh). So, to ridicule or deride is “to laugh down at”.

49. Something hit on a range : DRIVER

56. By some calculations, projected fate of 4-Across and 34-/35-/36-Across in three to four billion years : COLLISION

3. Whitney Houston appeared on its cover in 1981 : SEVENTEEN

“Seventeen” is a monthly magazine aimed at teenage girls that was first issued in 1944.

Man-Ape is a supervillain the Marvel Comics universe. Man-Ape, the alter ego of African warrior M’Baku, usually goes up against the superhero known as the Black Panther.

In the days of the Roman Republic, aediles (also “ediles”) were magistrates who had responsibility for the management and upkeep of public facilities such as public buildings, streets and markets.

Desire is the name of a neighborhood in New Orleans, a destination for a streetcar line. The name “Desire” appears on the front of streetcars bound for that neighborhood, hence the title of the 1947 Tennessee Williams play “A Streetcar Named Desire”.

Marlon Brando won the Oscar for Best Actor for his portrayal of Vito Corleone in the 1972 blockbuster “The Godfather”. He turned down the award and didn’t attend the ceremony. Instead he sent a Native American rights activist called Sacheen Littlefeather who made a speech protesting the depiction of Native Americans in Hollywood movies. Brando wasn’t the first person to refuse an Oscar. George C. Scott did the same thing when he won for playing the title role in 1970’s “Patton”. Scott just didn’t like the whole idea of “competing” with other actors.

26. Valletta is its capital : MALTA

“Skosh” is a slang term meaning “a little bit”, originally military slang that came out of the Korean War. “Skosh” derives from the Japanese word “sukoshi” which translates as “few, little, some”.

“Two Lovers” is a 2008 based on the short story “White Nights” by Russian novelist Fyodor Dostoyevsky. The male lead is Joaquin Phoenix, who gets caught up a kind of love triangle with two women, played by Gwyneth Paltrow and Vinessa Shaw.

“Earworm” is a colloquial term used for a catchy tune that is also somewhat irritating, one that you can’t get out of your head.

“Tahini” is the Arabic name for the paste made from ground sesame seeds. Tahini is a major ingredient in hummus, one of my favorite dishes.

The excellent sitcom “The Office” is set in a branch of a paper company in Scranton, Pennsylvania. If you haven’t seen the original UK version starring Ricky Gervais, I do recommend you check it out. Having said that, the US cast took the show to a whole new level. Great television …

The name of the element “calcium” comes from the Latin “calcis” meaning “lime”. “Quicklime” is a common name for calcium oxide.

A penni was one hundredth of a markka, the currency of Finland that was used until it was replaced by the euro in 2002. The markka was introduced by the Finns in 1860 to replace the Russian ruble.

Sigmund Freud created a structural model of the human psyche, breaking it into three parts: the id, the ego, and the super-ego. The id is that part of the psyche containing the basic instinctual drives. The ego seeks to please the id by causing realistic behavior that benefits the individual. The super-ego almost has a parental role, contradicting the id by introducing critical thinking and morals to behavioral choices.

US Senator Ted Cruz served as Solicitor General for the state of Texas before heading to Washington. Cruz was appointed Solicitor General in 2003 at the age of 32, making him the youngest Solicitor General in the country. Famously, Cruz is an opponent of the Affordable Care Act and made a speech in 2013 in the US Senate on the subject that lasted for 21 hours and 19 minutes. It was the fourth longest speech in the history of the Senate.

16. Strains at the balcony : SERENADES

21. Cheerleaders may raise it : MORALE

49. Something hit on a range : DRIVER

56. By some calculations, projected fate of 4-Across and 34-/35-/36-Across in three to four billion years : COLLISION

3. Whitney Houston appeared on its cover in 1981 : SEVENTEEN

26. Valletta is its capital : MALTA