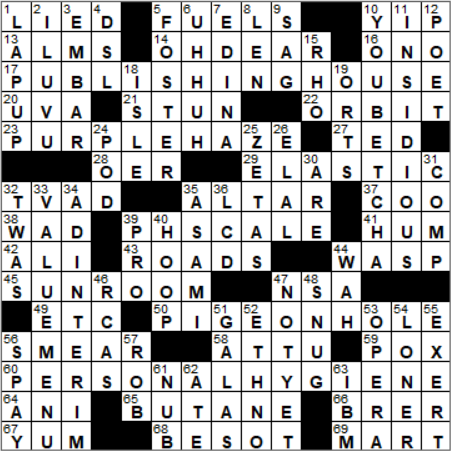 The publishing house of Simon & Schuster is one of the big-four publishers in the English language, alongside Random House, Penguin and HarperCollins. Simon & Schuster started out as a publisher of books of crosswords, would you believe? Richard Simon was asked by his aunt if he knew of any book of crosswords, and as there weren’t any Simon decided to launch a little publishing business with Max Schuster, exploiting a gap in the publishing market. The first book of crosswords was published in 1924, and they’ve been going ever since. And another bit of trivia is that the same Richard Simon was the father of singer-songwriter Carly Simon.

“Purple Haze” is a 1967 song written and recorded by Jimi Hendrix that has been described as a “psychedelic drug song of the sixties”. In fact, the term “purple haze” came to refer to LSD. Hendrix denied any relation of the lyrics to drugs at all.

Oh how I love them …

Taxonomically, doves and pigeons are the only members of the order Columbidae. The terms “dove” and “pigeon” are often used interchangeably. Scientifically speaking, dove species tend to be smaller that pigeon species. Colloquially though, many refer to doves as the white or nearly white species in the family.

Back in the 16th century, a pigeonhole was a small recess used by pigeons for nesting. Towards the end of the 17th century, the term “pigeonholes” had been borrowed to describe compartments at the back of a writing desk. Two hundred years later, we were using the verb “pigeonhole” figuratively, to mean “label mentally”.

58. Westernmost of the Aleutian Islands : ATTU

Attu is the westernmost island in the Aleutian chain, and so is the westernmost part of Alaska. Japanese forces took the island in October 1942, eventually landing as many as 2,900 soldiers there. In May 1943, the US Army retook the island in twenty days of fighting that is now called the Battle of Attu, the only land battle to take place on US soil during WWII. I am very proud of my father-in-law, who served in the Aleutians during WWII …

Chicken pox is a viral infection, and a classic disease of childhood most commonly caught by 4-10 year olds. There is a complication that can arise later in life if the virus reactivates to cause shingles.

Br’er Rabbit and Br’er Fox are characters in the Uncle Remus stories, written by Joel Chandler Harris. The “Uncle Remus” stories are adaptations of African American folktales that Harris collected across the Southern States. “Br’er” is an abbreviated form of “brother”.

“To embar” is to hinder or stop, to perhaps hinder with a bar. The related term “embargo” describes the action of barring vessels from entering or leaving a nation’s ports.

I used to walk my dog right past author Len Deighton’s house years ago, as we lived in the same village in Ireland (probably my only claim to “fame”). Deighton wrote the excellent espionage thriller “The IPCRESS File”, made was into a 1965 movie starring Michael Caine.

The Screen Actors Guild Awards are presented annually by the SAG-AFTRA labor union that represents film and television personalities. The awards were initiated in 1995. The most SAG Awards have been won by actor Alec Baldwin.

Robert Browning met fellow poet Elizabeth Barrett in 1845. Elizabeth was a sickly woman, confined to her parents’ house in Wimpole Street in London, largely due to the conservative and protective nature of her father. Robert and Elizabeth eventually eloped in 1846, and lived in self-inflicted exile in Italy. Away from the country of his birth, Browning was moved to write his now famous “Home Thoughts, From Abroad”, the first line of which is “Oh, to be in England …”

The poem “A Visit from St. Nicholas” was published anonymously in 1823, and is better known today by its first line “‘Twas the night before Christmas”. Most scholars believe that the poem was written by Clement Clarke Moore, a theologian from New York City. Others say that it was written by Henry Livingston, Jr. a poet from Upstate New York.

We use the Latin phrase “ad interim” to mean “temporarily”. A literal translation would be “in the time between”.

A much-used pencil might be worn down to a nub.