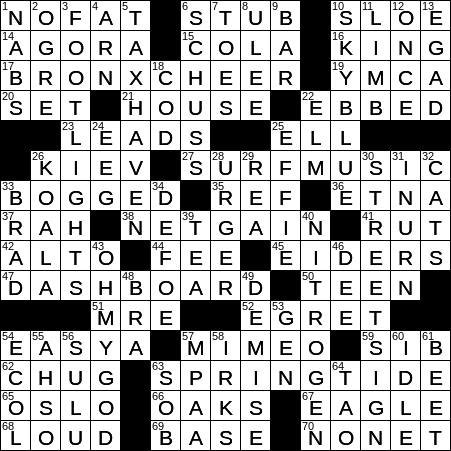 Themed answers look like common phrases, but are clued with reference to a brand of laundry detergent:

The mixed drink known as a Long Island iced tea uses the name “iced tea” as it physically resembles and somewhat tastes like sweetened iced tea. The “Long Island” reference in the name is disputed, but no doubt there is a connection to the New York island. A Long Island iced tea can be very alcoholic indeed, with the recipe calling for tequila, vodka, light rum, triple sec and gin, with some sour mix and a splash of cola.

Chicken Kiev may indeed be a Ukrainian dish, one named for the capital city of Kiev. It is a boneless chicken breast rolled around garlic, herbs and butter, breaded and deep fried. It was my Dad’s favorite …

The Broadway musical “Dreamgirls” follows the lives of a fictional female singing trio named “The Dreams”. The stage musical was adapted for the big screen in 2006 film of the same name starring Jennifer Hudson, Beyoncé Knowles and Anika Noni Rose as the trio.

Jennifer Hudson is a singer and actress who had her career breakthrough by appearing as a finalist in 2004 on the show “American Idol”. Hudson went through a very difficult period in 2008 when her mother, her older sister and her nephew with shot dead by her brother-in-law.

“V for Vendetta” is a 2006 movie based on the political thriller graphic novel of the same name by Alan Moore and David Lloyd. The film stars Hugo Weaving, Natalie Portman and Stephen Rea. Two other Moore novels made it to the big screen: “From Hell” and “The League of Extraordinary Gentlemen”.

Lilian Jackson Braun was the author of the “The Cat Who” series of mystery novels. The main characters in the stories are an ex-reporter named James Qwilleran and his Siamese cats called KoKo and Yum-Yum.

A brad is a slender wire nail with a relatively small head that is typically used to tack pieces of wood together, i.e. to fasten either temporarily or with minimal damage to the wood. Nowadays, brads are commonly applied using a nail gun.

Daniel Defoe is most famous today as an author, of the novel “Robinson Crusoe” in particular. Defoe was also a trader, and a spy for King William III.

“Moll Flanders” is a novel written by Daniel Defoe in 1722, three years after he achieved fame with “Robinson Crusoe”. The book’s full title gives a lot of insight into the storyline:

The Fortunes and Misfortunes of the Famous Moll Flanders, Etc. Who Was Born In Newgate, and During a Life of Continu’d Variety For Threescore Years, Besides Her Childhood, Was Twelve Year a Whore, Five Times a Wife [Whereof Once To Her Own Brother], Twelve Year a Thief, Eight Year a Transported Felon In Virginia, At Last Grew Rich, Liv’d Honest, and Died a Penitent. Written from her own Memorandums.

Ammonia is a colorless gas with a very strong smell, and a chemical formula NH3. The name “ammonia” comes from salt deposits (actually the salt “ammonium chloride”) that the Romans collected near the Temple of Amun in ancient Libya.