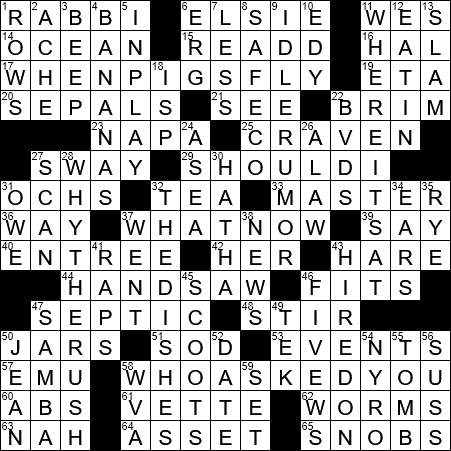 Themed answers are exclamations. Each starts with one of the FIVE WS, the five questions that journalists try to answer when gathering information for a story:

Elsie the Cow is the mascot of the Borden Company. Elsie first appeared at the New York World’s Fair in 1939, introduced to symbolize the perfect dairy product. She is so famous and respected that she has been awarded the degrees of Doctor of Bovinity, Doctor fo Human Kindness and Doctor of Ecownomics. Elsie was also given a husband named Elmer the Bull. Elmer eventually moved over to the chemical division of Borden where he gave his name to Elmer’s Glue.

“Prince Hal” is a term used for Prince Henry, the son of the title character in Shakespeare’s plays “Henry IV, Part 1” and “Henry IV, Part 2”. Prince Hal then becomes king in Shakespeare’s “Henry V”.
Hal Prince is a theatrical producer and director who is mainly associated with Broadway shows such as “Show Boat”, “Cabaret”, “The Phantom of the Opera”, “Evita” and “Sweeney Todd”. Prince has won 21 Tony Awards, more than any other individual.

In a flower, the sepals are the green, leaf-like structures that are “interleaved” with the petals, providing support. Prior to acting as support for the petals, the sepals protect the flower in bud.

Back in the 1780s, a “snob” was a shoemaker or a shoemaker’s apprentice. By the end of the 18th century the word was being used by students at Cambridge University in England to refer to all local merchants and people of the town. The term evolved to mean one who copies those who are his or her social superior (and not in a good way). From there it wasn’t a big leap for “snob” to include anyone who emphasized their superior social standing and not just those who aspired to rank. Nowadays a snob is anyone who looks down on those considered to be of inferior standing.
“Snoot” is a variant of “snout” and is a word that originated in Scotland. The idea is that someone who is snooty, or “snouty”, tends to look down his or her nose at the rest of the world.

4. Fruit that grows in bunches : BANANAS

Safeco Field is the home of the Seattle Mariners. Safeco Insurance was the highest bidder when it came to christening the new stadium opened in 1999, paying $40m for a 20-year contract.

The men’s underwear known as BVDs are made by the Bradley, Voorhees & Day. The company was started in 1876 to make bustles for women, and is named for its founders.

The phrase “cool your heels” was originally used to mean “cool your feet” after they’d heated up from walking. The ironic usage, meaning “take your time, slow down”, has been around since the early 17th century.

Hatha yoga is a yoga system developed in 15th century India. Traditional Hatha yoga is a more “complete” practice than often encountered in the west, involving not just exercise but also meditation and relaxation.

The samba is a Brazilian dance that is very much symbolic of the festival of Carnival. Like so much culture around the world, the samba has its roots in Africa, as the dance is derived from dances performed by former slaves who migrated into urban Rio de Janeiro in the late 1800s. The exact roots of the name “samba” seem to have been lost in the mists of time. However, my favorite explanation is that it comes from an African Kikongo word “semba” which means “a blow struck with the belly button”. We don’t seem to have a need for such a word in English …

The “TekWar” series of science-fiction novels was co-authored by Ron Goulart and the actor William Shatner, although it’s only Shatner’s name that appears on the book covers. The stories center around the microchip “drug” called “tek” that dominates the TekWar universe.

Laura Nyro was a singer-songwriter from the Bronx, New York. Nyro had success with her own recordings, but her songs were even more successful when recorded by other big names. Two of Nyro’s compositions were “Eli’s Coming” recorded by Three Dog Night, and “Stoney End” by Barbra Streisand.
“Stoned Soul Picnic” is a song by singer-songwriter Laura Nyro. Nyro recorded the song herself in 1968, but a cover version recorded the same year by the 5th Dimension is best known.

The state of West Virginia (WVA) was formed during the civil war when the western counties in the old state of Virginia voted to secede from the Confederate state.
Harpers Ferry is a town in West Virginia located at the confluence of the Potomac and Shenandoah rivers. We tend to remember Harpers Ferry as the place where John Brown led a raid on a federal armory during the Civil War with the intent of arming slaves.