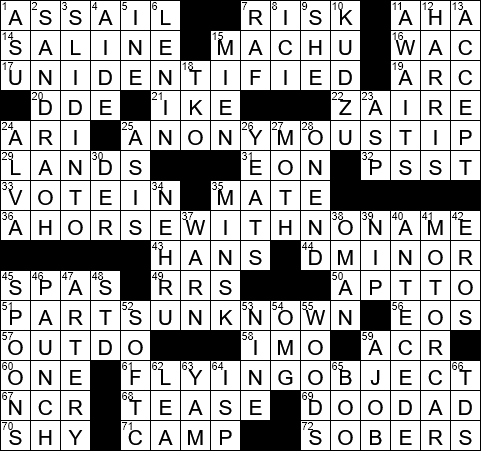 Each of today’s themed answers includes a synonym of “nameless”.

In 1952, the USAF revived its studies of reported sightings of unidentified flying objects (UFOs) in a program called Project Blue Book. Project Blue Book ran from 1952 until it was shut down in 1969 with the conclusion that there was no threat to national security and that there were no sightings that could not be explained within the bounds of modern scientific knowledge.

Aristotle Onassis was born to a successful Greek shipping entrepreneur in Smyrna in modern-day Turkey. However, his family lost its fortune during WWI and so Aristotle worked with his father to build up a new business empire centered on the importation of tobacco. In 1957, Aristotle founded the Greek national airline, what is today called Olympic Air, and he also got into the business of shipping oil around the world. He married Athina Livanos in 1946, the daughter of a wealthy shipping magnate. They couple had two children together, with one being the famous Christina Onassis. Livanos divorced Onassis on discovering him in bed with the opera singer Maria Callas. Onassis ended his affair with Callas in order to marry Jackie Kennedy in 1968.

“A Horse with No Name” is a fabulous song from the early seventies that was released by the band America. The song was originally banned by some radio stations in the US, due to claims that the “horse” in the title is a reference to the drug heroin.

The wonderful storyteller Hans Christian Andersen became very successful in his own lifetime. In 1847 he visited England for the summer and made a triumphal tour of English society’s most fashionable drawing rooms. There Andersen met with the equally successful Charles Dickens, and the two seemed to hit it off. Ten years later Andersen returned to England and stayed for five weeks in Dickens’ home as his guest. Dickens published “David Copperfield” soon after, and supposedly the less than lovable character Uriah Heep was based on Dickens’ house guest Hans Christian Andersen. That wasn’t very nice!

Beethoven’s Ninth Symphony is his wonderful “Choral” symphony. When it was composed in 1824 it was the first time that a major composer had used voices in a symphony. By the time of the Ninth’s premier, Beethoven was essentially deaf. He insisted on sharing the stage with the musical director (who was conducting), and was visibly counting out time but was off by quite a few measures. When the last notes were played there was enthusiastic applause, although Beethoven was still conducting. The lead contralto had to walk over to Beethoven, stop him, and turn him to the audience to receive his adulation.

NCR is an American company that has been in business since 1884, and was originally called the National Cash Register Company. The company has done well in a market where new technologies seem to be constantly disrupting the status quo.

The Canadian actress Sandra Oh is very much associated these days with the role of Dr. Cristina Yang on “Grey’s Anatomy”. However, my favorite of Oh’s performances are in the movies “Under the Tuscan Sun” and “Sideways”.

At the second party congress of the Marxist Russian Social Democratic Labour Party in 1903, a split developed. The faction with the most support was led by Vladimir Lenin, and as they were in the majority, they became known as the Bolsheviks, derived from the Russian word for “more” or “majority”. Lenin and the Bolsheviks led the October Revolution of 1917, as a result of which Lenin came to power. He headed the new Soviet State during it’s formative years.

The Royal Air Force (RAF) is the oldest independent air force in the world (i.e. the first air force to become independent of army or navy forces). The RAF was formed during WWI on 1 April 1918, a composite of two earlier forces, the Royal Flying Corps (part of the Army) and the Royal Naval Air Service. The RAF’s “finest hour” has to be the Battle of Britain when the vastly outnumbered British fighters fought off the might of the Luftwaffe causing Hitler to delay his plan to cross the English Channel. This outcome prompted Winston Churchill to utter the memorable words

Kudzu is a climbing vine that is native to southern Japan and southeast China. “Kudzu” is derived from the Japanese name for the plant, “kuzu”. Kudzu is a vigorously growing weed that chokes other plants by climbing all over them and shielding them from light. Kudzu was brought to the US from Asia for the Japanese pavilion in the 1876 Centennial Exposition in Philadelphia. It was marketed as an ornamental, especially in the southeast of the country, and now is all over the region. Kudzu earned itself the nickname “the vine that ate the South”.

The market research firm known as “The Harris Poll” was founded in 1963 by Louis Harris with the specific aim of conducting polls for political candidates. Louis Harris had worked privately for the successful 1960 presidential campaign of John F. Kennedy.

The larvae of several types of moth are noted for eating fabrics made from natural fibers such as wool or cotton. Many people store woolens in cedar chests believing that the scent of the wood prevents a moth infestation. In fact, the only known effective repellent is the naphthalene found in mothballs, which might be a health concern for humans. One way to kill moth larvae in fabric is to freeze the garment for several days at a temperature below 8 degrees centigrade.

Minsk is the capital of Belarus, formerly known as the Belorussian Soviet Socialist Republic. One of Minsk’s more infamous residents was Lee Harvey Oswald, who lived there from 1960 to 1962.

The Arabian Sea is an arm of the Indian Ocean that lies off the south coasts of Oman, Yemen, Pakistan and Iran, and is bounded in the west by Somalia, and in the east by India.

The first letter C in the word “accept” is a hard C, and second is a soft C.

“Crikey” is an exclamation, and is probably a euphemism for “Christ”.

17. With 61-Across, dubious tabloid image : UNIDENTIFIED …