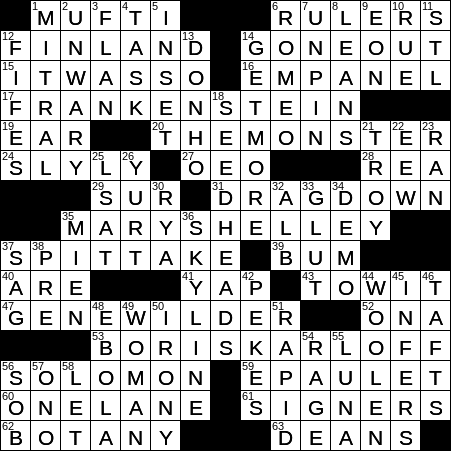 Themed answers all relate to the 1818 novel “Frankenstein”:

A mufti is jurist who interprets Islamic law. A nonbinding opinion issued by a mufti is a fatwa.

The Nordic country of Finland is the most sparsely populated nation in the European Union. The relatively modest population of 5.5 million people live in the eighth largest country on the continent.

Mary Shelley’s Gothic novel has the full title of “Frankenstein; or, The Modern Prometheus”. The subtitle underscores one of the themes of the book, i.e. a warning about the expansion into the Industrial Revolution.

An otoscope is that instrument that an ear, nose and throat specialist (ENT) uses to look into the interior of one’s ears.

Not only did Mary Shelley pen the famous novel “Frankenstein”, she also edited the works of the poet Percy Bysshe Shelley, who was her husband.

The comic maneuver in which someone spits out a drink in response to a joke or a surprising statement, that’s called a “spit take”.

Gene Wilder was an actor noted for his comedic roles. Wilder had a successful collaboration with Mel Brooks on three great films: “The Producers”, “Blazing Saddles” and my favorite, “Young Frankenstein”. For a while, Wilder dated his “Young Frankenstein” co-star Teri Garr, but he was married most famously to “Saturday Night Live” star Gilda Radner.

I am not really a big fan of movies by Mel Brooks, but 1974’s “Young Frankenstein” is the exception. I think the cast has a lot to do with me liking the film, as it includes Gene Wilder (Dr. Frankenstein), Teri Garr (Inga), Marty Feldman (Igor) and Gene Hackman (Harold, the blind man).

According to the Bible, Solomon was the son of David and a king of Israel. Notably, Solomon is described as being very wise. In the story known as “the Judgment of Solomon”, Solomon was asked to decide who of two quarreling women was the mother of a baby. He suggested that they cut the baby in two with a sword, forcing one of the women to surrender the child rather than see it die. Solomon gave the child to the woman who showed compassion.

An epaulet (also “epaulette”) is an ornamental shoulder pad, particularly one worn with a military uniform. The term “epaulet”comes from French, and translates literally as “little shoulder”.

The mitral valve lies between the left atrium and left ventricle in the heart.

6 “Did my heart love till now?” speaker : ROMEO

Here are some passionate lines from William Shakespeare’s “Romeo and Juliet” that are spoken by Romeo:

Did my heart love till now? forswear it, sight! For I ne’er saw true beauty till this night.

The singer and entertainer Don Ho apparently had a pretty liberal arrangement with his wife. When Ho was touring with his two backing singers, Patti Swallie and Elizabeth Guevara, all three of them shared a room together. He had two children with each of his roommates, giving a total of ten kids including the six he had with his wife. The arrangement was quite open, it seems, with all ten kids visiting each other regularly. To each his own …

The name “dandelion” comes from the French “dent de lion” meaning “lion’s tooth”. The name is a reference to the coarse, tooth-like edges of dandelion leaves.

A rya is a traditional Scandinavian rug that was originally used as heavy covers by mariners as an alternative to furs. The name “rya” comes from a village in southwest Sweden.

A house cow is a cow that is kept by a household primarily to provide milk for the home kitchen, but also manure for the garden. President William Taft kept a house cow at the White House, a Holstein Friesian named “Pauline Wayne” that was gifted to him by a US senator from Wisconsin.

“Woman” is a lovely song written by John Lennon that he recorded in 1980. The song was released in 1981, just a month or so after Lennon was murdered outside his New York apartment building. Lennon wrote the song as an ode to his wife Yoko Ono, and to women in general. He also stated that “Woman” was a grown-up version of “Girl”, a song that he wrote for the Beatles in 1965.

The lime-green luna moth is one of the largest moths found in North America, growing to a wingspan of up to 4½ inches.