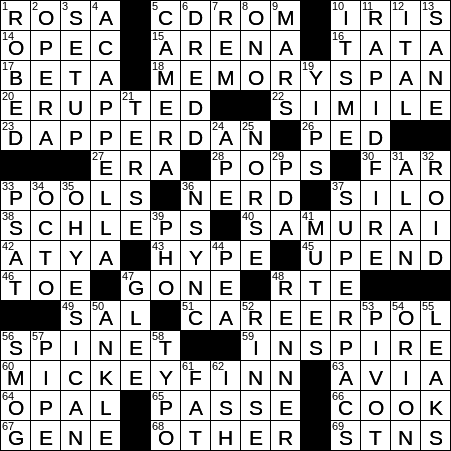 Themed answers each nd with a word that becomes the adjectival form of a country name with the addition of the suffix -ISH:

1. Parks who wouldn’t give up her bus seat : ROSA

A CD case is also known as a jewel box, and I am really not sure why. I’ve heard some explanations, but not one that I really buy …

Our word “schlep” means “carry, drag”. “Schlep” comes from Yiddish, with “shlepen” having the same meaning.

Margaret Mitchell’s 1936 novel “Gone with the Wind” earned the author a Pulitzer in 1937. Mitchell started writing the book in 1926 as a way to pass the time while she was recuperating from injuries sustained in a car crash. The title comes from a poem by English writer Ernest Dowson:

I have forgot much, Cynara! gone with the wind,
Flung roses, roses riotously with the throng,
Dancing, to put thy pale, lost lilies out of mind…

51. One making a living in government, briefly : CAREER POL

“Spinet” is the name given to a smaller version of keyboard instruments, such as a small harpsichord, piano or organ. Spinets are still made today, as smaller and cheaper versions of full-size instruments.

A Mickey Finn (sometimes just “Mickey”) is a drink that has been doctored with an incapacitating drug. It’s said that the original “Mickey Finn” was was a bartender at the Lone Star Saloon in Chicago around 1900. According to reports in local newspapers, said Mickey Finn routinely added knockout drops to the drinks of customers in order to rob them.

“Cafeteria” is a Mexican Spanish word meaning “coffee store” that we imported into American English around 1840. Somehow, that coffee store became a self-service dining establishment in the 1890s.

The Latin for “work” is “opus”, with the plural being “opera”. We sometimes also use the plural “opuses” in English.

John Lennon and Yoko Ono had a very public honeymoon in a hotels in Amsterdam and then Montreal, when they staged their famous “bed-in” for peace. In answering questions from reporters Lennon found himself often repeating the words “give peace a chance”. While still in bed, he composed his famous song “Give Peace a Chance” and even made the original recording of the song in the Montreal hotel room, with reporters present, and with a whole bunch of friends. The song was released later in 1969 and became a smash hit. Writing credit was initially given to Lennon-McCartney, as was the agreement between John Lennon and Paul McCartney. Later versions of the song were credited just to Lennon, even though Lennon stated that Yoko Ono actually wrote the song with him.

Orangutans (also “orangs”) are arboreal creatures, the largest arboreal animals known to man. They are native to Indonesia and Malaysia, and live in the rainforests. Like most species in rainforests these days, orangutans are endangered, with only two species surviving. The word “orangutan” is Malay, meaning “man of the forest”.

“Bye Bye Bye” is a 2000 hit song recorded by the boy band NSYNC. It was originally written another boy band, the English group 5ive, but they passed on it.

Jeremy Renner is an actor from Modesto, California whose big break came playing the lead role in the 2008 movie “The Hurt Locker”. Since then, Renner has broken into the world of superhero movies, playing Hawkeye in 2012’s “The Avengers”. I liked him best though in the 2012 action film “The Bourne Legacy”.

Corncob pipes are made from cobs that have been dried for two years and then hollowed out into the shape of a bowl. Famous smokers of corncob pipes were General Douglas MacArthur, Mark Twain, Norman Rockwell as well as Popeye and Frosty the Snowman.