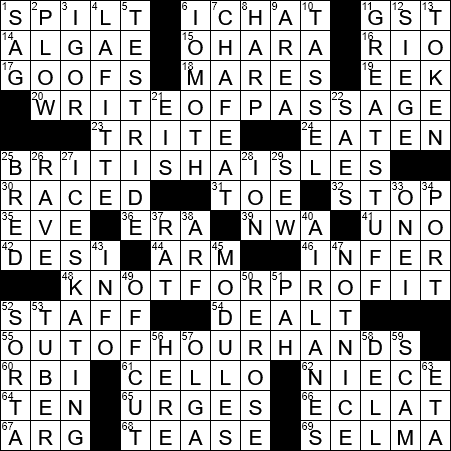 Plankton are organisms that float in water and are incapable of swimming against a current. Plankton can be classified into four broad groups:

As casting proceeded for the movie version of “Gone With the Wind”, Clark Gable was a shoo-in from day one. The role of Scarlett O’Hara was considered very desirable in the acting community, with Bette Davis on the short list, and Katherine Hepburn demanding an appointment with producer David O. Selznick to discuss the role. Vivien Leigh was an unlikely contender, an English actress for the definitive Southern belle role. Selznick was adamant though, and stuck by his preference for Leigh despite a lot of protests.

The 2014 World Cup Final was played in Rio de Janeiro between Germany and Argentina. Germany emerged victorious, marking the fourth time that a German team won the tournament. However, 2014 was the first time a team representing a unified Germany became world champions.

20. What Darwin did aboard the Beagle? : WRITE OF PASSAGE (sounds like “rite of passage”)

Englishman Charles Darwin studied medicine at the University of Edinburgh in Scotland but neglected his studies largely due to his interest in nature and natural history. In the early 1830s, a friend put forward Darwin’s name as a candidate for the post of “collector” on the voyage of HMS Beagle. The Beagle was intending to spend two years at sea primarily charting the coast of South America. The voyage ended up taking five years, during which time Darwin sent back copious letters describing his findings. Back in Britain these letters were published as pamphlets by a friend and so when Darwin eventually returned home in 1836, he had already gained some celebrity in scientific circles. It was while on the Beagle that Darwin developed his initial ideas on the concept of natural selection. It wasn’t until over twenty years later that he formulated his theories into a scientific paper and in 1859 published his famous book “On the Origin of the Species”. This original publication never even mentioned the word “evolution” which was controversial even back then. It was in 1871 that Darwin addressed head-on the concept that man was an animal species, in his book “The Descent of Man, and Selection in Relation to Sex”.

The British Isles comprise over six thousand islands off the northwest coast of Europe, the two largest being the islands of Great Britain and Ireland. Back in my homeland, the Republic of Ireland, we’re not too fond of the term “British Isles”, as it tends to awaken memories of the Norman invasion and the Tudor conquest. We tend to go with the term “Britain and Ireland”.

WALL-E is a very cute Pixar movie that was released in 2008. The hero of the piece is a robot named WALL-E, who loves his “Hello Dolly”, and who falls in love with a robot robot EVE.

Northwest Airlines (NWA) was founded in 1926 in Detroit, and took its name from the Northwest Territory. The airlines original mission was to transport mail for the US Post office, but Northwest branched out into carrying passengers relatively quickly, in 1927. Northwest merged with Delta in 2008-2010, resulting in the world’s largest airline at that time. However, it was the Northwest name that was retired.

In my youth I remember being taught a great card game by a German acquaintance of mine, a game called Mau Mau. Years later I discovered that Uno is basically the same game, but played with a purpose-printed deck instead of the regular deck of playing cards that’s used for Mau Mau. I hear that Mau Mau is derived from the game called Crazy Eights.

In the children’s novel “The Wonderful Wizard of Oz” by L. Frank Baum, Dorothy Gale lives with her Auntie Em and Uncle Henry.

The lab assistant named Igor has turned up in many movies in recent decades, and usually appears as the aide to Dr. Frankenstein. Paradoxically, in Mary Shelley’s original novel, Frankenstein had no assistant at all. Further, the lab assistant introduced in 1931 in the first of the “Frankenstein” series of movies was named Fritz. Bela Lugosi played a character named Ygor in “Frankenstein” sequels in 1939 and 1946, but he was a blacksmith and didn’t work in the lab.

Jean Lafitte was a French pirate who plied his trade in the Gulf of Mexico. Lafitte helped Andrew Jackson in the Battle of New Orleans towards the end of the War of 1812, in return for a pardon for his pirating activities.

6. Insect with eyespots on its wings : IO MOTH

The Io moth is a colorful moth that is native to North America. It has a large spot on either wing that resembles an eye. The “eyes” work as a disguise, as the moth can look like the face of a mammal, and hence ward off potential moth predators.

As you might imagine, I’ve never been to a rave, and don’t have one upcoming in my diary. And as raves often start at 2 a.m. then I’m unlikely ever to experience one. A rave is generally an all-night party featuring loud, electronically-synthesized music usually played by a DJ as opposed to a live band.

“The One I Love” is a song released in 1987 by the rock band R.E.M. The lyrics are somewhat cynical. The song starts out with a promising “This one goes out to the one I love”. The second line is less wholesome, “A simple prop to occupy my time” …

Southwest Airlines is the world’s largest low-cost passenger airline. I’ve always admired the Southwest operation and found that the company knows to keep costs under control while maintaining a high level of customer service. One strategy the company used for decades was only to operate Boeing 737 aircraft, which kept maintenance and operating costs to a minimum.

Dell, the computer manufacturer, is named after the company’s founder Michael Dell. Michael Dell started his company in his dorm room at college, shipping personal computers that were customized to the specific needs of his customers. He dropped out of school in order to focus on his growing business, a decision that I doubt he regrets. Michael Dell is now one of the richest people in the world.