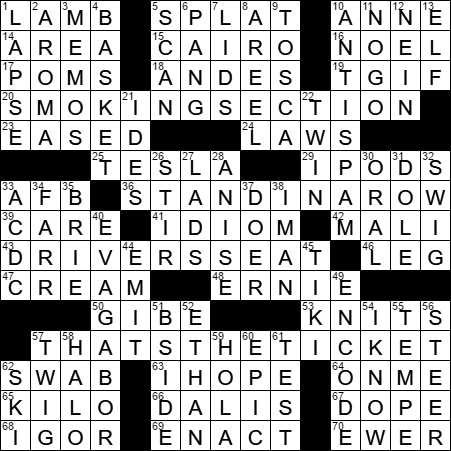 Today’s themed answers end with specifications often found on a TICKET to an event:

The Pomeranian is a breed of small dog, named for the Pomerania region of Europe (part of eastern Germany and northern Poland). The breed was much loved by the royalty of Europe in the 17th and 18th centuries. In the 19th century, Queen Victoria owned a particularly small Pomeranian. Due to the notoriety of the monarch’s pet, the Pomeranian was bred for small size, so that during the Queen’s admittedly long reign, the size of the average “pom” was reduced by 50% …

“Rubber Duckie” is a song performed by the muppet Ernie on “Sesame Street”. Rubber Duckie is also the name of Ernie’s favorite toy, his rubber duck. “Rubber Duckie” was released as a single in 1970 and actually made it into the charts.

The artist Salvador Dalí liked to make a splash in public. He was known to walk an anteater on a lead around Paris. He also brought an anteater on stage to an interview on “The Dick Cavett Show” in 1970.

Our use of the word “dope” to mean “inside information” probably comes from horse racing. The idea is that a better might have information about which horse has been drugged (doped) to influence its performance.

Back in the 1930s, Earl Tupper was working at the DuPont Chemical Company, and from DuPont obtained inflexible pieces of polyethylene slag. Tupper purified the slag and shaped it into unbreakable containers. He added airtight lids with a “burping seal”, which were provided tight seals similar to that provided by the lids on paint cans. He called his new product Tupperware.

Unlike so many operas, Giacomo Puccini’s “Tosca” was a big hit right from day one, when it was first performed in 1900 at the Teatro Costanzi in Rome. “Tosca” is currently the eighth-most performed opera in America.

Nürnberg (anglicized as “Nuremberg”) is a Bavarian city located north of Munich. Historically it is remembered for the huge Nazi Nuremberg rallies, and the Nuremberg trials that took place at the end of WWII. Nürnberg is sometimes confused with the city of Nürburg in the west of Germany, famous for the Nürburgring race track.

In Act I of William Shakespeare’s “Julius Caesar” a soothsayer warns the doomed emperor to “beware the Ides of March”. Caesar ignores the prophecy and is subsequently killed on the steps of the Capitol by a group of conspirators on that fateful day.

James Dole lent his name to today’s Dole Food Company. James Dole was known as the Pineapple King, as he developed the pineapple industry in Hawaii and founded the Hawaiian Pineapple Company, the forerunner to the Dole Food Company. Dole might have had some help on the way, as he was cousin to Sanford B, Dole, President of the Republic of Hawaii from 1894 to 1900.

33. Band with a voltage symbol in its logo : AC/DC

Brie is a soft cheese that is named after the French region in which it originated. Brie is similar to the equally famous (and delicious) Camembert.

A schuss is a very fast run downhill run in skiing, not taking any turns to slow the pace of the descent. “Schuss” is a German word for “shot”.

“Slalom” is an anglicized version of the Norwegian word “slalam” that translates as “skiing race”. There is a longer version of the traditional slalom that is called giant slalom.

33. Band with a voltage symbol in its logo : AC/DC