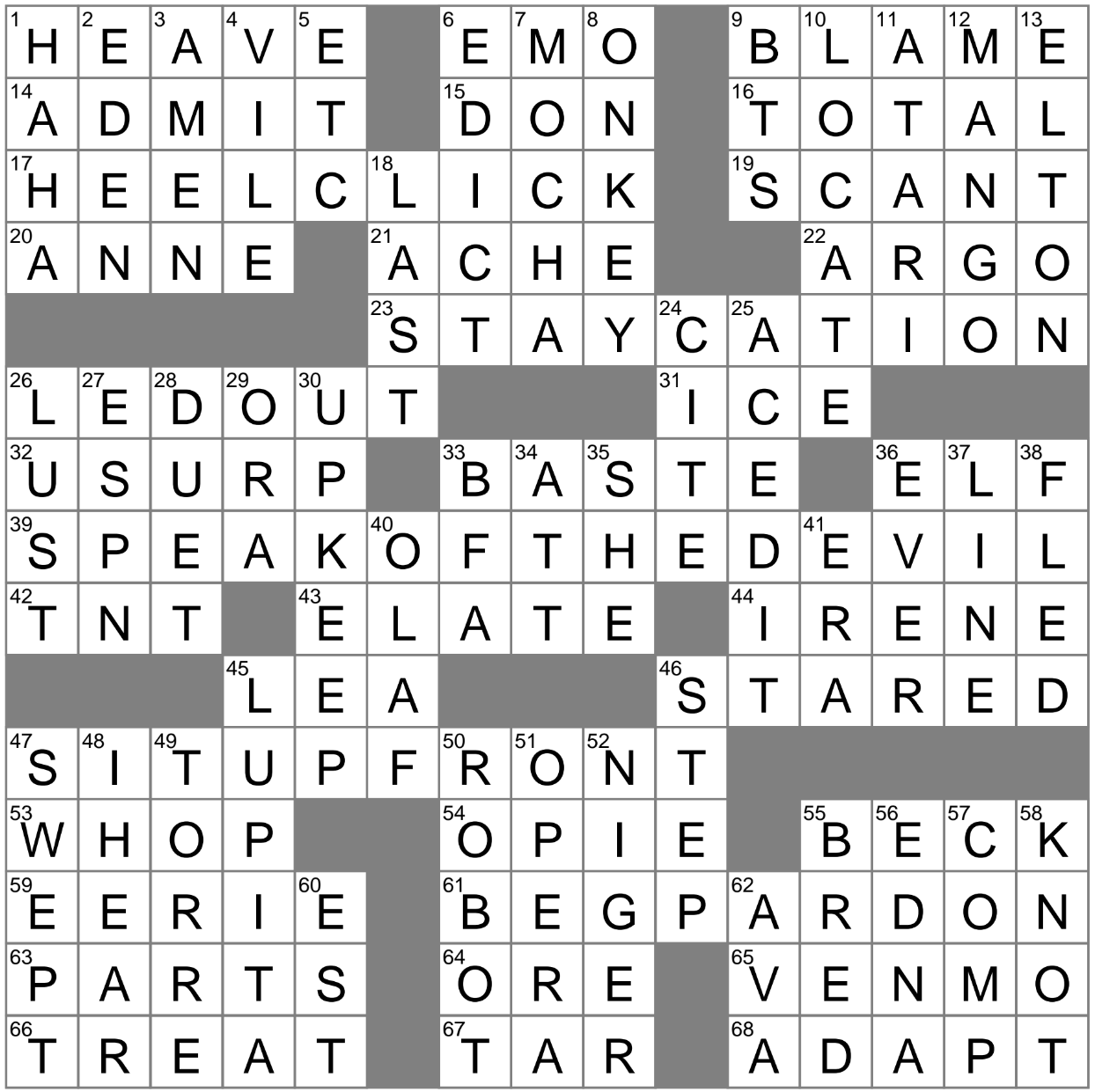 Themed answers each start with a command given to a dog, the obeying of which might earn it a TREAT:

To usurp is to seize and hold by force. The term “usurp” comes to us from Latin via French, from “usus” (a use) and “rapere” (to seize).

“Inside the NBA” is a postgame show that airs on TNT. The list of regulars on the show includes ex-players Charles Barkley and Shaquille O’Neal.

“Lead Belly” was the nickname of blues guitarist Huddie Ledbetter. Ledbetter’s name was often written as “Leadbelly” on many of his records, although he himself wrote it as “Lead Belly”.

To be at someone’s beck and call is to be ready to do what that person wants. The term “beck” describes a muted signal used to “beckon”.

Mocha is a port city in Yemen on the Red Sea and was once the principal port for the capital city of Sana’a. Mocha was the major marketplace in the world for coffee until the 1600s, and gave its name to the Mocha coffee bean, which in turn gave its name to the mocha brown color, and the flavor of coffee infused with chocolate.

Elton John had nine number-one hits in the US:

The initialism “ESPN” stands for Entertainment Sports Programming Network. ESPN is a cable network that broadcasts sports programming 24 hours a day, and was launched back in 1979. ESPN has a lot of ardent fans. Several parents have named their children Espn (usually pronounced “Espen”) in honor of the network.

The powerful phrase “Nevertheless, she persisted” was used by Senator Mitch McConnell in reference to Senator Elizabeth Warren’s comments criticizing the civil rights record of future Attorney General Jeff Sessions. The term went viral soon after, and has been adopted by the feminist movement.

Our word “queue”, meaning “waiting line”, comes from French. “Queue” is the French word for “tail”, and the phrase “queue à queue” translates as “one after another” (literally “tail to tail”).

In the 2013 animated film “Frozen”, Olaf is a happy-go-lucky snowman who provides a lot of comic relief in the movie. He is voiced by actor and comedian Josh Gad.

Lupita Nyong’o is a Kenyan-Mexican actress who was born in Mexico, raised in Kenya, and educated in the US. Nyong’o got her big break in movies with an Oscar-winning supporting role in the 2013 film “12 Years a Slave”. She was named “People” magazine’s “ Most Beautiful Woman” in 2014.

49 MLB exec Joe who was the Yankees’ manager for 12 seasons : TORRE

As a manager, Joe Torre was part of four World Series wins, all of them with the New York Yankees baseball team. Torre is an Italian American who was born in Brooklyn, New York. During the run up (pun intended!) to the 2006 Winter Olympics in Turin, Torre carried the Olympic flame part of the way through Florence in Italy, handing it over to the next runner at the famous Ponte Vecchio. I’d guess that was quite a thrill for him …

Space opera is a type of science fiction with storylines that resemble those in westerns, but set in outer space in the future. The term “space opera” derives from “horse opera”, which is used to describe formulaic western films.

Edna St. Vincent Millay was an American poet and playwright, and the third woman to receive the Pulitzer Prize for Poetry (in 1923 for “The Ballad of the Harp-Weaver”). Millay was noted not only for her work, but also for the open arrangement that she and her husband had in their marriage. Millay took many lovers, including the poet George Dillon for whom she wrote a number of sonnets.

“Abbott Elementary” is a sitcom in the mockumentary genre. The show was created by and stars Quinta Brunson as a cup-half-full second-grade teacher in a Philadelphia public school. The premise of “Abbott Elementary” is that a film crew is making a documentary about the lives of teachers working in underfunded schools.