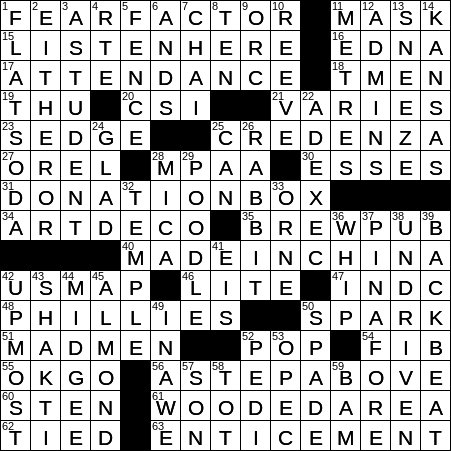 “Fear Factor” is really obnoxious (my opinion!) reality show that originally aired from 2001 to 2006. Contestants had to do some pretty disgusting things in order to win. “Fear Factor” is a remake of a Dutch show called “Now or Neverland”.

A T-man is a law-enforcement agent of the US Treasury (T stands for “Treasury”).

In modern terms, a credenza can be a wooden sideboard in a dining room from which buffet meals can be served. Back in 16th century Italy, the act of “credenza” was the tasting of food and drink by by a servant to test for poison.

Orel (also “Oryol”) is a city lying on the Oka River, just over 200 miles SSW of Moscow. Orel was one of the cities occupied by Germany during WWII. It was liberated in 1943, but had been almost completely destroyed.

“This Film Is Not Yet Rated” is a fascinating 2006 documentary film about the rating system used by the Motion Picture Association of America (MPAA). The film is largely critical of the MPAA rating system, and makes some pretty good arguments, in my humble opinion …

The words “slip” and “slide” start with letters S (esses).

The Chrysler Building in Manhattan is a magnificent Art Deco structure that was opened in 1930. Standing at over 1,000 feet tall, it was the tallest building in the world for almost a year, until the Empire State Building was completed in 1931. The building was constructed for use of the Chrysler Corporation, but the company never owned it. The car manufacturer’s founder decided to pay for the Chrysler Building out if his personal wealth, so that he could pass it on to his children.

47. Enjoying the Smithsonian, briefly : IN DC

The Pittsburgh Pirates (nicknamed the Bucs or Buccos) joined baseball’s National League in 1887 just six years after the league was formed. The Pirates played in the first ever World Series in 1903, and won their first World Series in 1909.

US Route 101 runs in the north-south direction along the west coast of the country, through California, Oregon and Washington. US 101 is an important thoroughfare here in the San Francisco Bay Area, but along most of its length, traffic tends to use the parallel Interstate 5.

In competitive fencing, a parry is a maneuver that blocks an attack by an opponent. There are actually nine defined ways to execute a parry.

My favorite would probably be Ben and Jerry …

“The Canterbury Tales” is a collection of stories penned by Geoffrey Chaucer at the end of the 14th century. Written in MIddle English, the tales are presented as a storytelling contest held by a group of pilgrims as they travel from London to the shrine of Saint Thomas Becket in Canterbury Cathedral. “The Canterbury Tales” is often cited as a landmark piece of English literature as it popularized the use of vernacular English, as opposed to the French or Latin works that were commonly published up to that time.

The famous line “Toto, I’ve a feeling we’re not in Kansas anymore.” from 1939’s “The Wizard of Oz” was ranked no. 5 in a list of top movie quotes compiled by “The Hollywood Reporter”. The top of the list makes interesting reading, with the following comprising the top five:

The standard poodle breed of dog is considered to be the second most intelligent breed, after the border collie. The name “poodle” comes from a Low German word meaning “to splash about”, reflecting the original use of the breed as a water retriever.

37. Garment in a Gilbert and Sullivan title : PINAFORE

“H.M.S. Pinafore” is one of my favorite of the Gilbert & Sullivan comic operas (a production we staged at high school, many moons ago). “Pinafore” was one of the first big hits for Gilbert & Sullivan (in their native Britain, and in America), and they followed it up with “The Pirates of Penzance” and “The Mikado”.

In the world of music, syncopation is the expected emphasis away from the normally accented beat, producing an unexpected rhythm, an “offbeat” rhythm. Syncopation is a characteristic of many genres of music, notably ragtime and jazz.

In the Hindu tradition, Shakti is the cosmic energy that pervades the entire universe. Shakti is sometimes referred to as “the Great Divine Mother”.