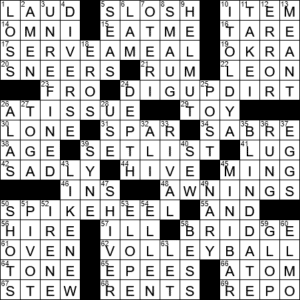 Our word “kudos” means “acclaim given for an exceptional achievement”. “Kudos” is both a singular and plural noun, and comes from the Greek “kyddos” meaning “glory, fame”.

Rum was first distilled by slaves on the sugarcane plantations of the Caribbean in the 1800s, with the tradition being that the very first production came from Barbados.

The stiletto knife was developed in Italy, and is a knife intended for thrusting and stabbing as opposed to slashing and cutting. The term “stiletto” comes from the Latin “stilus”, which was a thin pointed writing instrument used in ancient Rome to engrave wax or clay tablets. And, there are also stiletto heels on some women’s shoes, heels that are long and thin.

62 Sport that involves the moves that start the answers to starred clues : VOLLEYBALL

39 Last word in the first song of the year : SYNE

A suture is used to close an open wound. The term “suture” comes from the Latin word “suere” meaning “to sew”, the past participle of which is “sutus”.