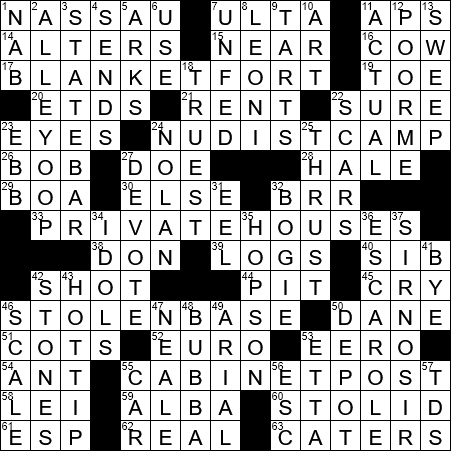 Themed answers each end with a location where a military PRIVATE might be HOUSED:

1. Largest city in the Bahamas : NASSAU

Nassau is the capital of the Bahamas, and used to be called Charles Town. Located on the island of New Providence, the original settlement was burnt to the ground by the Spanish in 1684. It was rebuilt and named Nassau in honor of King William III of England (“William of Orange”), a Dutchman from the House of Orange-Nassau. Nassau is a favored location for the James Bond series of movies. The city and surroundings feature in “Thunderball”, “Never Say Never Again”, “Casino Royale” and “For Your Eyes Only”. Bond portrayer Sean Connery has lived for many years at Lyford Cay, which is just a 30-min drive from the center of Nassau.

7. Beauty chain with a salon inside each store : ULTA

We took our word “pirouette” directly from French, in which language it has the same meaning, i.e. a rotation in dancing. “Pirouette” is also the French word for “spinning top”.

Despite all Bob Dole’s success in the world of politics, he is remembered by many as the VP candidate who lost to Walter Mondale (and Jimmy Carter) and the presidential candidate who lost to incumbent Bill Clinton. The man is a true war hero. He joined up in 1942 and fought with the Army’s 10th Mountain Division in Italy. In 1945 he was hit by machine gun fire in his right arm and back Dole was so badly injured that his comrades could only dose him up with morphine, write “M” on his forehead with his own blood (so that another, fatal dose of morphine would not be administered) and continue fighting the battle. Dole had to wait nine hours to be evacuated from the battlefield, and wait another three years before being discharged from hospital back in the States.

Both the words “hale” and “healthy” derive from the Old English “hal” meaning healthy.

Victor Borge was such a talented Danish entertainer. He was nicknamed “The Great Dane” as well as “The Clown Prince of Denmark”. Borge was a trained concert pianist, but soon discovered that the addition of a stand up comedy routine to his musical presentations brought him a lot of work. He toured Europe in the 1930s, and found himself in trouble for telling anti-Nazi jokes, so when Germany occupied Denmark during WWII Borge escaped to America.

Cyprus is an island nation in the Mediterranean Sea, a member of the European Union. Cyprus is a divided island, with the Republic of Cyprus controlling about 60% of its area. The remaining 40% calls itself the Turkish Republic of Northern Cyprus, and is occupied by Turkish forces.

Eero Saarinen was a Finnish-American architect who was renowned in this country for his unique designs for public buildings such as Gateway Arch in St. Louis, Dulles International Airport Terminal, and the TWA building at JFK. The list of his lesser-known, but still impressive, works includes several buildings erected on academic campuses. For example, the Chapel and Kresge Auditorium on the MIT campus, the Emma Hartman Noyes House at Vassar College, the Law School building at the University of Chicago, and Yale’s David S. Ingalls Rink.

In the Westminster system, the Cabinet is a group of sitting politicians chosen by the Prime Minister to head up government departments and also to participate collectively in major governmental decisions in all areas. In the US system, the Cabinet is made up not of sitting politicians, but rather of non-legislative individuals who are considered to have expertise in a particular area. The Cabinet members in the US system tend to have more of an advisory role outside of their own departments.

An alley-oop is a play in basketball in which one player lobs the ball close to the basket for a teammate who usually scores with a slam dunk.

The Torah ark is found in a synagogue, and is the ornamental container in which are stored the Torah scrolls. The word “Torah” best translates as “teaching”, I am told.

Téa Leoni is an American actress. One of Leoni’s early parts was in the great film “A League of Their Own” (a minor role, Racine at first base). She also played the fiancée of Sam Malone from “Cheers” on the spin-off sitcom “Frasier”. A leading role on the big screen was opposite Adam Sandler in “Spanglish”. My favorite of her more prominent movie roles was as Jane in “Fun with Dick and Jane”. Leoni started playing the title role in the drama series “Madam Secretary” in 2014, and that’s a show I quite enjoy …

Nolan Ryan is famous for having more career strikeouts that any other baseball pitcher. However, he also holds the record for the most career walks and wild pitches. Another record that Ryan holds is the most no-hitters, a total of seven over his career.

Humphrey “Bogie” Bogart’s breakthrough movie was “The Petrified Forest” from 1936, but for me nothing beats “Casablanca”. That said, check out the original “Sabrina” from 1954. It’s a real delight. Bogie was nominated three times for a Best Actor Oscar, but only won once: for “The African Queen”.

What a bombshell Lauren Bacall was, with that husky voice and her quiet, suggestive manner. Bacall was born in New York City to Jewish immigrant parents from Europe. She was actually a first cousin of Shimon Peres, the former President and Prime Minister of Israel. Famously, Bacall was married to Humphrey Bogart, from 1945 until his passing in 1957.

Endive is a leaf vegetable belonging to the chicory genus, and is in the daisy family. Endive is also known as “escarole”.

Sticks and stones may break my bones
But words will never hurt me.

Etta Jones was a jazz singer, sometimes known as the “jazz musician’s jazz singer”. Because she has a similar name to Etta James, Jones was often confused with the more popular singer. Jones never really had any huge commercial success though, despite the respect that she engendered within the inner sanctums of the jazz world.

On many computer keyboards, the escape key (Esc) is located beside the first function key (F1).