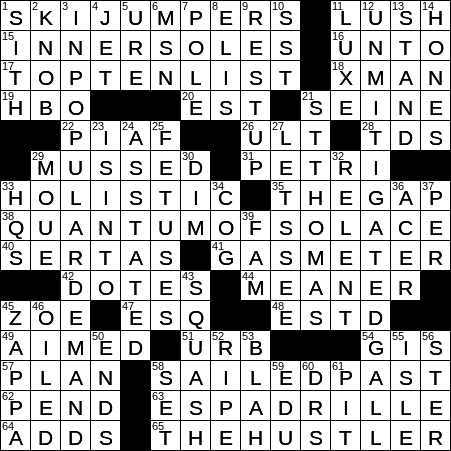 In the Marvel Comics universe, Wolverine is a mutant with keen animal-like senses and an ability to regenerate body parts after injury. He usually appears as a member of the X-Men superhero team. On the big screen, Wolverine is played regularly by Australian actor Hugh Jackman.

Erhard Seminars Training (est) was a 60-hour course designed to improve one’s ability to cope with life and find new fulfilment. The est training was popular throughout the seventies and into the mid-eighties. The training was developed by Werner Erhard from Philadelphia, and Erhard was able to attract some celebrity participants including Cher, Joe Namath, Yoko Ono, John Denver and Diana Ross.

“La Môme Piaf” (the Little Sparrow) was the nickname of France’s most famous singer, Édith Piaf. What a voice this woman had, and what gorgeous ballads she sang. Édith Piaf lived a life that was not without controversy. She was raised by her mother in a brothel in Normandy, and had a pimp as a boyfriend in her teens. She had one child, while very young, born illegitimately and who died at 2-years-old from meningitis. Her singing career started when she was discovered in the Pigalle area of Paris by nightclub owner Louis Leplée. Leplée was murdered soon after, and Piaf was accused of being an accessory to the murder but was later acquitted. During World War II she was branded a traitor by many as she frequently performed for the German occupying forces, although there are other reports of her supporting the resistance movement. Later in her life she was seriously injured in no less than three, near-fatal car accidents, including one with her friend, Charles Aznavour. While recovering from her injuries she became addicted to pain medication, an addiction that lasted for the rest of her life. When she died in 1963 she was denied a Catholic funeral mass because of her lifestyle, but the crowds that turned out for her funeral procession managed to stop all traffic in Paris, the only time that has happened since the end of WWII.

In French, “une chanteuse” (a female singer) might sing of “amour” (love).

28. Equivalents of pairs of FGs : TDS

Julius Richard Petri was a German bacteriologist and was the man after whom the Petri dish is named. The petri dish can have an agar gel on the bottom which acts a nutrient source for the specimen being grown and studied, in which case the dish plus agar is referred to as an “agar plate”.

A holistic approach to medicine emphasises not only physical symptoms but also social considerations and the environment.

38. Second film with Craig as Bond : QUANTUM OF SOLACE

English actor Daniel Craig rocketed to fame in 2005 when he was chosen to replace Pierce Brosnan as James Bond in the series of films based on Ian Fleming’s character. One of Craig’s most famous appearances as Bond was alongside Queen Elizabeth II in the opening ceremony of the London 2012 Olympics. Craig married actress Rachel Weisz in 2011.

American actress Zoë Saldana played the Na’vi princess in “Avatar”, and Uhura in the 2009 movie “Star Trek” (and sequels). Saldana seems to pick the right movies, as she is the only actress to have three different films in the top twenty at the box office for three consecutive weeks (“Avatar”, “The Losers” and “Death at a Funeral”).

The initials “GI” stand for “Government Issue”, and not “General Infantry” as is widely believed. “GI” was first used in the military to denote equipment made from Galvanized Iron and during WWI, incoming German shells were nicknamed “GI cans”. Soon after, the term GI came to be associated with “Government Issue” and eventually became an adjective to describe anything associated with the Army.

63. Shoe with a rope sole : ESPADRILLE

“The Hustler” is a 1961 movie about the dark side of game of pool that is an adaptation of a novel of the same name by Walter Tevis. Paul Newman stars as small-time hustler Fast Eddie Felson, and Jackie Gleason as legendary player Minnesota Fats. Famously, Newman reprised the role of Fast Eddie in the 1986 film “The Color of Money”, for which he won his a Best Actor Oscar.

Midge Ure is a musician from Scotland who has worked with a number of famous bands and was the lead singer for Ultravox. He was the lesser-known name (along with Bob Geldof) behind the incredible Band Aid, Live Aid and Live 8 concerts. Ure also co-wrote the hit charity single “Do They Know It’s Christmas?”

Laura Nyro was a singer-songwriter from the Bronx, New York. Nyro had success with her own recordings, but her songs were even more successful when recorded by other big names. Two of Nyro’s compositions were “Eli’s Coming” recorded by Three Dog Night, and “Stoney End” by Barbra Streisand.

The US Virgin Islands (USVI) are located in the Caribbean, and are part of the Virgin Islands archipelago. The three largest islands of the US territory are Saint Croix, Saint John and Saint Thomas. The island chain was named by Christopher Columbus in 1493 in honor of Saint Ursula and her virgin followers. The United States bought the islands from Denmark during WWI in a move designed to thwart plans by Germany to use them as a submarine base.

Computer manufacturer Acer has a line of ultra-portable laptops that are remarkably thin, and which are sold under the “Swift” label.

Frank Zappa was an American composer and guitarist. He was a solo artist as well as the founding member of the rock band Mothers of Invention. You might like to meet his four children: Moon Unit, Dweezil, Ahmet Emuukha Rodan, and Diva Thin Muffin Pigeen.

Loyola University in Chicago was founded in 1870 by the Society of Jesus, originally as St. Ignatius College. It is now the largest Jesuit school in the whole country.

One might find a medical doctor (MD) in an operating room (OR).