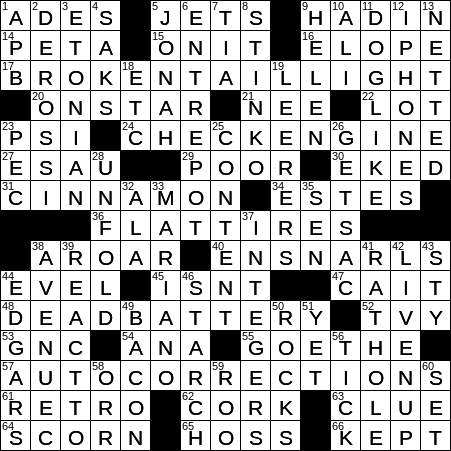 Themed answers are CORRECTIONS that need to be made before driving an AUTO. And, there are typos in the first word of each themed clue that also need to be AUTO-CORRECTED:

Jacuzzi is one of those brand names that has become so much associated with the product that it is often assumed to be a generic term. The Jacuzzi company was founded in 1915 by the seven(!) Jacuzzi brothers in Berkeley California. The brothers, who were Italian immigrants, pronounced their name “ja-coot-si”, as one might suspect when one realizes the name is of Italian origin. The company started off by making aircraft propellers and then small aircraft, but suspended aircraft production in 1925 when one the brothers was killed in one of their planes. The family then started making hydraulic pumps, and in 1948 developed a submersible bathtub pump so that a son of one of the brothers could enjoy hydrotherapy for his rheumatoid arthritis. The “hydrotherapy product” took off in the fifties with some astute marketing towards “worn-out housewives” and the use of celebrity spokesman Jack Benny.

The OnStar system was developed as a joint venture between GM, EDS and Hughes. The product itself was launched in 1996. Today, OnStar is only available on GM cars, although it used to be offered on other makes of car through a licensing agreement. OnStar is a subscription service that packages vehicle security, telephone, satellite navigation and remote diagnostics.

Edom was an ancient Iron Age kingdom located in the south of modern-day Jordan. The area is known for its red-colored sandstone, which gave the kingdom its name. According to the Bible, the Edomites were the descendants of Esau. “Edom” translates from Hebrew as “red”, and was the name given to Esau when he ate the “red pottage”.

“I Am Cait” is a documentary series that follows Caitlyn Jenner after she changed her gender and identification from Bruce Jenner.

Caitlyn Jenner is a former Olympic gold medalist in the decathlon. Caitlyn competed as Bruce Jenner, and made an official gender change in September 2015. Bruce was married for 23 years to Kris Kardashian, the mother of the TV personality Kim Kardashian.

Johann Wolfgang von Goethe was a German writer (among many other things!). Goethe’s most famous work is probably his play “Faust”. This epic work was published in parts, starting in 1808. The work was only published in toto after his death in 1832.

Faust is a character from a classic German legend who makes a pact with the devil. He agrees to exchange his soul for worldly gratification and unlimited knowledge.

Portia de Rossi is an actress from Australia who played Nellie Porter on “Ally McBeal” and Lindsay Bluth/Fünke on “Arrested Development”. Off the screen, de Rossi is famous as the wife of Ellen DeGeneres, whom she married in 2008.

An entrepôt is a port or trading post in which goods are imported, stored and then exported. Entrepôts were established in times past when it took lots of time and effort to ship good over long differences. Many smaller traders were happy to sell goods to an intermediary at an entrepôt at a discounted price, rather than put in the place the infrastructure necessary to transport to the end user. The intermediary was happy to buy the goods and sell on to another trader who could complete the shipping process.

9. Launcher of many ships? : HELEN

Kamala Harris has been a US Senator for California since 2017, after serving for six years as the Attorney General of California. Harris is regularly cited as a leading contender for the 2020 Democratic nomination for US president.

An integer is a number that does not include a fraction. The word “integer” is Latin for “whole”.

Avenues A, B, C and D are the only avenues in Manhattan to have single letter names. The area bounded by Avenues A and D, 14th Street and Houston Street in the East Village is known as Alphabet City, a reference to those single-letter avenues. The “Alphabet City” moniker emerged in the 1980s.