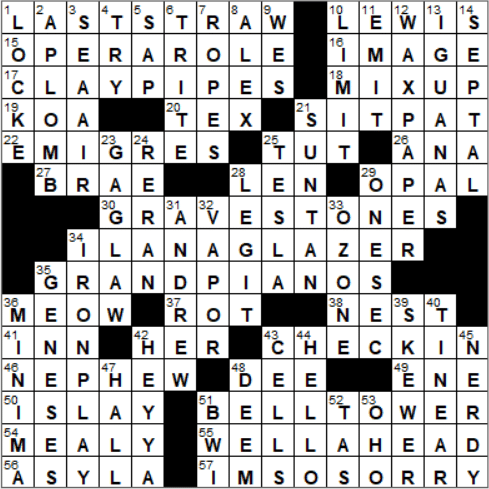 Irishman C. S. Lewis moved to Britain after serving in the British Army in WWI. A man of many achievements, Lewis is perhaps best remembered for his series of novels for children called “The Chronicles of Narnia” (which includes “The Lion, the Witch and the Wardrobe”). He also wrote the “The Four Loves”, a nonfiction work exploring the nature of love from a Christian perspective. Famously, Lewis died on November 22nd, 1963, the same day that President John F. Kennedy was assassinated.

“The Screwtape Letters” is a 1942 epistolary novel by Belfast-born novelist C. S. Lewis. The book is steeped in Christian imagery and takes the form of a devilish uncle (Screwtape) mentoring his nephew (Wormwood) on the ins and outs of temptation.

John Adams is a composer now based in California. Adams gained prominence with his 1987 opera “Nixon in China”. His works are usually described as in the minimalist genre. I had the privilege of hearing a work of his called “Absolute Jest” not that long ago, in the presence of the composer.

All Nippon Airways (ANA) is a Japanese airline, one that is now larger in size that the nation’s flag carrier Japan Airlines (JAL).

The ANA Inspiration is one of the five major championships of women’s professional golf. The tournament was co-founded in 1972 by entertainer Dinah Shore, and is still sometimes referred to as “the Dinah Shore”.

2003’s “Her” is a rather unusual film. It stars Joaquin Phoenix as a man who develops a relationship with a computer operating system called “Samantha”, which is voiced by Scarlett Johansson.

Spike Jonze is a movie director whose first feature film was “Being John Malkovich” (1999). Jonze also directed a couple of films for which he wrote the screenplays, namely “Where the Wild things Are” (2009) and “Her” (2013). Jonze also co-created the MTV show “Jackass”. Can’t stand that show, said he grumpily …

43. It often involves getting a card nowadays : CHECK-IN

That would a key card handed over at a hotel check-in.

Deandra “Sweet Dee” Reynolds is a character played by Kaitlin Olson on the sitcom “It’s Always Sunny in Philadelphia”.

“It’s Always Sunny in Philadelphia” is a long-running sitcom that premiered in 2005 and that is set in an Irish bar in South Philly. The show has a talented lineup of actors, but the big name in the cast is Danny DeVito.

Lansing, Michigan is unique among US state capitals in that it is not a county seat, even though it is located in Ingham County. The Ingham County seat is Mason, Michigan.

50. Southernmost of the Inner Hebrides : ISLAY

Islay is the most southerly of the islands in the Inner Hebrides on the west coast of Scotland. There are about 30,000 people living on Islay, with about a quarter of that population speaking Scottish Gaelic.

John Locke was the English philosopher who postulated that the mind is a blank slate (or “tabula rasa”) when we are born, and that we fill that slate with our experiences and observations.

“A Clockwork Orange” is a novella by Anthony Burgess, first published in 1962. The story is about a young teenager named Alex, who leads a small gang on violent rampages each night. The story has been adapted for the big and small screens, most famously in a 1971 film by Stanley Kubrick. It’s way too violent for me …

14. Of a dividing membrane : SEPTAL

Like many of the earlier US presidents, Andrew Jackson was a career military man. Jackson distinguished himself as commander of American forces during the War of 1812, particularly in the defense of New Orleans. He had a reputation of being fair to his troops, but strict. It was during this time that he was described as “tough as old hickory”, giving rise to the nickname “Old Hickory” that stuck with him for life.

Andrew Johnson was the 17th President of the US, the man who came to power after the assassination of President Lincoln. As well as being Lincoln’s successor, Johnson is remembered as the first sitting president to be impeached. Johnson fell foul of the so-called “Radical Republicans” due to his efforts to quickly incorporate the southern states back into the Union. His political opponents chose the Tenure of Office Act as their “weapon” for impeachment. The Act prevented a president from removing an appointee of a past-president without the consent of the Senate. Johnson had removed the sitting Secretary of War without consulting Congress creating the opportunity for an impeachment trial in Congress. He was acquitted though, as his opponents fell one vote shy of the majority needed. The impeachment of President Johnson was the only presidential impeachment until that of President Clinton in 1999.

Ozone gets its name from the Greek word “ozein” meaning “to smell”. It was given this name as ozone’s formation during lightning storms was detected by the gas’s distinctive smell. Famously, there is a relatively high concentration of the gas in the “ozone layer” in the Earth’s stratosphere. This ozone layer provides a vital function for animal life on the planet as it absorbs most of the sun’s UV radiation. A molecule of ozone is made up of three oxygen atoms, whereas a “normal” oxygen has just two atoms

“Genesis” is a Greek word meaning “origin, creation” that was absorbed into Latin, and then into English. We use the Latin plural “geneses”.

“Hey Ya!” is a 2003 song hip hop duo Outkast. I took a look at the song’s official music video, as I read that it was inspired by the 1964 appearance of the Beatles on “The Ed Sullivan Show”. I enjoyed the video, although I must admit that I watched it with the sound turned down …