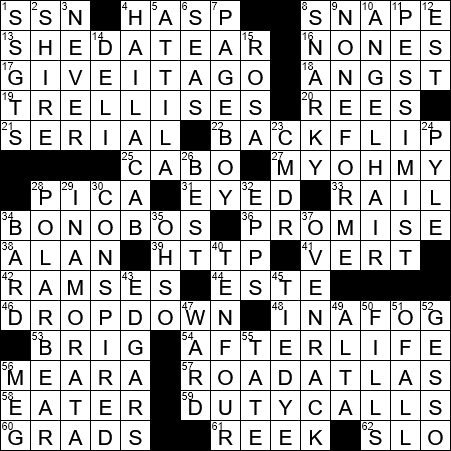 Severus Snape is a character in the Harry Potter novels, played by the wonderful Alan Rickman on the big screen.

In the Roman Catholic tradition, there is an official set of daily prayers known as the Liturgy of the Hours. The traditional list of prayers is:

The genus of flowering plant known as clematis is in the buttercup family. The name of the genus comes from an Ancient Greek word for “a climbing plant”.

Alan Rickman was a marvelous English actor, famous for playing bad guy Hans Gruber in the original “Die Hard” film, Severus Snape in the “Harry Potter” series and my personal favorite, Eamon de Valera in “Michael Collins”. Sadly, Rickman passed away in January 2016, after which fans created a memorial under the “Platform 9¾” sign in London’s Kings Cross Railway Station, from where the Hogwarts Express is said to depart in the “Harry Potter” universe.

Grenoble is a city at the foot of the French Alps. Grenoble hosted the 1968 Winter Olympic Games.

42. Many an Egyptian pharaoh : RAMSES

Ramesses (also “Ramses”) was the name taken by eleven of the Egyptian pharaohs. “Ramesses” translates as “Born of the sun-god Ra”.

A brig is a two-masted sailing vessel, with the name “brig” coming from the related vessel known as a brigantine. Brigs and brigantines are both two-masted, but there is a difference in the sails used. It was the use of retired brigs as prison ships that led to use of “brig” as the word for a jail or prison cell on a seagoing vessel.

“Sea dog” and “salt” are familiar terms for a sailor, especially one that has lots of experience.

Rand McNally is a company long associated with the city of Chicago. Its roots go back to 1856 when William Rand opened a printing shop in the city. Two years later he hired an Irish immigrant named Andrew McNally and the pair turned to printing tickets and timetables for the railroad industry. They diversified into “railroad guides” in 1870, including the first Rand McNally map in the December 1872 edition. When automobile travel started to become significant, Rand and McNally turned their attention to roads and they published their first road map in 1904, a map of New York City. Rand and McNally popularized the use of highway numbers, and indeed erected many roadside highway signs themselves, long before the state and federal authorities adopted the idea.

4. How to get to Carnegie Hall, perhaps : HAIL A CAB

Capellini is a pasta that is like a thin spaghetti. An even thinner version of the pasta is known as “capelli d’angelo”, which translates as “angel hair”.

“Farfalle” is commonly referred to as “bow-tie pasta” because of its shape. The name comes from the Italian “farfalla” meaning “butterfly”.

Eeyore is the donkey character in A. A. Milne’s “Winnie-the-Pooh”. Eeyore is very lovable, but has a gloomy and pessimistic outlook on life.

“Inamorata” is an Italian term that we’ve imported into English. It describes a female lover. An “innamorato” is a male lover.

Omar Epps is the actor who played Eric Forman on the excellent television series “House”. Prior to playing Dr. Forman, Epps had a recurring role playing Dr. Dennis Gant on “ER”. And, in another link to the world of medicine, Epps was born in Savannah, Georgia to single mom, Dr. Bonnie Epps.

Viking Range is a manufacturer of kitchen appliances that was founded in 1987 and is based in Greenwood, Mississippi.

There is a set of “ten-codes” that were developed in 1937 for the use of law enforcement departments. As of 2006, the US federal government is recommending that they be replaced by plain language due to a lack of standardization in ten-codes. Examples of ten-codes are:

The Ellery Queen series of detective novels was somewhat unique in that Ellery Queen was the hero of the tales, and was also the pen name of the author. Actually, the “author” was a pair of writers; two cousins from Brooklyn, New York.

“Gesso” is the Italian word for “chalk” and gives its name to the powdered calcium carbonate that is used as a primer coat under artistic panel paintings. The gesso is mixed with a glue and applied to wood so that it acts as an absorbent surface for paint.

The museum known as “the Tate” is actually made up of four separate galleries in England. The original Tate gallery was founded by Sir Henry Tate as the National Gallery of British Art. It is located on Millbank in London, on the site of the old Millbank Prison, and is now called Tate Britain. There is also the Tate Liverpool in the north of England located in an old warehouse, and the Tate St. Ives in the west country located in an old gas works. My favorite of the Tate galleries is the Tate Modern which lies on the banks of the Thames in London. It’s a beautiful building, a converted power station that you have to see to believe.