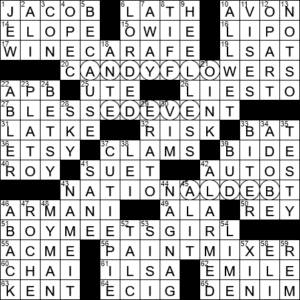 Themed answers each include a BOY’s name and a GIRL’s name as hidden words, side-by-side:

Bats do eat mosquitoes, although they prefer to go after moths and beetles. A friend of mine built a bat house in his yard, in the hope that attracting bats would suppress the mosquito population. Well, that hasn’t worked. My experience is that moving air with fans prevents mosquitoes from landing on you …

Roy Orbison had to be one the sickliest looking performers I’ve ever seen. Orbison had a very sallow complexion, pock-marked from teenage acne. The yellowish skin tone came from a severe bout of jaundice as a child. Perhaps poor nutrition affected him and his siblings, because all of them had very poor eyesight, with Roy almost blind and wearing very thick lenses from a very young age. He was also very ashamed of his head of hair, which was almost a ghostly white, and so he dyed it jet black even when he was young. Despite all this, he was immensely popular in his heyday with teenage girls, particularly in Canada and Ireland for some reason. On a tour of Ireland in 1963, the Irish police had to stop one of his performances in order to pull a bevy of local lasses off poor Mr. Orbison …

43 Government bonds are part of it : NATIONAL DEBT (hiding “AL/DEB”)

“Big Eyes” is a 2014 movie about the artist Margaret Keane (played by Amy Adams). Margaret’s husband Walter Keane (played by Christoph Waltz) fraudulently claimed that it was him who actually created the paintings. The title “Big Eyes” refers to the exaggerated size of the eyes of the subjects in Keane’s paintings. The movie’s title song was co-written and performed by Lana Del Rey.

The spice known as cardamom comes from the seeds of several plants that are native to India. Those plants were introduced to Guatemala in the early 20th century, and now Guatemala produces and exports more cardamom than any other country in the world, even India. Cardamom is the third-priciest spice on the market today by weight, after vanilla and saffron.

To hornswoggle is to cheat, to deceive, to bamboozle.

To “lord” it over is to act as though one is better that someone, to act like a “lord”.

Gravity wedges are a relatively new style of woman’s shoe. It’s a wedge, without a heel. To me, they look bizarre, uncomfortable, and dangerous …

23 “Allegory of the cave” philosopher : PLATO

Plato’s “Allegory of the Cave” appears in his Socratic dialogue titled “Republic”. He uses the allegory to make the point that some people can be comfortable in their ignorance, and become hostile towards someone who tries to educate them, to make them aware of their ignorance.

Betsy Brandt is an actress best known for playing Marie Schrader on “Breaking Bad”. Brandt has two children, the second of which was born while the second season of “Breaking Bad” was being filmed.

“Vim” and “pep” are both words that mean “energy, power”.

The building material known as adobe has been around a long time, and has been used in dry climates all over the world. The original form of the word “adobe” dates back to Middle Egyptian times, about 2000 BC. The original spelling is “dj-b-t”, and translates as mud (sun-dried) brick.

The plumeria genus of plants has the common name “frangipani”. The genus is named after French botanist Charles Plumier. The common name comes from an Italian noble family with roots in ancient Rome. Various species of plumeria are commonly used for making leis in several Pacific islands.

The crime of burglary is the breaking into and entering of a building with the intent to steal. The actual theft itself is a separate crime.

Tamiflu is a brand name for the antiviral medication oseltamivir.

A mojito is a Cuban cocktail, although the exact origins appear to be unclear, as does the derivation of the name. Want one? Put 4 mint leaves in a glass, and add the juice of half a lime and a teaspoon of powdered sugar. Muddle the ingredients, smashing them together with a muddler or a spoon. Add some crushed ice, two ounces of white rum and stir. Top with a couple of ounces of club soda, and garnish with a sprig of mint and/or a slice of lime. Cheers!