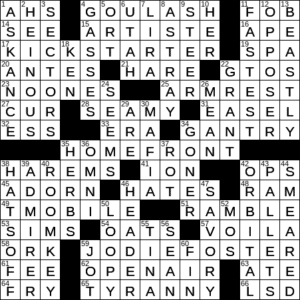 Themed answers each ends with a word that can FRONT “HOME”:

Goulash is a soup or stew that is seasoned with spices, especially paprika. It is a national dish of Hungary, and the term “goulash” comes from the Hungarian word “gulyás”, which actually translates as “herdsman”. The original goulash was a meat dish prepared by herdsmen.

Kickstarter.com is an increasingly popular crowdfunding website. Kickstarter is a contemporary version of the traditional model in which artists sought out patrons from among their audiences to fund their work. The website brings together individuals willing to fund projects, usually in exchange for some reward from the artist.

Sinclair Lewis was an American novelist and playwright. Lewis was the first US writer to be awarded the Nobel Prize in Literature, which he won in 1930.

“Harem” is a Turkish word derived from the Arabic for “forbidden place”. Traditionally, a harem was the female quarters in a household in which a man had more than one wife. Not only wives (and concubines) would use the harem, but also young children and other female relatives. The main point was that no men were allowed in the area. The term “harem” is also applied to the women, children and staff occupying the quarters.

The wonderful actress and director Jodie Foster got her big break in movies early in her life, playing a very young prostitute in Martin Scorsese’s 1976 film “Taxi Driver”. Sadly, her appearance in “Taxi Driver” led to her being stalked by an obsessed John Hinckley, Jr. Hinckley called Foster on the phone, sent her love letters, and followed her on campus while she was attending Yale. In 1981, Hinckley famously shot and wounded President Reagan, claiming that he believed an assassination of the President would impress Foster.

“The Silence of the Lambs” is a 1991 psychological drama based on a novel of the same name by Thomas Harris. Jodie Foster plays FBI trainee Clarice Starling, and Anthony Hopkins plays the creepy cannibalistic serial killer Hannibal Lecter. “The Silence of the Lambs” swept the Big Five Oscars (Best Picture, Best Director, Best Actor, Best Actress and Best Screenplay) for that year, being only the third movie ever to do so. The other two so honored were “It Happened One Night” (1934) and “One Flew Over the Cuckoo’s Nest” (1975).

Our word “bazaar”, meaning “market”, comes from the Persian “bazar” that means the same thing.

Timothy Leary was a psychologist and writer, an icon of the sixties counterculture and a promoter of the use of LSD. Leary popularized the phrase “Turn On, Tune In, Drop Out” in the sixties. After he died, some of Leary’s ashes were “buried” in space, launched aboard a rocket that contained the ashes of 24 other people including “Star Trek” creator Gene Roddenberry.

A sector is part of a circle that is bounded by two radii and an arc of the circumference. The term “sector” comes from the Latin “secare” meaning “to cut”, so a “sector” is a piece “cut” from a circle.

The element oxygen has an atomic number of 8, and has eight electrons within each atom. The name “oxygen” was coined (“oxygène” in French) by Antoine-Laurent Lavoisier, from the Greek “oxys” meaning “acid” and the French “-gène” meaning “producer”. It was originally believed that oxygen was needed to make all acids.

US President Ulysses S. Grant was born Hiram Ulysses Grant. Ohio Congressman Thomas Hamer nominated a young Grant to attend West Point, and gave the candidate’s name as “Ulysses S. Grant” in error. Grant tried to fix the error while studying at the military academy, but bureaucracy won out and the future president eventually embraced the inaccurate name as his own.

The Dodge Omni is basically the same car as the Plymouth Horizon, and was produced by Chrysler from 1978-90. The Omni is a front-wheel drive hatchback, the first in a long line of front-wheel drive cars that were very successful for Chrysler. The Omni was actually developed in France, by Chrysler’s Simca division. When production was stopped in the US in 1990, the tooling was sold to an Indian company that continued production for the Asian market for several years.

One doffs one’s hat, usually as a mark of respect. To doff is to take off, with “doff” being a contraction of “do off”. The opposite of “doff” is “don”, meaning “to put on”.

In soccer, a header is a pass or shot on goal made by heading the ball, by hitting and directing the ball with the head.