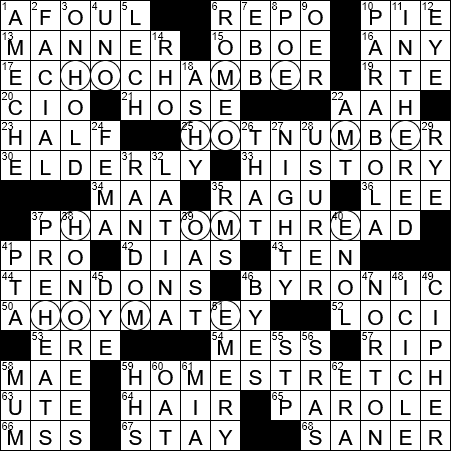 Themed answers each include the letters H-O-M-E STRETCHED throughout:

“Donovan” is the stage name of Scottish folk and pop singer Donovan Leitch. One of his more famous recordings on this side of the pond is 1966’s “Mellow Yellow”.

The Ragú brand of pasta sauce is owned by Unilever. The name ” Ragù” is the Italian word for a sauce used to dress pasta, however the spelling is a little off. In Italian, the word is “Ragù” with a grave accent over the “u”, but if you look at a jar of the sauce on the supermarket shelf it is spelled “Ragú” on the label, with an acute accent. Sometimes I think we just don’t try …

“Phantom Thread” is a 2017 period drama about the world of high fashion in London in the 1950s. The film’s star is Daniel Day-Lewis, in his last performance before retiring from acting.

In the UK, the Prime Minister’s residence at 10 Downing Street in London is most usually referred to as “Number 10”. The building is really quite large, with three floors (and a basement kitchen) and has about one hundred rooms. The top floor is the private residence of the Prime Minister and his or her family. Number 10 is large, as it was originally three houses. The structure was remodeled into a residence for Prime Minister Sir Robert Walpole in 1732, as a gift from King George II.

46 Like moody Romantic heroes, as first described in the works of a British lord : BYRONIC

Don Ameche was such a gentleman. He starred in the fun movie “Trading Places” in 1983, and was required to use the “f-word” in the script. According to co-star Jamie Lee Curtis, Ameche went around the set before the scene was shot, and apologized in advance to everyone for having to use bad language.

A parabola is roughly a u-shape curve. Parabolic mirrors have cross-sections that are parabolic curves. Such mirrors have the characteristic that light emanating from the parabolas focal point leaves the mirror as a parallel beam, a collimated beam.

11 Losing money, colorfully : IN THE RED

Puerto Rican singer, dancer and actress Rita Moreno is one of the few performers to have won an Oscar, Emmy, Grammy and Tony. Moreno got her big break, and won her Oscar, for playing Anita in the 1961 screen adaptation of “West Side Story”. And, she was awarded the Presidential Medal of Freedom by President George W. Bush in 2004.

Mia Hamm is a retired American soccer player. She played as a forward on the US national team that won the FIFA Women’s World Cup in 1991. Hamm scored 158 international goals, more than any other player in the world, male or female. Amazingly, Hamm was born with a clubfoot, and so had to wear corrective shoes when she was growing up.