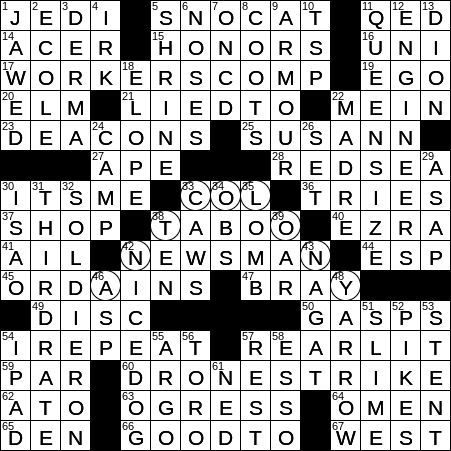 Letters circled in the grid spell out ANT COLONY, and are arranged to represent an ant hill. Themed answers each start with a type of ANT:

14 Laptop brand that sounds like a top tennis player : ACER

A unicorn is a mythical creature that resembles a horse with a horn projecting from its forehead. The term “unicorn” comes from the Latin “uni-” (one) and “cornus” (horn).

(32D *Persist despite difficulty : SOLDIER ON (giving “soldier ant”))
In general terms, workers’ compensation is a form of insurance that pays out in the event that a worker gets injured in the course of employment.

Jacqueline Susann was a writer and actress. Her most famous written work is the 1966 novel “Valley of the Dolls”, which has been a huge commercial success. Her next two books were “The Love Machine” and “Once is Not Enough”, both of which also became #1 novels on “The New York Times” Best Seller List. In fact, Susann became the first author to have three consecutive novels that top that coveted list.

Jacqueline Susann’s novel “Valley of the Dolls” was first published in 1996 and was a runaway success. The word “dolls” in the title is slang for “barbiturate drugs”, so-called “downers” or sleep aids. The book was adapted into a film that was nominated for a number of Oscars.

Koko is a female Lowland Gorilla that lives in Woodside, California. Researcher Penny Patterson taught Koko to speak a modified form of American Sign Language (ASL) that she called Gorilla Sign Language. Koko can apparently use over a thousand signs.

Drone bees and drone ants are fertile males of the species, whose sole role in life seems to be to mate with a queen.

63 Shrek’s kiss made Fiona one for good : OGRESS

“Armour” is a brand of canned meat that was introduced in the 1860s. In the early days, the Armour brand name was associated with almost every consumer product made from the output of a slaughterhouse, e.g. glue, fertilizer, oleomargarine, and even hairbrushes and buttons.

46 Symbolic Egyptian snake, which includes the start of a hint to the answers to starred clues : ASP

Peter Yarrow was the “Peter” in the folk music group Peter, Paul and Mary. Yarrow’s most famous composition is probably “Puff, the Magic Dragon”, which he co-wrote with Lenny Lipton.

Zebulon Pike was an American Army officer and explorer. On his first expedition for the military, he discovered a mountain in the Rockies that had been dubbed El Capitan by Spanish settlers. El Capitan was later renamed to Pike’s Peaks (now “Pikes Peak”) in honor of the explorer.

The iPad isn’t Apple’s first foray into the world of tablet computing. Apple created great buzz by introducing the Newton MessagePad way back in 1993. This innovative machine was fraught with problems and really died a very slow death, finally being withdrawn from the market in 1998.

Toro is a manufacturer mainly of lawn mowers and snow removal equipment based in Bloomington, Minnesota. The company was founded in 1914 to build tractor engines.