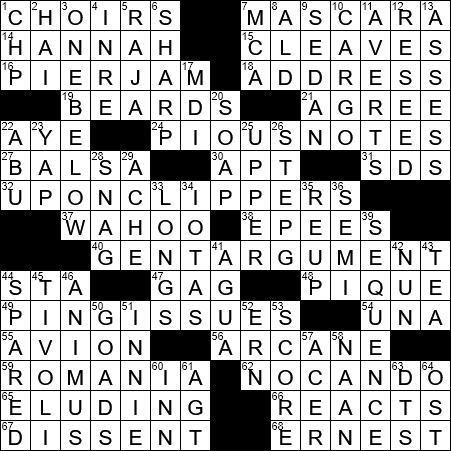 Themed answers are common phrases with an initial CO- removed:

19. Lincoln and Grant had them in common : BEARDS

There is a story that just before Abraham Lincoln was elected president in 1860, he received a letter from a 12-year-old girl who criticized Lincoln’s appearance and his pock-marked, gaunt face. The little girl, Grace Bedell from New York, promised to get her brothers to vote for Lincoln if he would just grow a beard. However, Lincoln waited until after the election to grow his famous whiskers, a distinctive look that would forever be associated with his presidency.

32. Well-versed about sailing ships? : UP ON CLIPPERS (from “coupon clippers”)

A clipper was a three-masted sailing ship commonly crossing the seas in the 19th century. Clippers were built for speed, so were narrow and had less room for carrying freight than many vessels used in trade. They were developed largely due to the demand for speedy delivery of fresh tea from China to Europe. The name comes from the term “to clip” meaning to move swiftly (as in “at a clip”). Perhaps the most famous clipper ship is the Cutty Sark built in 1869, the last clipper to be built as a merchant vessel. The Cutty Sark owes her fame to the fact that she is on display as a museum ship in a dry dock in Greenwich in London.

The una corda pedal is the soft pedal on a piano, usually the pedal situated to the left. Normally a hammer in a piano strikes three strings tuned to the same note. When the soft pedal is depressed, all of the hammers shift slightly to the left so that only two strings are struck.

Orly is a town on the outskirts of Paris to the south of the city. It is home to the Paris-Orly Airport, the second busiest international airport for the city after the more recently built Charles de Gaulle Airport. That said, Orly is home to more domestic flights than Charles de Gaulle.

Romania sits just east of Hungary and north of Bulgaria in Europe. Romania was formed from the union of two principalities in 1859, Moldavia and Wallachia. The Kingdom of Romania grew larger in size after WWI with the addition of three new regions, including the “vampirish” Transylvania.

The California Highway Patrol (CHP) was established in 1929, and merged with the smaller California State Police in 1995. Given these roots, the CHP not only controls the highways, but also provides other services such as protecting the State Capitol and state officials. It is the the largest state police force in the country.

The term “alderman” comes from English law, and is used for a member of a municipal assembly or council. Some cities in the US have a Board of Aldermen instead of a city council.

In Roman numerals, the year 1501 is written as MDI.

Tivoli is an ancient town in Italy, located about 20 miles outside Rome. Tivoli is home to a Temple of Vesta, which dates back to the 1st-century BCE. It is also home to the 16th-century Villa d’Este, which is a UNESCO World Heritage Site.

A goad is a pointed rod that is used to urge on an animal.

Bangalore is the third most-populous city in India and is located in the south of the country. Today Bangalore is known as the Silicon Valley of India because it is a center of excellence for all things related to the semiconductor and information technology industries. I had the privilege of spending a very enjoyable few days working in Bangalore when I was in that line of work …