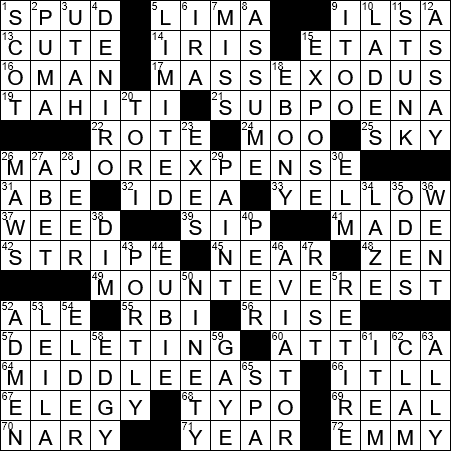 Themed answers comprise two words starting with the letters ME (which sounds like “Emmy”):

72. TV award, and a homophonic hint to the four longest puzzle answers : EMMY

The Utah Jazz professional basketball team moved to their current home in Salt Lake City in 1979. As one might guess from the name, the team originated in New Orleans, but only played there for five seasons. New Orleans was a tough place to be based because venues were hard to come by, and Mardi Gras forced the team to play on the road for a whole month.

“Dirty Grandpa” is a 2016 comedy about a lawyer (played by Zac Efron) who drives his army veteran grandfather (played by Robert De Niro) to Florida. The critics hated this one, and I’ve never seen it …

28. Taunt from the bleachers : JEER

The great English poet William Wordsworth is intrinsically linked with the Lake District in the north of England, where he lived from much of his life. The Lake District is a beautiful part of the country, and I’ve been fortunate enough to visit Dove Cottage in Grasmere a couple of times, where Wordsworth lived with his sister Dorothy …

50. Distance between bases, in feet : NINETY

“The Pearl Fishers” (“Les Pêcheurs de Perles”) is the second most famous opera produced by Georges Bizet, the French composer from the Romantic era. “The Pearl Fishers” is about two Ceylon fishermen (Nadir and Zurga) who are lifelong friends, and the threats to that friendship when the pair fall in love with the same woman (Leila).

“Daycation” is a term used to describe a day trip. A day trip is a visit taken to a place of relaxation or recreation, and returning home the same day.