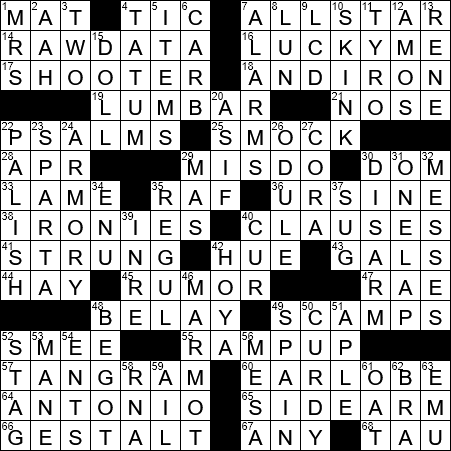 Today’s themed answers are all in the down-direction. To read the complete answer, we have to use the letters ARM that are to one side of that answer in the grid:

A shutterbug is an enthusiastic amateur photographer, someone who likes to hear the click of that shutter, someone like me …

Andirons (also “firedogs”) are those horizontal bars on which you rest logs to burn in an open fireplace. They usually come in pairs and can be quite decorative, and are often made out of wrought iron.

The human spine comprises five regions of vertebrae, which are (starting at the neck):

The Royal Air Force (RAF) is the oldest independent air force in the world (i.e. the first air force to become independent of army or navy forces). The RAF was formed during WWI on 1 April 1918, a composite of two earlier forces, the Royal Flying Corps (part of the Army) and the Royal Naval Air Service. The RAF’s “finest hour” has to be the Battle of Britain when the vastly outnumbered British fighters fought off the might of the Luftwaffe causing Hitler to delay his plan to cross the English Channel. This outcome prompted Winston Churchill to utter the memorable words

In J. M. Barrie’s play and novel about Peter Pan, Smee is one of Captain Hook’s pirates and is Hook’s right-hand man. Smee is described by Barrie as being “Irish” and “a man who stabbed without offence”. Nice guy! Captain Hook and Smee sail on the pirate ship called the Jolly Roger.

Captain Hook is the bad guy in “Peter Pan”, the famous play by J. M. Barrie. Hook is Peter Pan’s sworn enemy, as Pan cut off Hook’s hand causing it to be replaced by a “hook”. It is implied in the play that Hook attended Eton College, just outside London. Hook’s last words are “Floreat Etona”, which is Eton College’s motto. Barrie openly acknowledged that the Hook character was based on Herman Melville’s Captain Ahab from the novel “Moby Dick”.

A tangram is a flat puzzle consisting of seven different shapes that must be arranged to form specific shapes. The game was invented in China, and the name for the puzzle in Chinese translates as “seven boards of skill”. The seven shapes are called “tans” hence the “tangram” name used in English.

Gestalt is a German word meaning “shape”. The principles of gestaltism were developed in Germany in the early 1900s. One of the main tenets is that “the whole is greater than the sum of the parts”.

Upsilon is the 20th letter in the Greek alphabet, and the character that gives rise to the letter Y that we use in English.

Tatum O’Neal is the youngest actress to win a “competitive” Oscar. She won the Best Supporting Actress Award in 1974 when she was just 10 years old, for her role as Addie in “Paper Moon”. The youngest person to win an honorary Academy Award was Shirley Temple, who was only 5 years old when she was presented with an Oscar in 1934.

Actor Ryan O’Neal got his big break in the sixties on television. He appeared in the prime-time soap opera “Peyton Place”, opposite fellow newcomer Mia Farrow. Then in 1970 he landed a starring role in the hit movie “Love Story”, which established him in Hollywood. O’Neal was an amateur boxer before he turned to acting, and established a respectable record Golden Gloves competitions. These days, O’Neal has a recurring role on the TV show “Bones”, playing the title character’s father.

Only relatively small amounts of carbohydrate can be stored by the human body, but those stores are important. The actual storage molecule is a starch-like polysaccharide called glycogen, which is found mainly in the liver and muscles. Glycogen is a quick source of energy when required by the body. Most of the body’s energy is stored in the form of fat, a more compact substance that is mobilized less rapidly. Endurance athletes often eat meals high in carbohydrate (carbo-loading) a few hours before an event, so that their body’s glycogen is at optimum levels.

10. Lizard that can shed its tail : SKINK

A tyro (also “tiro”) is a beginner or a novice. “Tyro” comes into English from Latin, in which “tiro” means “a recruit”.

Amos is one of the twelve minor prophets in the Hebrew Bible.

In the incredibly successful period drama “Downton Abbey”, the patriarch of the family living at Downton is Robert Crawley, the Earl of Grantham or Lord Grantham. The character is played by Hugh Bonneville. Lord Grantham married American Cora Levinson (played by Elizabeth McGovern. Lord and Lady Grantham had three daughters, and no son. The lack of a male heir implied that the Grantham estate would pass to a male cousin, and out of the immediate family. The Grantham daughters are Lady Mary (played by Michelle Dockery), Lady Edith (played by Laura Carmichael) and Lady Sybil (played by Jessica Brown Findlay). Lady Sybil had the audacity to marry the family chauffeur, an Irish nationalist. The shame of it all …

46. Critter in the same family as chipmunks and squirrels : MARMOT

Marmots are large ground squirrels. Included in the genus is the famous groundhog, but not the prairie dog.

“Little Miss Muffet sat on a tuffet eating her curds and whey”, in the popular nursery rhyme. A tuffet is a low seat or a footstool, another word for a pouffe or a hassock. When milk curdles it separates into two parts, the solid curds and the liquid whey. Then “along came a spider and sat down beside her”.

In Australia, the land outside of urban area is referred to as the outback or the bush. That said, I think that the term “outback” can also be used for the more remote parts of the bush.

40. Couple in the news each December : CLAUSES

65. Like some baseball pitches … and a hint to locating the second part of four three-part puzzle answers : SIDEARM

10. Lizard that can shed its tail : SKINK

46. Critter in the same family as chipmunks and squirrels : MARMOT